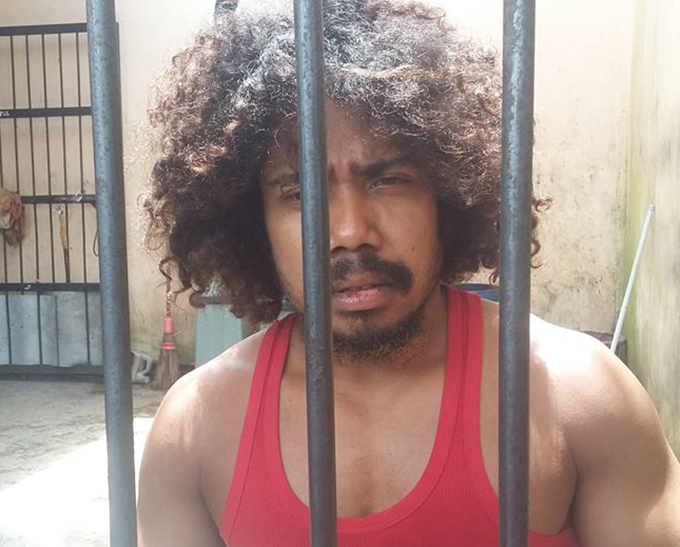 Yanto Awerkion, a young activist who was promoting a petition calling for the UN Decolonisation Committee to become involved in West Papua, was jailed for more that 9 months for “treason”. He will be released shortly due to international pressure. Image: Free West Papua

An advocacy group, West Papua Action Auckland, has urged Prime Minister Jacinda Ardern to raise human rights and the “suffering of the people” of Indonesian-ruled West Papua when she meets with President Widodo on Monday.

President Joko “Jokowi” Widodo, the leader of the largest economy in the Association of Southeast Asian Nations (ASEAN) with two-way trade worth NZ$1.76 billion last year, will arrive in New Zealand tomorrow for a two-day visit.

Our Melanesian neighbours in West Papua are suffering grievously and must not be overlooked for the sake of “good relations” or markets for our goods.

For 55 years West Papuan people have been seeking freedom from repressive military rule, imposed on them in a scandalously unfair process. The loss of life is estimated to be at least 100,000.

Even though the struggle is now mainly about peaceful protest, petitions and diplomacy – there is no let up in security force crack-downs.

In the last three years the police have adopted a strategy of arresting demonstrators en masse, and thanks to a police chief edict, organisations deemed “separatist” are denied the opportunity to hold any kind of gathering.

Blatant breach
This is a blatant breach of the International Covenant on Civil and Political Rights to which Indonesia is a signatory.

Yanto Awerkion, a young activist who was promoting an petition calling for the UN decolonisation committee to become involved, has now spent over 9 months in jail on a treason charge. He will be released shortly – thanks to international pressure.

Last year the International Coalition for Papua documented 10 cases of extrajudicial killings, when the victims were either shot dead during security force operations or tortured to death in custody.

West Papuans say that they are experiencing “slow genocide” and this refers to the impact on their lives of marginalisation and environmental exploitation as well as to shockingly low standards of health and education.

In the remote Asmat area in the last few months there has been a devastating outbreak of measles which, coupled with malnutrition, took the lives of dozens of children.

There are a growing number of Pacific nations who are taking a stand in support for West Papuan self-determination.

So far New Zealand has not supported their initiatives in regional forums and at the United Nations.

So this meeting with President Widodo will be a timely opportunity for Prime Minister Jacinda Ardern and her ministers to demonstrate that New Zealand does support fundamental rights and freedoms, and that principle and compassion have not been forgotten.