EDITORIAL OPINION: Dan McGarry and Marc Neil-Jones of the Vanuatu Daily Post call for media associations and professionals throughout the Pacific to act to protect their freedom.

It’s becoming far too common: Journalists and whistle blowers are being singled out and silenced as governments throughout the region allow the Pacific to slide down the slippery slope of repression.

Either we act now to stop it, or we accept that in ten years, the region’s media may look a lot more like the People’s Daily than The Sydney Morning Herald.

Australia is no exception. Even now, the Coalition government is considering draconian new laws that would outlaw activity that is necessary to the proper functioning of a democracy.

In every country of the world, social media is eroding people’s sense of the truth, and undermining its importance in their daily existence.

In the Pacific Islands, the threat is real. Last week, three veteran journalists in Fiji, all of them with spotless reputations, were detained by police on suspicion of “inciting unrest”.

They had published the news that a magistrate who ruled against the government’s interest in a labour case had been sacked. They were held for hours, and their phones and laptops were seized.

As this editorial is being finalised, Samisoni Pareti, Netani Rika and Nanise Volau are facing the possibility of charges of incitement to sedition.

Inexcusable police action
This action by police, presumably with the blessing of the FijiFirst government, is inexcusable. There is no possible justification for it. It is a direct assault on free speech and the freedom of the media to question the actions of public officials.

The clearly opportunistic prosecution of the publisher and editor of The Fiji Times is a similar travesty. The government is seeking a punishment that is wildly out of proportion with the crime these people are accused of.

Clearly, the government wants The Fiji Times shut down because it tells the truth.

We have to ask: Are the days of dictatorship in Fiji truly past?

In Kiribati too, as details emerged about the tragic—and possibly preventable—sinking of a passenger ferry, we heard that a New Zealand television news crew had their gear confiscated. This is just not on.

None of this justifies punishing people for speaking their mind.

Constant threats
The danger is greater than it has been in a decade.

Media freedom pioneer Marc Neil-Jones suffered assaults, imprisonment, deportation and constant threats as he fought to build and preserve media freedom in Vanuatu. He did not do it alone. Every time he suffered another affront, an uproar spread across the region, making it clear to the government of Vanuatu that there would be consequences for their ill-advised actions.

Now, government and civil society leaders gather in Nauru, and not a peep is heard about their government’s serial abuses of freedom of speech and human rights.

Fiji subverts the entire media establishment, and nothing is said. Kiribati outright says “stop reporting on this story”, and aside from a few angry squawks, nothing happens.

The very governments who claim to defend democracy and Western values don’t seem as married to them as they once were.

We need to realise something: Either we speak up now and draw a clear line under freedom of speech, or we write it off in the Pacific region.

The right to express oneself is not granted by governments. Constitutions don’t give these rights either. They recognise them.

How high a price?
These rights existed before we were born, and they will continue to exist whether we admit it or not. The only question, really, is how high a price do we have to pay to exercise them? Detention? Imprisonment? Deportation? Assault?

This is not an abstract discussion. The truth matters more than ever, and media professionals across the Pacific need to understand that time is not on our side.

Across the globe, people are beginning to see the damage caused by Facebook’s pernicious influence on people’s perception of what’s true. It’s felt in small communities more intensely than anywhere else. A few unprincipled and unrestrained people are playing fast and loose with the truth, and ruining people’s lives in the process.

If our professional media associations were doing their job, they would set an example for others to follow. Instead, they cower, just as they’ve done in the face of government repression.

And now, the worst excesses of social media are being used as justification for even more suppression from these same governments.

In Vanuatu, Basil Leodoro, a highly respected doctor, was suspended from his job by the Public Service Commission for months because he spoke his mind. Both his manager and the Director-General of Health confirmed to the Daily Post that the reason for his suspension was his open letter to the Prime Minister questioning millions of dollars of spending during the Ambae island evacuation effort.

Only after it became clear that the pressure was not going to let up did the PSC grudgingly reinstate him. And even as they did, they salted the wound with unsubstantiated accusations that he had stolen money, and that letters supporting him were obtained by coercion.

A press release issued by a Public Service Commission official accused Vanuatu media of “biased and excessive” reporting on the suspension.

Clearly the government of Vanuatu needs to learn—again—that free speech is fundamental to democracy. There is nothing more important than the right to speak, free of coercion. We stand with Dr Leodoro, and with everyone who speaks their mind honestly and fairly.

Speak up for the truth
If we don’t reaffirm this now, if we don’t repeat this chorus loud and long, we will lose our democracy.

In New Zealand and Australia, in Fiji, in Kiribati, in Nauru—across the entire region—media professionals need to stand up and speak in defence of the truth. We need to set an example for others, show them how responsible, principled, fair and fearless reporting comes about.

Across the Pacific, our national media associations have to find the courage to speak again. The Pacific Islands News Association (PINA), absent all these years, needs to stop being a hollow excuse for biannual junkets, and do its job.

PINA used to be at the forefront of press freedom in the region. Now as a result of a dominating broadcast sector they have lost the plot when it comes to issuing statements critical of government attacks on press freedom.

Nobody is going to do this for us. If we don’t act, our governments will. And that won’t end well for any of us. 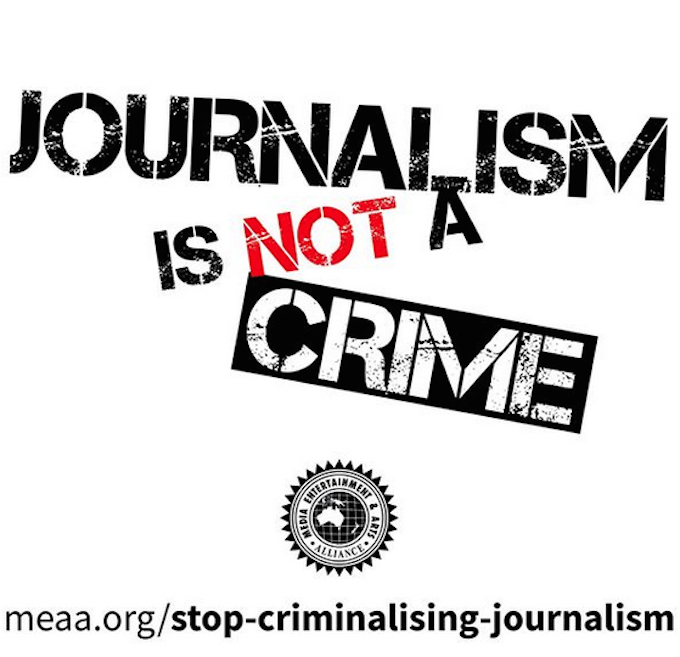