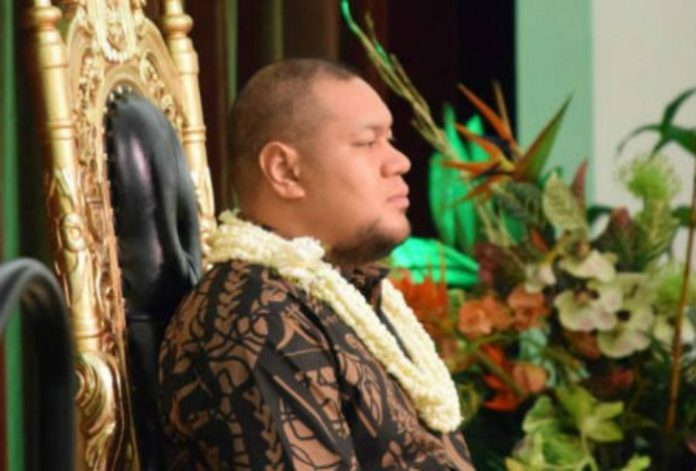 By Kalino Latu in Auckland

King Tupou VI’s second son is the lawful successor to the hereditary noble title and estate of Ata, it has been announced in the kingdom of Tonga Gazette.

It said Viliami ‘Unuaki-‘o-Tonga Mumui Lalaka-mo e-‘Eiki Tuku’aho was entitled to the hereditary estate belonging “to the title to which he has succeeded together with the rents and profits thereof and all other rights and privileges attached to the title as from 25 September 2006”.

The King’s order comes after he sent former Prime Minister Lord Tu’ivakanō and some royal guards to intervene in a baptism ceremony that would have made Prince Ata a Mormon three years ago.

The prince drew back, but a year later he was baptised as a Mormon in Hawai‘i.

As Kaniva News reported at the time, an unconfirmed report said the King later warned Prince Ata he could have some of his princely privileges revoked if he was baptised into the Mormon church.

It is believed he was the first prince of Tonga to become a Mormon after his aunt, the late Princess ‘Elisiva Fusipala Vaha’i, became the first member of the royal family to join the Church of Jesus Christ of Latter-day Saints in the 1980s.

The Tongan constitution does not say that successors’ rights to the throne will be affected by their religious beliefs.

The royal family are members of the Free Wesleyan Church of Tonga.

It was unclear why the announcement was published on November 23, 2017 more than 11 years after the 29-year-old prince was appointed in 2006.

Prince Ata’s estates
Prince Ata is fourth in line to the throne. The noble title was previously held by his father.

In 2006, the palace office announced the late King George V had appointed him to the noble title Ata.

It said the appointment was to be effective from September 25, 2006.

Ata’s hereditary estates are Kolovai in Tongatapu and the island of ‘Atatā, 10 kilometres North-West of Nuku‘alofa.

As Kaniva News reported last year, Prince Ata had joined Mormon church leaders who held the first Sunday prayer service for members of the Church of Jesus Christ of Latter-day Saints on the island of ‘Atatā.

The service marked a milestone in the history of the Mormon church on the island.

In the past they have had to make a 30 minute crossing to Tongatapu, the main island of Tonga, to attend Sunday services and church meetings there.

The Gazette
The announcement by His Majesty’s Lord Privy Seal Tēvita Malolo is published verbatim below.

“In Exercise of the powers conferred by Section 38 of the Land Act, His Majesty King Tupou VI hereby Orders to be published in the Gazette that:

Viliami ‘Unuaki-‘o-Tonga Mumui Lalaka-mo e-‘Eiki Tuku’aho is the lawful successor to the hereditary noble title and estate of: ATA and shall possess and enjoy the hereditary estate appurtenant to the title to which he has succeeded together with the rents and profits thereof and all other rights and privileges attached to the title as from 25 September 2006.”

The Land Act
The relevant provision of the Land Act says:

“King to publish name of lawful successor (1) Upon the death of a holder of an hereditary estate or upon being convicted of a criminal offence and sentenced to imprisonment for more than two years or upon his being certified as insane or imbecile by a medical officer,

His Land Act CAP. 46.02 Section 39 to 2016 Revised Edition Page 25 Majesty shall cause the name of the lawful successor to the title of such holder to be published in the Gazette together with the date of his succession thereto which shall be the day following that on which the death of the holder took place or on which the holder was convicted of a criminal offence and sentenced to imprisonment for more than two years or was certified by a medical officer as insane or imbecile.

25 (2) On a convenient day not more than 6 months after the date of such publication, or, where the lawful successor is on such date a minor, 6 months after the day he attains the age of 21 years, His Majesty shall summon the person so named to appear before him in the Privy Council and there to take the oath of allegiance set out in Schedule VII. (3) The clerk of the Privy Council shall keep a roll of all persons holding hereditary estates.”