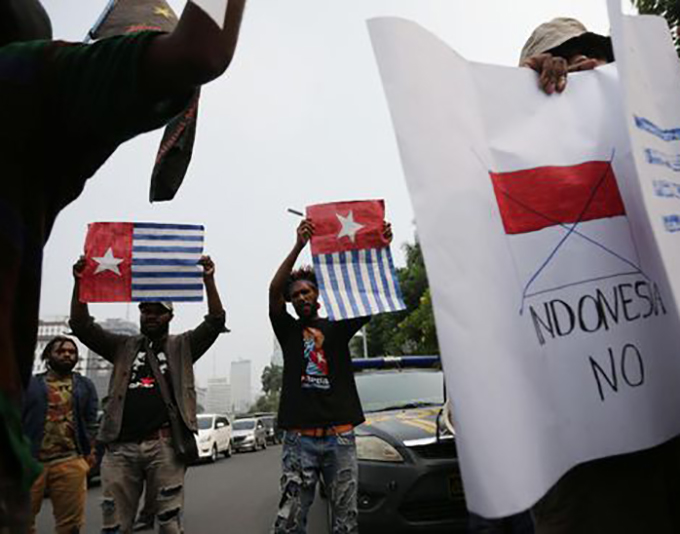 By Lalu Rahadian in Jakarta

Conflicts in Papua province will not be resolved until the Indonesian government provides the Papuan people with an opportunity to determine their future through an international forum, says a leading advocate.

Indonesian People’s Front for West Papua (FRI-WP) spokesperson Surya Anta says that the root of the Papua problem is Indonesia.

According to Anta, the government must allow the Papuan people to determine their own future instead of continuing its “colonisation” there.

“West Papua is under Indonesian colonialism. If we go back historically, at the time of [Indonesia’s] proclamation [of independence on August 17, 1945], the territory of Papua was not part of Indonesia,” Surya said during a press conference at the Jakarta Legal Aid Foundation (LBH) this week.

Anta expressed this view in response to the reemergence of conflict in Tembagapura, Mimika regency, Papua.

The Indonesian police say that in these districts — using police terminology — the activities of an Armed Criminal Group (Kelompok Kriminal Bersenjata, KKB) have resulted in access to the villages of Banti and Kimbely being “disrupted”.

Papua police chief Inspector-General Boy Rafli Amar has responded to the activities of the KKB by issuing declaration Number B/MKMLT/01/XI/2017 dated November 12, 2017, calling on the KKB to surrender.

‘Disarm yourselves’ call
Amar has asked that all civilians who control, carry, own or use firearms illegally to disarm and surrender them to the authorities.

Amar also claimed that the KKB was holding hundreds of local people “hostage” in two villages in Tembagapura.

According to Anta, the police’s claims about the residents in the villages in Tembagapura are untrue, issuing a counter claim and saying no one had been taken hostage there.

“What we did immediately was communicate with civilian groups there. They confirmed that that no residents had been taken hostage,” he said.

In Anta’s view what has been done by the Free Papua Movement-National Liberation Army (TPN-OPM) in Tembagapura has a clear political basis — to wrest sovereignty from the Unitary State of the Republic of Indonesia (NKRI).

Nevertheless, said Anta, labelling the TPN-OPM an “armed criminal group” was an attempt to discredit them and labelling the group in Tembagapura KKB also obscured the roots of the problem in the “Land of Cenderawasih” (Bird of Paradise, West Papua).

“Their political basis is winning sovereignty for the West Papuan nation which is under the colonialism of the NKRI,” he said.

Anta also called on the government to immediately withdraw all security forces from Papua, close the PT Freeport gold-and-copper mine, release all political prisoners and open up access to journalists so that the problems in Papua could be clearly seen.

Infrastructure not the solution
The Papua Student Alliance (AMP), meanwhile, believes that the ambitious infrastructure development programme in the Land of Cenderawasih does not answer the basic problems of the people there.

According to the AMP and FRI-WP, the main problem in Papua is a political one.

Speaking in the same vein as Anta, AMP activist Frans Nawipa says that the frequent conflicts that take place in Papua can only be resolved if the government allows the Papuan people to leave Indonesia (NKRI).

“The root of the problem is [Papua’s] political status which was manipulated by Indonesia and the military in the 1960s. No matter how long the government pursues the development approach, it will not have the potential to answer to the problems in Papua,” said Nawipa.

Nawipa claims that no one in Papua has asked the government for this development.

Because of this therefore, the efforts by President Joko “Jokowi” Widodo to develop the country from Papua would not have any significant impact.

Surya Anta added that the construction of the Trans-Papua highway in the Land of the Cenderawasih would not be able to replace the lives that had been lost as a result of the “slaughter” by security forces.

“What is needed is political freedom, freedom from all types of colonialism, self-determination as a national entity”, said Anta.

Since Widodo became president in 2014, infrastructure development in Papua and the country’s borders has been one of his priorities.

Translated by James Balowski for the Indoleft News Service. The original title of the article on CNN Indonesia website was “Desakan Papua Merdeka Kembali Mengemuka”.