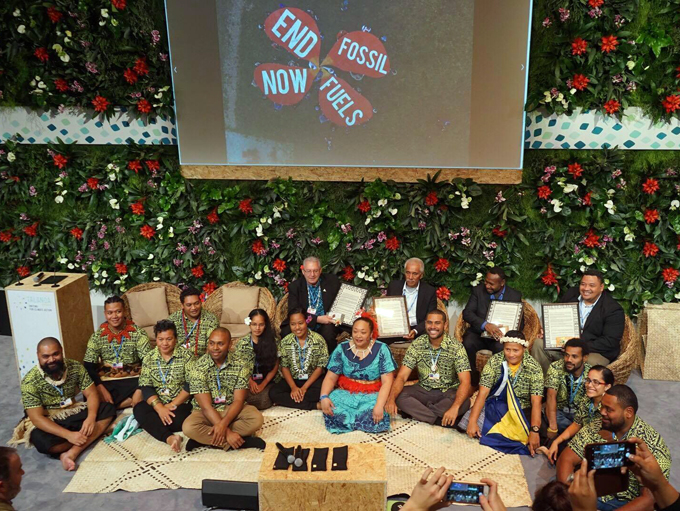 “We all stand together as one family” … Pacific Climate Warriors Declaration on Climate Change presented at COP23. Image: 350 Pacific

Climate activists from across the Pacific region have presented a declaration on climate change to key Pacific environmental leaders at COP23.

The Pacific Climate Warriors Declaration on Climate Change, part of 350’s Have Your Sei campaign, was signed by more than 23,000 people and called on world leaders to take effective action on climate change by placing the voice of the people above that of the fossil fuel industry.

350 Pacific’s Pacific Climate Warriors made the bold call in September to ensure the region’s leadership on climate change was recognised and the Pacific’s voice heard.

Similar calls were made at the talanoa gathering place in the Bonn Zone.

The Samoa Planet reports the group’s Tokelauan representative challenged the rest of the world to follow the nation’s example of the first to be powered by 100 percent renewable energy, a transition which is called for in the declaration.

“We all stand together as one family,” they said, and continued with a call to “Kick the big polluters out of climate talks,” Lani Wendt Young reports.

The call echoed a plea made by the Pacific Climate Warriors on the eve of COP23 to end the era of fossil fuels.

‘Healers, not harmers’
The declaration was printed on tapa cloth, with framed copies presented to key Pacific environment leaders, including Francois Martel, the Secretary-General of the Pacific Islands Development Forum and the former President of Kiribati and global advocate and climate warrior, Anote Tong on Wednesday.

The presentation opened with a lotu and blessing offered by climate warrior, Reverend James, who prayed for an increased spiritual awareness of the earth and ocean.

“May we be healers, not harmers.”

Pacific leadership on climate change and its recognition called for by the Pacific Climate Warriors, has been symbolized in the Bonn Zone’s talanoa space and the renaming of the facilitative dialogue process to “talanoa dialogue”.

The Fiji Times reports the “talanoa spirit” which characterises Fiji’s presidency of COP23 has extended into open dialogue between the COP parties and non-state actors.

“This is the first open dialogue between parties and non-parties in the history of the COP process. It’s not a side event. It has been mandated by the parties and is designed to bring state actors and non-state actors together in the Bula Zone.

“I’m delighted as COP23 president that we have been able to connect in this manner. Because it goes to the heart of the grand coalition concept that Fiji has been promoting all year.

Adopting talanoa spirit
“We will not be negotiating. We will be talking to each other. And we will be listening. This is the perfect setting for adopting the talanoa spirit that is so much a part of what Fiji brings to the presidency.

“Together, we should learn how to engage all levels of government, civil society, the private sector and billions of ordinary citizens in the formation of the national plans for climate action,” Fiji’s Prime Minister Voreqe Bainimarama said.

Bainimarama also called for frank and open discussions around what was and was not working in the fight against climate change, FBC reports.

“We must also be honest about what is not working. Because the Talanoa Spirit isn’t just about being nice to everyone, although respect is essential.

“It is about contributing to a solution that requires a degree of straight talking. And whoever you represent today, I encourage you to embrace that spirit, honest, constructive dialogue for the common good,” he said.

One new NZ case of covid in isolation as Bloomfield says...