By Kendall Hutt in Auckland

The exploration by Sydney-based company Metgasco faced a five-year long opposition from the community of Bentley, where a 2km deep well was to be drilled on an old dairy property.

Several weeks before the planned drilling operation in 2014, thousands set up camp on a neighbouring property in a protest which made headlines and was dubbed the Bentley Blockade.

The blockade is the subject of multi award-winning feature-length documentary The Bentley Effect. 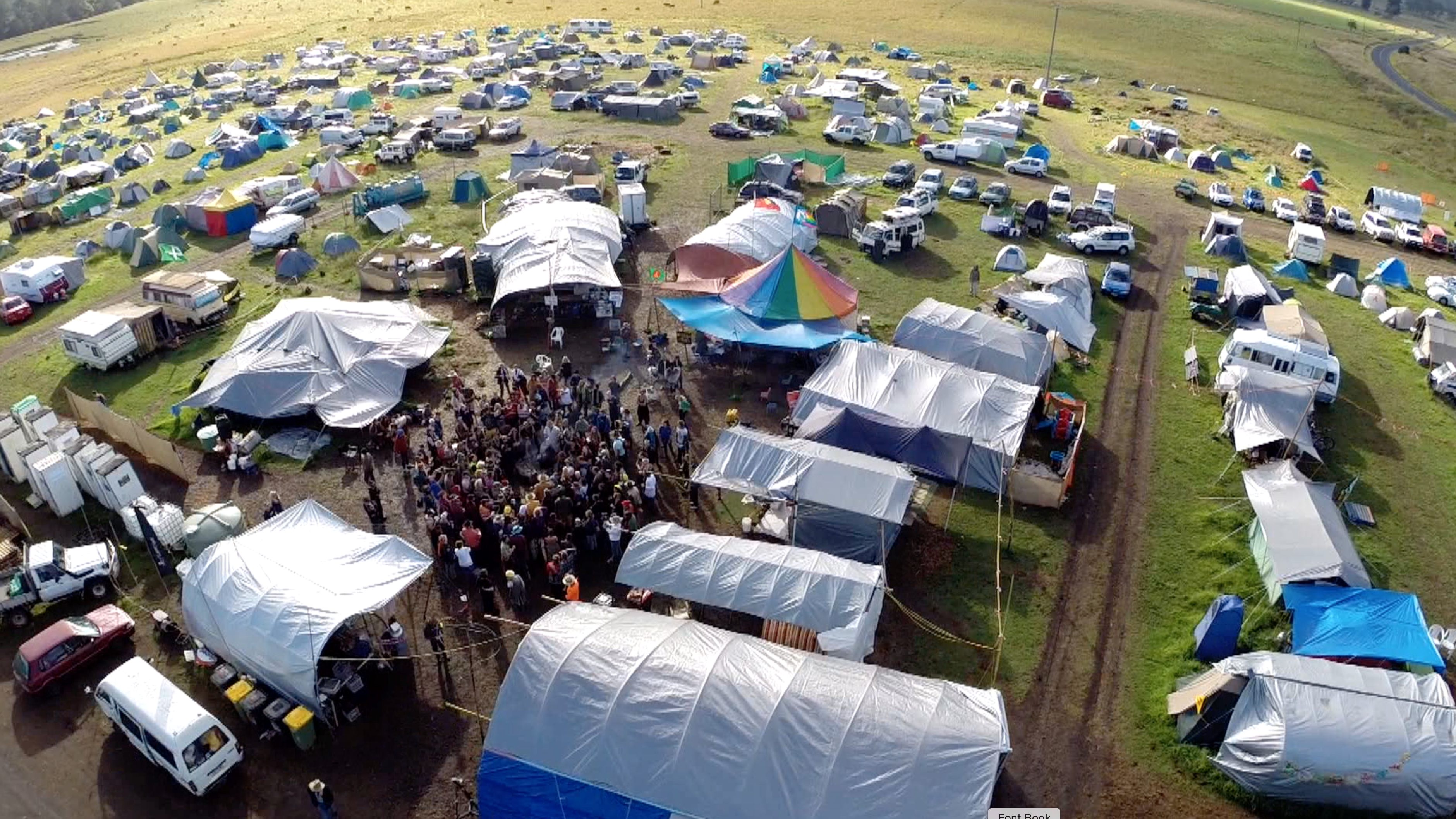 The Bentley Blockade … “We don’t want to live in a gas field”. Image: Brendan Shoebridge

“The documentary chronicles my community’s response to the threat of unconventional gas mining and the industrialisation it brings.

“Although gas mining is the vehicle, it’s more about what community can do when it comes together.

“In this case, the community drew a line in the sand, came together en masse and said ‘No we don’t want to live in a gas field’.

Shoebridge has been in New Zealand since late September screening his documentary across the country.

He spoke to Asia Pacific Report ahead of the documentary’s last screening in Auckland at an event organised by Greenpeace, 350 Aotearoa and Fossil Free UoA.

Shoebridge said he hoped the spirit behind The Bentley Effect inspired a similar stand in New Zealand.

“New Zealand’s unique and precious beauty holds a special place in everyone’s hearts and I’m hoping the film will inspire local audiences to keep it safe and pure,” he said.

Asked why this was the case, Shoebridge told Asia Pacific Report it was due to “massive threats” to the country and its “brand”.

These threats included prospecting by New Zealand Oil and Gas in a massive gas field more than 60km off the coast of Oamaru and proposed oil and gas exploration off the coasts of Canterbury and Taranaki in the habitats of endangered Hector’s dolphins and blue whales.

Risk versus profit
“Really the last thing we need is more methane and another fossil fuel industry.

However, Shoebridge said New Zealand’s response to the documentary had been “fantastic” and it seemed to resonate with Kiwi audiences.

“New Zealand has a rich, proud heritage of protest.

“There is so many examples of successful non-violent civil disobedience.

“I think the story really does resonate quite powerfully here” he said.

Bentley Effect ‘solution’
The Bentley Effect not only showed the problem of exploration, it showed what the world could do about it, he explained.

“What viewers will see is a social movement from start to finish. 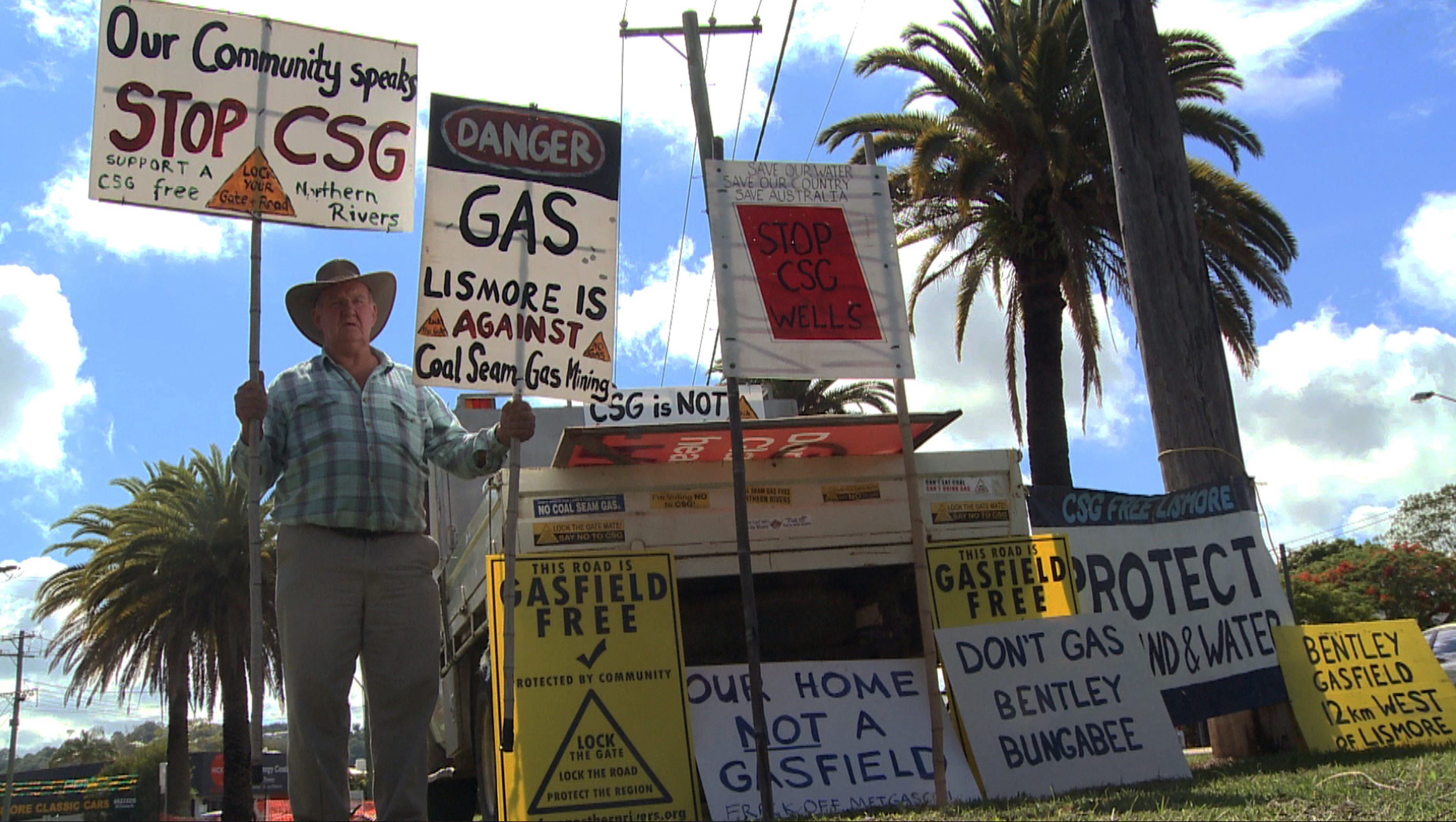 “Audiences can see for themselves how people mobilise. How ordinary, everyday people took a lead and made massive contributions in their own way.

“That was a key aim in showcasing what happened in Bentley – communities aren’t powerless, they can push back on these things.”

Shoebridge said at the time of the blockade, 50 wells had already been drilled.

However, due to the broad-based social movement’s opposition, Shoebridge said, the State Government was not prepared to pay the political price, despite earlier being “hell-bent” on pushing its gas plan through.

“To get that overturned and those wells decommissioned and the licences removed was a real achievement,” Shoebridge said.

Shoebridge said Bentley’s stand against big business and its own government had set an “amazing” precedent in the war against natural gas.

“I think a lot of communities around the world will draw strength from what was achieved” he said.

Bentley’s story was also “universal”, Shoebridge said, as similar battles were happening across the globe.

“These battles are happening everywhere and they’re playing out on all sorts of different fronts, but it’s essentially the same battle.

“When people come and see the film, I think they are drawing a lot of strength and probably seeing that the same strategies can be superimposed onto any of our battles, whether it’s the fight for clean water against big dairy, 1080, fluoridation, or logging.”

Youth involvement key
Shoebridge said a “big chunk” of the solution in battling such environmental and social injustice issues was people taking a lead with their skill set in their landscape.

“I think if everyone did that we’d smash our problems pretty quickly.”

Youth have a particular role in “smashing” problems in a world where political will on “climate chaos” was lacking, Shoebridge added.

“From our experience politicians don’t respond to education they only respond to pressure.

“That’s where the youth can come in. They can talk from the heart and talk about what it feels like to have your future robbed from you.

“Naturally the youth are going to feel varying degrees of despair and powerlessness, but we can’t afford to give up hope and we mustn’t.

“Anything that tops up their tanks and inspires meaningful action is a good thing,” Shoebridge said.

Although his work is largely about hope, Shoebridge warned the world needed to come together in order to face the “tough times” ahead.

“I know we all have to start thinking in terms of a global village rather than national borders because we’re all in this together and we’re all going to pay the same price if we don’t meet those challenges.”

The Bentley Effect screens tomorrow 4pm to 7pm at LibB28 at the University of Auckland and includes a Q+A with Shoebridge and key members of the documentary. 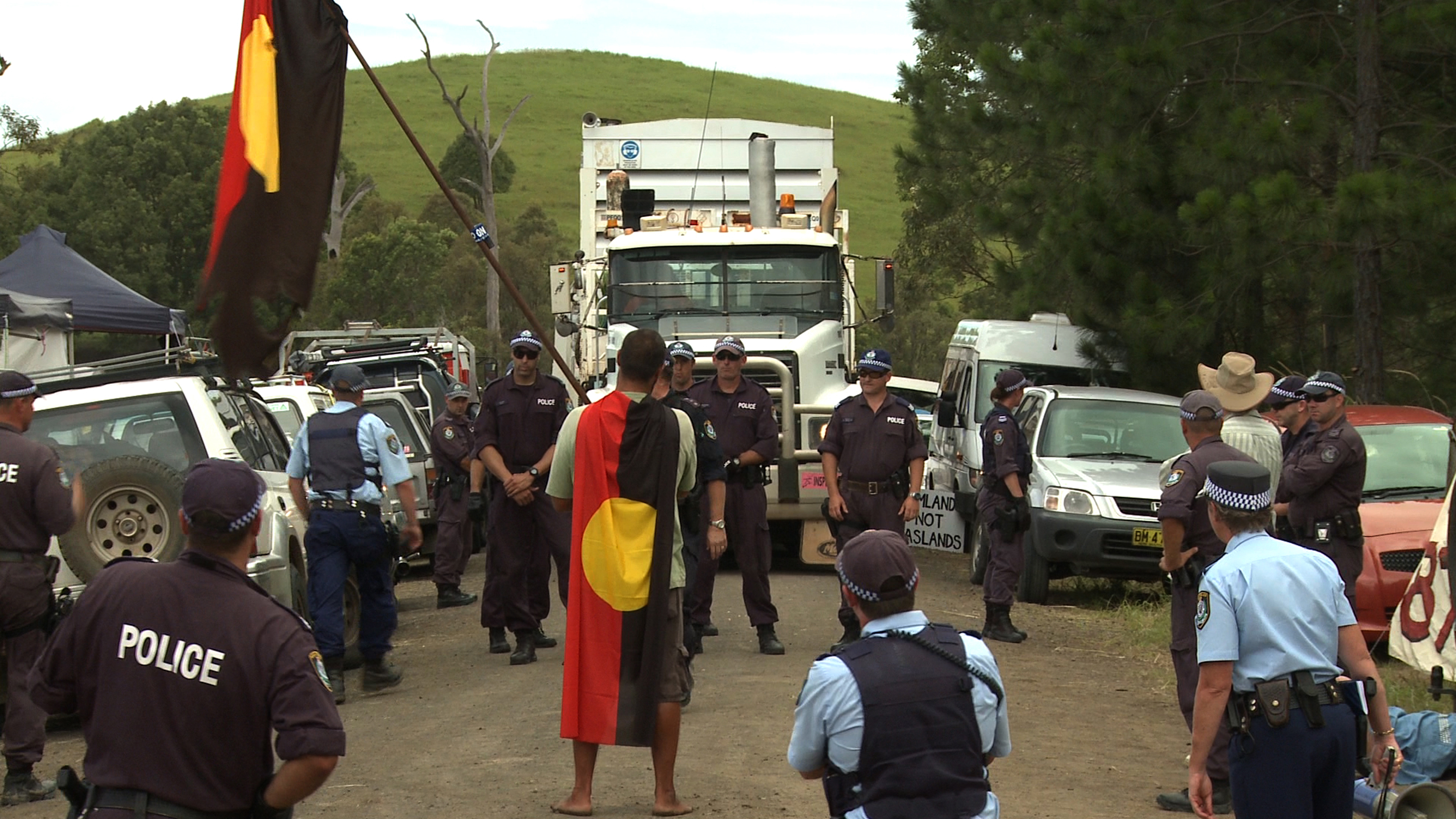