By Keith Rankin, column first submitted to TheDailyBlog.co.nz I ENJOYED CHRIS TROTTER’s The Common Affairs Of The Whole: Why National is so bad for Capitalism in The Daily Blog last Friday. To reinforce Trotter’s point, capitalism works best when all capitalists bear the costs that they incur. Capitalists themselves, motivated by self-interest, want the costs they bear (but not necessarily the costs they incur) to be minimised. Thus capitalists are more than happy to have someone else bear their costs. National Governments, Trotter argues, are too close to capitalists, and so are prone to favour the sorts of cost-shifting and circulation-stifling policies that eventually undermine capitalism. Trotter says of arch-capitalist Henry Ford: [caption id="attachment_2964" align="alignleft" width="300"]

Henry Ford posing next to a Model T.[/caption]

Ford’s vision was clear – but narrow. He could see the advantage of paying his workers enough to purchase the Model-Ts they were putting together on his production lines, but he never made the next conceptual step: the one that would have allowed him to conceive of a society in which the working-class was paid enough, collectively, to consume its own production. This was capitalism’s equivalent of a perpetual motion machine (assuming, of course, that capitalism had somehow discovered a way to exempt itself from the laws of planetary thermodynamics).

So is there a capitalism equivalent of a perpetual motion machine? A good analogy for the circulation of incomes and spending – an analogy that dates back to Thomas Hobbes and William Harvey in the seventeenth century – is that of the circulation of the blood through the mammalian body. While it’s a good representation of an equilibrium system, the human body is certainly not a perpetual motion machine, relying on outside inputs such as food and drink and sunlight. The French économistes – called the ‘physiocrats’ in English – developed the idea in the eighteenth century. Their concept of the ‘net product’ captures the idea of a surplus that is made possible by nature’s external contribution that otherwise enables the free market ‘clockwork’ to work. (A pendulum clock is the closest analogy in the physical world to a perpetual motion machine.) The économistes emphasised the circular flow mechanism. François Quesnay, the founder of this school of economic thought, was himself a doctor. I have played around with the analogy – Circular Flow: Drawing Further Inspiration from William Harvey (2012) – useful because so many who dabble in the dismal science completely ignore the fact that total incomes must equal total spending, much as arterial blood flow should equal venal blood flow. I adopted the approach that it is the capitalists who represent the head of the market economy of goods and services and finance; not the ‘sovereign’ as a seventeenth century writer would have assumed. I place the governments as the right hand, and the workers as the left hand. In 2014 George Cooper employed this analogy – and others – in his interesting book Money, Blood and Revolution. Cooper looked at scientific revolutions in astronomy, biology, medicine and geology and concludes that each of these disciplines was vastly simplified following their revolutions. Economics’ revolution, he claims, is long overdue. (In large part the problem is our backtracking on, rather than our development, of Keynes’ macroeconomics.)  In the latter part of Cooper’s book he notes that when capitalism is working well ‘money’ flows easily through the different levels of the social-economic hierarchy. When it’s not working well, capitalism relies too much on debt. (Excess debt can be likened to a drug that frees up clogged arteries, but has potentially dangerous side-effects.) So we could say that capitalism that relies on huge debt imbalances is capitalism treating the symptoms of arteriosclerosis. In terms of Chris Trotter’s argument, and my argument too, Labour’s policies (or at least those based on egalitarian philosophy) get that spending (‘money’) flowing both through the right hand of the public interest and through the left hand of the working class. Unhealthy capitalism is when the capitalists themselves hoard their incomes. Think of a person with a bloated head and chilblains in their hands. That’s a result of management of capitalism that’s too soft on the capitalists. Democracy should be good for capitalism, because the workers outnumber the capitalists.

Before finishing I should note that economic policymakers love economic growth. The perpetual motion analogy falls down somewhat here. Indeed that’s why we cannot think of 1950-80 as being the system working as such a machine. Yet, the fire in capitalism (fuelled by the twin forces of demand and supply), can create a growing circulating system for long periods of time, though not forever. Perhaps we can use the analogy today of the blood-circulation of a 15-year-old, still growing but past the biggest growth spurt. Whereas blood flowing to the left and right hands in the past stimulated economic growth, in the future it is needed to forestall systemic collapse. Then finally, we should be careful with analogies like perpetual motion machines. Unscrupulous readers may simply associate such a concept with ‘cranks’, the easily dismissed though sometimes very clever people, some of whom have made extraordinary contributions to our techno-modern 21st century lives. Stephen Johnson’ recent PBS/BBC TV series How We Got to Now explores the contributions to modern economic comforts by a range of clever people who few of us today have ever heard of, and who were generally intellectual outliers in their own times. Their legacies remain forever in the public domain. One such unusual person in the past, who we all have heard of, was Isaac Newton. In the first half of his career he was a committed alchemist who also did some really good science and maths. In the second half of his career (as a sound-money man; warden and then master of the Royal Mint) he prosecuted counterfeiters. He hanged people who helped capitalism to flow at a time when the monetary system became somewhat constipated. He made a lot of money through his employment, though he lost much of his share in the South Sea Bubble of 1720. Despite his foibles, we have much to thank Newton for. 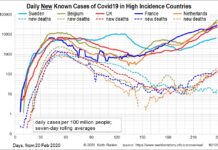 Keith Rankin Analysis – Public Debt: Pay it Back or Pay it Forward?