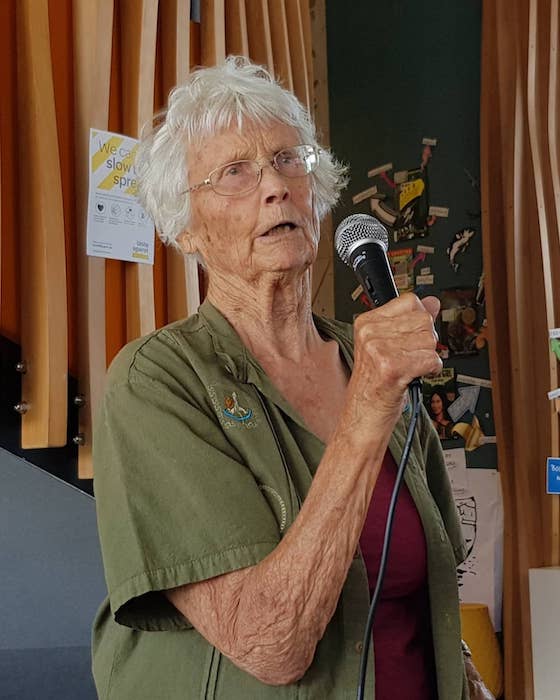 Introduction for the book launch of The Nine Lives of Kitty K by Margaret Mills
Waiheke Library, Waiheke, 27 February 2021

AUTHOR Margaret Mills and I go back a long way. All the way back to 10 July 1985 (and a bit before) when a certain environmental ship sank in Auckland Harbour in outrageous circumstances that sent shocked headlines around the world.

The fateful bombing of the Rainbow Warrior by French secret agents has etched its memories deeply into our lives – and the lives of many activists on Waiheke Island. This is how I first came to get to know Margaret as a journalist on board the Greenpeace flagship when researching one of my own books, Eyes of Fire: The Last Voyage of the Rainbow Warrior.

As it turned out, while it might have been the last voyage of the original Warrior, two more campaigning ships of the same name came in its wake.

As we all know, You can’t sink a Rainbow!

Recalling that moment in Eyes of Fire, I wrote that Margaret Mills woke with a jolt. She thought there had been two explosions. Immediately before the engineroom blast, somebody had dropped the gangway on deck. She could hear water gushing into the ship. It sounded like somebody had left the firehose cock running. In spite of no lightbulb in the cabin, Margaret managed to pull on her tracksuit and sneakers. But she couldn’t find her glasses. She couldn’t find her way around without them.

Andy Biedermann, the ship’s doctor , appeared in the cabin doorway and grabbed her.

Like the nine lives of the heroine of Margaret’s debut book, Kitty Kirk, Margaret was safe.

One of the many positive things that Margaret says about her Rainbow Warrior experience was gaining a whole lot of new friends – 20 years or so younger than her, like me. Many of them living on Waiheke.

Margaret, it is truly a privilege to be standing here today alongside you, to have the honour of introducing you and launching your book … and even humbly sharing your limelight.

At 91, you have lived an extraordinary life and are an inspiration to us youngsters.

Just like your heroine Kitty K, who discovered at the age of 12 she was a horse whisperer.

This 378-page book spans generations across a century in the tough Otago pioneering days and the tail end of the gold rush … and Margaret is already 900 words into her next book.

The genesis of The Nine Lives of Kitty K is truly remarkable. Margaret Mills is a consummate environmentalist, community activist and story teller. And her rich recreation of the life of Kitty Kirk in the 19th century echoes in some respects Margaret’s own life, in the sense of battling the odds, her tenacity to triumph in spite of the obstacles, and to do so with honesty, gutsiness and warm humanity.

This book has been mulling around in Margaret’s mind for almost four decades, longer than I have known her. Ever since she promised her main informant Winnie Mulholland back in Queenstown in the mid-1970s that she would “get the story out”.

However, earlier on Margaret was far too busy with her own life and her own nature reserve block at the top of Trig Hill Road to be able to sit down at a typewriter – as in the early days – or a computer to write this epic period saga.

In fact, I didn’t know it then but when Margaret was on board the Rainbow Warrior as relief cook (in the place of Natalie Mestre) back in July 1985 she had been writing the narration for a play script based on the Kitty K story. Two acts had already been drafted thanks to the encouragement of a director.

And then she had completed a third act and was ready to send it off. But it sank with the Rainbow Warrior and that was the end of that.

After countless afternoons as a postie listening to Winnie Mulholland relate the tales of Kitty’s life over cups of tea over a six-month spell, her original draft was a 12-page overview that found its way into the Lake County Museum.

Ironically, a heart attack suffered by her partner Trevor Darvill in 2016 gave an opening for her to begin writing this book as she was spending more time at home supporting Trevor. And now here it is – the published success 27 drafts later.

Kitty K, who was born in 1855 and died in 1930, had a reputation for incredible bravery with hair-raising horse rides on the cliffside tracks in Skippers that continued long after her death.

In fact, it is Margaret who brought the memories alive through her painstaking research and storytelling skills.

Margaret was partially inspired to write this book by a poster of the Battle of Omdurman – and her knowledge of this obscure 1898 British army triumph – which gained the confidence of Winnie Mulholland.

I have to confess, Margaret, that I knew nothing about this battle either until you mentioned it to me and I had to Google it.

It was during the British army’s invasion of Sudan when General Kitchener defeated the Mahdi’s forces, naturally claimed to be twice the size of the imperial brigade. Today Omdurman is a suburb of the capital of Khartoum.

Like Kitty K, you’re a legend. In your case, a living legend.

Kia kaha manawanui, Margaret – congratulations on the launching of The Nine Lives of Kitty K.