By COHA
From Washington DC

Renowned scholar Steve Ellner offered an insightful analysis of the December 6, 2020 parliamentary elections in Venezuela which took place in the midst of severe hardship imposed by a US blockade, a pandemic, and a US-EU backed campaign to boycott the election.

The COHA webinar, titled “The National and Regional Impact of Parliamentary Elections in Venezuela”, took place on December 17 from Washington DC through Zoom and Facebook Live.The panel also included Margaret Flowers, Director of Popular Resistance, one of the final four defenders of the Venezuelan embassy in Washington, DC in the spring of 2019, and who was in Venezuela during the December 6 elections as an electoral observer. Professor Danny Shaw, Senior Research Fellow at COHA, who was also in Venezuela as an observer, joined the panel as well from Dominican Republic.

In summarizing the political consequences of these parliamentary elections, Ellner disagreed with those opposition figures who maintain that Maduro emerged as a loser. “I don’t think so. I think it is just the opposite. I think the election results were a victory for the Chavistas and even more so, it was a victory for a broad group that includes the Chavistas but also the moderate opposition that participated in these elections.”

Professor Ellner added that “the forces in favor of dialogue, against the sanctions, those are the forces that went out on December 6.” He highlighted the fact that even two-time presidential candidate for the opposition, Henrique Capriles, is asking the international community to no longer recognize Juan Guaidó  as “president” of Venezuela. Professor Ellner explained that Capriles’ message seeks to persuade the incoming Biden Administration to move away from Guaidó and to support Capriles, as a representative of a faction of the radical opposition.

While Ellner said that there is a lot of distortion of the Venezuelan situation in the mainstream media, he also warned progressive sectors against oversimplifying the politics of the country.  “We have to get away from the idea, the utopian idea, that things are black and white,” he explained.

He reminded the audience that the current sanctions that are harming Venezuela are not the only factor  causing the economic crisis in the country. “The war on Venezuela has been going on since the first year of the Chávez presidency (…) It didn’t begin with Trump. Obama also implemented sanctions,” explained Ellner.

He also analyzed  the low turnout of around 31%, which he explained is a new normal for several countries, not only Venezuela. “It is not a surprise to have low participation in elections in Venezuela”, Ellner said. The country is deeply “affected by the fall of oil prices” that have always created political instability in the country. He added that there were “a lot of impediments that affected electoral participation”, including the big factor of the COVID-19 pandemic, the gasoline shortage that affected the access to transportation to vote, and also the fact that 3 to 4 million Venezuelans have emigrated, in circumstances that the vote from overseas is only allowed for Presidential elections. Ellner also indicated that there had been some erosion in support from the Chavista base, compared to past elections of Hugo Chávez, but that this must be understood in the context of years of attacks on Venezuela.

In response to a follow-up question, Ellner agreed that the Maduro administration has pivoted  towards encouraging more private investment as well as public–private partnerships. Margaret Flowers added that a coalition of  Chavistas that criticize the PSUV from the left, under the umbrella of the Communist Party (the Popular Revolutionary Alternative) oppose the new anti-blockade law which would facilitate private investment, but that it remains loyal to the common cause of defending the country from outside intervention.

Margaret Flowers also answered a question from the audience regarding the successful story of Venezuela in terms of the fight against COVID-19. She highlighted the high level of prevention measures the government has implemented throughout the country, in the cities, shops, public and private spaces, public transportation, at the airports, that includes strict controls through tests, in every corner of the country. This is a big contrast with what she experienced coming back to the US through Miami where almost no strict controls were implemented for the thousands of travelers.

Steve Ellner is an Associate Managing Editor of the journal Latin American Perspectives and a retired professor of the University of the East in Venezuela. He is the author of Rethinking Venezuelan Politics; editor of Latin America’s Pink Tide: Breakthroughs and Shortcomings and Latin American Extractivism: Dependency; and editor of Resource Nationalism and Resistance. He has frequently published articles in NACLA: Report on the Americas, In These Times and Jacobin and has published on the op-ed page of the New York Times and Los Angeles Times. 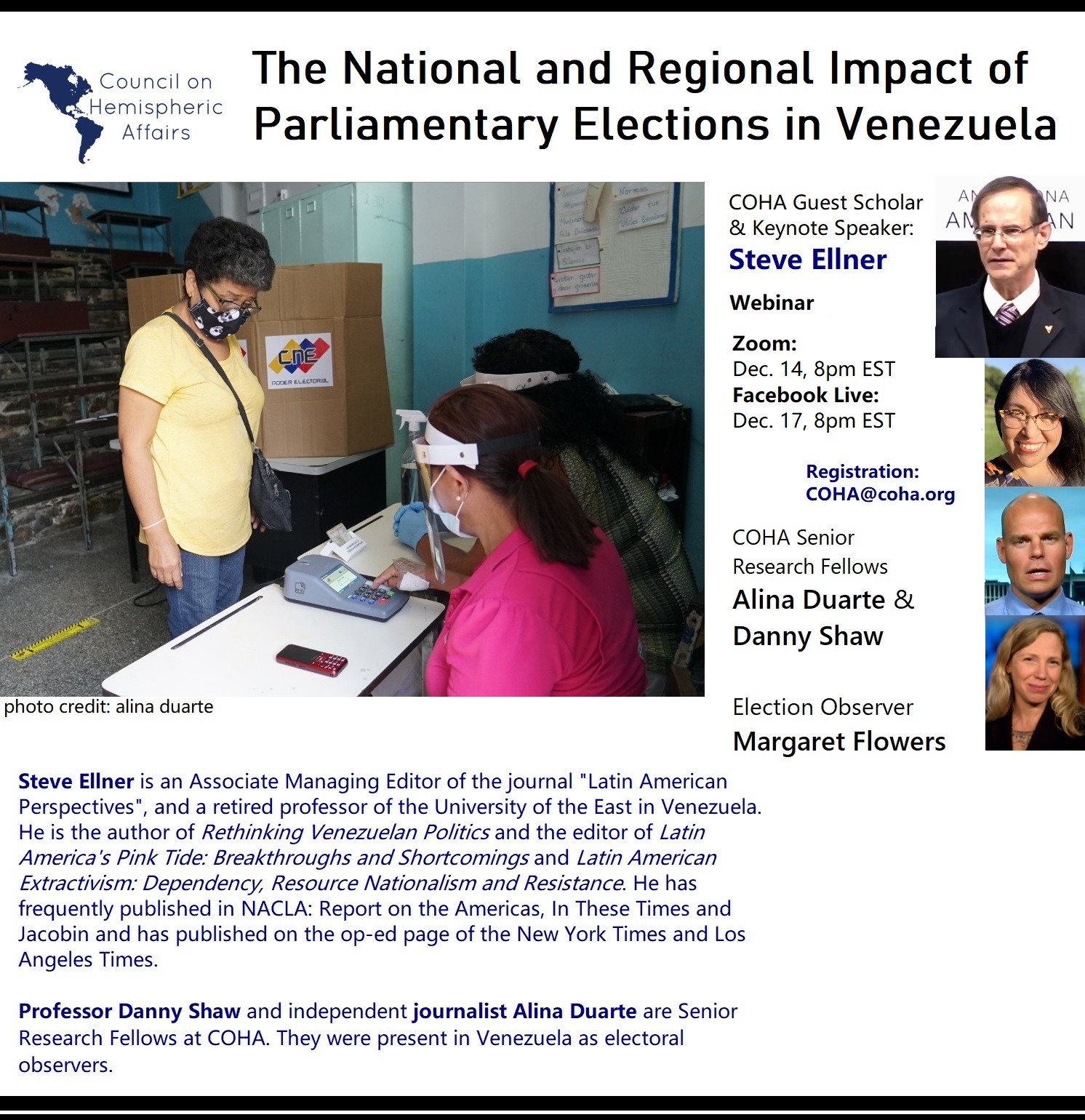