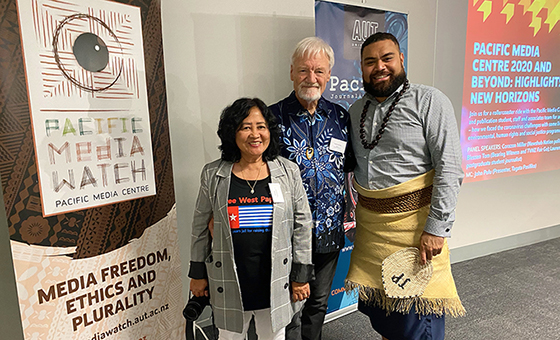 PACIFIC journalism and media researchers have gathered “live” in Auckland and “virtually” from Australia, Indonesia, and the region to showcase their projects and initiatives – and they spoke of the key challenges ahead.

Organisers also revealed that PMC founding director Professor David Robie was retiring from the role and stepping down as editor of Pacific Journalism Review research journal, which he started in Papua New Guinea, to concentrate on his own writing and creative projects.

The showcase, hosted by MC John Pulu of Tagata Pasifika, also launched the latest edition of PJR, which is themed on a range of climate crisis and pandemic papers.

The recent new fields of research (FoR) classifications adopted by the Australian and New Zealand Standard Research Classification (ANZSRC) were described by Sydney journalism professor and author Dr Chris Nash as “a huge victory”.

Speaking by video link, Dr Nash, a retired foundation journalism professor at Monash University and author of the ground-breaking book What is Journalism? The Art and Politics of a Rupture, told the symposium: “We have retained our positive in creative arts and there is a whole new field of journalism that fits within indigenous studies FoR codes”.

“This is a huge opportunity for journalism in universities in many ways,” he said.
While as a former journalist and documentary maker he had come to research through cultural studies, he had realised that “in the end it had become a bit of a strait jacket”.

However, it was not going to be easy “by a long shot” given the contest over positions, money and income that flowed from the large numbers of journalism students in universities.

Dr Nash said the opportunity was there for journalism to “branch out and be its own self”.

“It’s a fantastic achievement to take the journal to the position it is in now – two consecutive editions of over 300 pages is a massive, massive achievement.”

He said this gave the journal a firm foundation to go forward.

Stepping down as editor
Dr Robie is retiring from the PMC at the end of the year and associate editor Dr Philip Cass is taking over as editor of PJR, although he will retain an advisory role on the journal. Colleagues paid tribute to both his work and the contribution of Del Abcede to the university.

Pacific Media Centre advisory board chair Associate Professor Camille Nakhid and board member Khairiah Rahman praised his contribution to the media research and publication landscape and for building up the centre from scratch in 2007.

The announcement of his retirement had caught them by surprise and was “bittersweet as it celebrates and farewells our dear friend, colleague and mentor”, said Rahman.

Following news of Dr Robie’s retirement, tributes had “poured in from PMC’s immediate networks”, among them:

Dr Shailendra Singh, Senior Lecturer and coordinator of journalism at the University of the South Pacific, in Suva, Fiji: “Credits David for introducing him to academia 19 years ago along with his three colleagues, and the major impact that David has made through his mentorship in Pacific journalism.”

Nicole Gooch from the University of Technology in Sydney: “Describes David as ‘a giant of journalism and journalism education in the region’ for having built ‘a solid pathway for future journalists whilst leaving a huge, indelible mark on the journalism-social-political landscape through David’s astonishing work’.

Professor Wendy Bacon, an Australian academic, investigative journalist, and political activist: “She congratulates David and … Del, for her amazing contribution without which many projects would not have been possible.”

Deputy dean Professor Fiona Peterson launched the PJR by untying the edition ribbon and incoming editor Dr Philip Cass, who was born in Papua New Guinea and has contributed to the journal since the beginning, discussed the challenges ahead.

He has the support of Dr Robie and the other core editorial board members.

The industry panel featured journalists who had recently made the transition from media schools to journalism with successful careers and, in one case, a postgraduate student from a developing nation in crisis who carried the weight of expectations of his indigenous community.

Corazon Miller, a political reporter of Newshub Nation, spoke of her dual Filipino-New Zealand heritage and her change from a nursing career into journalism that took her to BBC World News and other opportunities; Blessen Tom, an Indian-New Zealand video producer talked of how his 2018 documentary work on a PMC Bearing Witness project prepared him for work with TVNZ Fair Go; and West Papuan postgraduate student Laurens Ikinia discussed the challenges he faced in a region facing repression and real dangers.

AUT documentary maker and lecturer Jim Marbrook and Fetaui Iosefo of Auckland University reflected on their collaboration over the 2020 NZ International Film Festival’s featured documentary Loimata: The Sweetest Tears and their “returning” narratives in their current projects.

Lecturer Dr Janet Tupou discussed her Tongan community work and affiliations and new strategies about diversity at AUT, including a “brown table” to encourage research collaboration.

Strong Asian connection
Khairiah Rahman spoke of the university’s collaboration with the Taipei-based Asian Congress for Media and Communication (ACMC) conference next year on November 25-27.

The conference had originally been scheduled for last month, but New Zealand’s covid-19 lockdowns and global uncertainties forced the postponement.

Rahman is also leading a seven-year collaboration with the Centre for Southeast Asian Social Studies at Gadjah Mada University (UGM) in Yogyakarta, Indonesia. AUT and UGM have published collaborative research on climate change and have a partnership between the two journals PJR and Ikat: The Indonesian Journal of Southeast Asian Studies.

A group of West Papuan students also participated in the symposium and staff, students and media people staged a separate Morning Star flag ceremony during the event.

Other tributes:
Kia ora rā kōrua and congratulations on the appointment Phil and David!

David, I know you’ve been concerned about succession planning for some time, and I hope this is the first step in cementing the Pacific Media Centre’s future.

You have made an extraordinary contribution to journalism research and advocacy in the region, and I look forward to seeing how it blooms and grows over coming years.

Phil, you’ve been doing wonderful work as Associate Editor – let us know if JERAA can help in any way during the transition.

I know some of you who work closely with David Robie will realise this, but for those who might have missed it, David is handing over the editorship of PJR to Phil Cass, a wonderful scholar whom I’ve known since his days in Central Queensland.

But I didn’t want to let the moment pass without paying tribute to David Robie, and his scholarly leadership in the Pacific over many decades.

David has made an extraordinary contribution to the quality of journalism, and journalism scholarship in his time in NZ, Fiji and PNG. Long before I knew him in person I admired his work (he was on the Rainbow Warrior, spent time in South Africa [and France], before settling back in NZ).

Whenever I think of David, I think of a warrior for press freedom, and as a fighter for all the issues we should be concerned about as journalists and journalism educators. I hope his legacy long continues in PJR.

I know he and Del will continue to be part of our scholarly community, but I thought it was important to at this point to note his great work, thus far.

PS – The new edition is out – have a read, it’s filled with wonderful articles, yet again.

You may have heard Professor David Robie is stepping down as editor of Pacific Journalism Review.

I’d like to congratulate David and acknowledge his extrordinary work in the academic publishing field over 26 years, and the countless opportunities he helped create for other researchers, including JEANZ members, to make a visible impact.

Indeed, many Aotearoa New Zealand researchers found their publishing feet because PJR was dedicated to the region and interested in their work.

Long may that continue. So, thank you David and team for so many countless hours and so much resilient spirit over many years and many issues.

And congrats and all the best to Philip Cass, the new editor of PJR (which will take a sabbatical next year).

COVID-19: Northland case is a reminder NZ’s ‘dumb good luck’ may run out