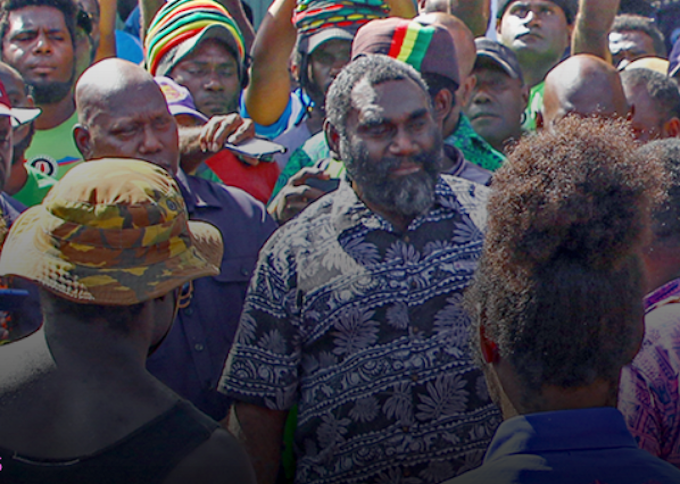 By Romulus Masiu in Port Moresby

Full independence will be top of the agenda pledges Ishmael Toroama, the newly elected president for the Autonomous Region of Bougainville.

Straight after his declaration yesterday at Hutjena in Bougainville, President-elect Toroama, a former rebel commander during the Bougainville civil war of the late 1980s, said he was looking forward to consulting with the PNG government to drive home the will of Bougainvilleans for independence.

But immediately after the return of writs for all seats, he said he would roll out a 100-day plan following the forming of his cabinet.

“After the return of the writs, I will then see and fully understand who the people have voted in and start allocating ministries,” he said.

“This goes to the members who have retained their seats. I will screen and check them out whether they have participated well in their previous ministries or not in order to give them ministries.”

President-elect Toroama also highlighted that he would like to rearrange the public service within the first 100 days to put in place strategies to help the people of Bougainville.

He said this election, which had been held just after the independence referendum, was about the same issue – independence – which he said had been going on for quite a while now.

He said he was sizing up and looking at his government to play that vital role in embracing the people’s will to talk about independence.

“It gives us a good opportunity to select those who have voted us into Parliament so that we can pursue and strengthen the development happening in Bougainville through consultation.”

Toroama has also extended an “olive oil branch” to rival candidates if they wanted to work with him to create a peaceful Bougainville.

“They are most welcome,” he said. “They are leaders on their own rights and it is something for us to sit down and discuss and see what we can come up with and fit those people who’ve run the race with me.”

‘Corruption-free’ administration
The National’s Miriam Zarriga reports that President-elect Ishmael Toroama is expected to be sworn in tomorrow in Buka before he forms a caretaker government and sets in motion his plans for a “corruption-free” administration.

The 51-year-old former Bougainville Revolutionary Army commander was declared the winner on 51,317 votes after the 23rd elimination on Tuesday night, beating former Central Bougainville MP Simon Dumarinu who had 33,088 votes.

“I am honoured to get this seat. I salute our good Lord for making things happen,” he told The National from Buka yesterday.

“It is my great honour to serve my people of Bougainville,”

The writs of the 2020 Bougainville election are expected to be returned to the Speaker Simon Pentanu in the House of Representatives today, marking the end of the election, and the end of the previous administration.

Toroama will then pick a male and a female elected member to be part of his caretaker government.

They will be sworn in by Justice Sir Kina Bona, the resident judge in Buka tomorrow.

Victory dedicated to Francis Ona
In an early interview with the PNG Post-Courier yesterday morning, Toroama battled tears as he remembered the late Francis Ona and Joseph Kabui’s dream for Bougainville as he was preparing to be declared president-elect.

President Toroama, in the company of his three children, said he would honour the late Ona’s dream which he held on to – and this was independence and restricting the use of alcohol.

Toroama said as he was closely associated with Ona and two things he always talked about were alcohol and independence.

“One of the two things the late Francis Ona always talked about with me and my team was alcohol drinking,” he said.

“It was something I said [that I would] do if I take the seat and that would be to make sure that alcohol will be served only in hotels, that’s one thing mi laik mekim long behalf blong em taim mi kisim seat.

“I will use my powers to stop this! And the other one [Ona talked about] is independence. I want to say that we are still struggling along the way but every struggle we make, there is a victory, every fight that we fight there is always a victory, without a fight, there is no victory!

“So I must say, what we struggled for, there is hope for achievement now, and this will be high on agenda when we start consulting with the national government forward.”

Toroama paid tribute to the late reclusive leader Francis Ona and said he could now implement Ona’s dream which was independence for Bougainville.

He also paid tribute to the late Joseph Kabui, whom he also served.

Congratulations from Marape
The Post-Courier reports that Prime Minister James Marape had congratulated Ishmael Toroama on his success.

“Congratulations of the highest order to Ishmael Toroama. Your win was conclusive and I offer my support to work with you to deliver on my commitments to Bougainville,” Marape said.

“Let me appreciate also the hard efforts of outgoing President Dr John Momis for his undying and untiring efforts for people empowerment both in Bougainville and greater PNG. Your legacies and ideologies will live on.”

This composite article is drawn from reports from The National and PNG Post-Courier with permission.

For French Muslims, every terror attack brings questions about their loyalty to the republic

Labor politicians need not fear: Queenslanders are no more attached to coal than the rest of Australia

For French Muslims, every terror attack brings questions about their loyalty...

Labor politicians need not fear: Queenslanders are no more attached to...

The bushfire royal commission has made a clarion call for change....