News that Zhenhua Data, an arm of China Zhenhua Electronics Group, a subsidiary of the military-connected China Electronic Information Industry Group (CETC), maintains a list of 800 New Zealanders on a “Overseas Key Information Database” that contains personal information on more than 2.4 million foreign individuals, has caused some consternation in Kiwi political circles.

The list of New Zealanders includes diplomats, politicians, community leaders, senior civil servants, defense and military officials, criminals, corporate figures, judges, B-list celebrities and Max Key. Complete with photos, information on these people is gleaned from public sources, particularly social media accounts, in what is one type of open-source intelligence gathering. Involving twenty “collection sites” around the world (including the US, UK and Australia) the larger global canvass is a broad first cut that extends to family members of prominent figures, upon which subsequent analysis can be conducted in order to whittle down to particular persons of interest in search of vulnerabilities, pressure points, sources of leverage, influence or opportunity across a range of endeavour.

However, there is a context to these efforts because Zhenhua Data is not the first company to compile records on “high value” foreign individuals nor is the People’s Republic of China the first or only State to (directly or indirectly) engage in this type of data collection.

Less than a decade ago, Edward Snowden revealed that US intelligence agencies and their Five Eyes counterparts shared information stored in a vast digital data bank obtained by bulk collection of personal data from US and foreign individuals and groups. Information for actionable intelligence “nuggets” was extracted via data-mining using computer algorithms and, increasingly, Artificial Intelligence (AI) technologies. Although the bulk collection program was later found to be illegal under US law, the practice of data-mining has continued in private and public sectors around the globe. Anyone who uses social media has their personal information stored and analysed by the providers of such platforms, who then sell that data to other firms. For profit-oriented actors, the objective is to tailor product advertising based on consumer preferences and characteristics. For governments the objectives can be security-related or oriented towards more effective public good provision, such as for public health campaigns. The overall intent is to get an actionable read on the subjects of scrutiny.

Added to this is the fact that intelligence agencies have long used network analysis as an intelligence tool, most recently in the fight against violent extremism. The larger purpose of network analysis is to connect dots on a large scale by establishing overt and covert linkages between disparate entities, both individual and collective. There are variations to network analyses, including what are known as “mosaic” and “spiderweb” tracing processes. Uncovering linkages helps futures forecasting because it can identify patterns of connection and behaviour, including funding sources, favours owed, personal ties, foibles and affectations. More recently, bulk collection, data-mining and network analysis have been wedded to facial recognition technologies that provide real-time physical imagery to records compilation efforts. This includes images of people in groups or in public spaces, which can be frame-by-frame analysed in order to help discern hidden or covert interactions between members of suspected networks as well as specific individuals.

None of this is particularly new or particular to the PRC. In fact, it is a routine task for intelligence agencies that is used as a first cut for more targeted scrutiny. Along with the Five Eyes partners, Israel and Russia have been pioneers in this field.

When taken together, open source data-mining coupled with social network analysis using a combination of advanced computer technologies creates a chaff/wheat separation process that allows further specific targeting of individuals for purposes important to the State doing the undertaking. In the case of Zhenhua Data, the list of targets includes those designated as “politically exposed persons” and “special interest persons.” Beyond general knowledge of “high value” individuals, the presumable objective of the exercise is to identify and locate hidden connections and personal/group vulnerabilities that can be leveraged for the benefit of the Chinese State. The application of specific designators provides an early filter in the process, from which more focused signals and human intelligence efforts can be subsequently directed.

Zhenhua Data is not alone in using its private business status as a front for or complement to State intelligence-gathering operations. The US firm Palantir, co-founded by New Zealand citizen Peter Thiel with seed money provided by the CIA venture capital arm In-Q-Tel, specialises in big data analysis, including software-based analytic synergies involving data mining, AI and facial recognition technologies. Palantir has an office near Pipitea House, Headquarters of the GCSB and SIS, and its local clients exclusively reside within the New Zealand Intelligence Community (NZIC).

The question, therefore, is whether Zhenhua Data is doing anything different or more insidious than what Palantir does on a regular basis? The answer lies in ideology, geopolitics, values and alliances. In New Zealand Palantir works for the Five Eyes network and local intelligence and security agencies. Its relationship with the spies is hand-in-glove, so it has a Western code of business conduct when dealing with confidential and private information and operates within the legal frameworks governing intelligence-gathering activities in Western democracies. Its orientation is Western-centric, meaning that its geopolitical outlook is driven by the strategic concerns and threat assessments of Western government clients. Although it may have a relationship with the New Zealand Police, it presumably is not involved in bulk-scale intelligence-gathering in New Zealand and what foreign data-mining and network analysis it does should serve the purposes of the New Zealand government. But the fact that Palantir and Five Eyes as a whole engage in mass data-mining and social network analysis is incontrovertible. 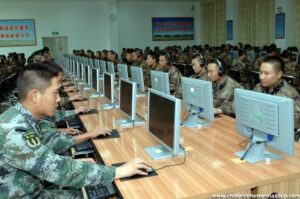 Zhenhua Data, in contrast, is believed to be a military-directed technology front. It is seen by Western intelligence agencies as an integral component of Chinese “sharp power” projection whereby so-called “influence operations” are directed at the elites and broader society in targeted countries with the purpose of bending their political, economic and social systems in ways favorable to Chinese interests. For the New Zealand security community, which as part of Western-oriented security networks has identified the PRC as a non-friendly actor in Defense White Papers and Intelligence Annual Reports, Zhenhua Data is not a benign entity and its intent is not good. Numerous academic and political commentators concur with this assessment.

The issue seems to boil down to whether data-collection activities are seen as good or bad depending on who does it, under what circumstances, and where one’s loyalties lie.

In other words, how one sees Zhenhua Data’s data-gathering efforts depends on how one feels about the PRC, the Chinese Communist Party (CCP), authoritarian rule and China’s move towards achieving Great Power status in world affairs. If one views authoritarians, the PRC, CCP or Chinese foreign policy with suspicion, then the view will be negative. If one perceives them with favour, then the perspective will be positive. Conversely, if one views the activities of the Five Eyes network and partners like Palantir with suspicion, then Zhenhua Data’s list is of little consequence other than as a non-Western equivalent to Palantir and an indicator of possible things to come.

Ultimately that is a matter of values projected onto real world practices. Stripped of the value assessment, Zhenhua Data is doing what it has to do in order for the PRC to achieve its long-term strategic goals.

This essay was originally published in The Spinoff, September 16,2020.

Is news worth a lot or a little? Google and Facebook want to have it both ways

It gets better with age: a brie(f) history of cheese in Australia

As heatwaves become more extreme, which jobs are riskiest?