ANALYSIS: By Denis Muller of the University of Melbourne

When a newspaper with the authority of The New York Times chooses to publish a party-political essay calculated to further inflame the violence wracking cities across America, serious questions arise.

On June 3 the Times published in its opinion section an essay by a Republican senator from Arkansas, Tom Cotton, headlined “Send in the troops”.

It argued the case, plentifully coloured by party-political asides, in support of US President Donald Trump’s threat to mobilise the US military against the protests triggered by the police killing of George Floyd.

READ MORE: When Trump attacks the press, he attacks the American people and their Constitution

The newspaper’s decision provoked a stream of protests on social media, including from several journalists on its own staff. Some simply stated that they disagreed with Cotton. But for others, their objections ran far deeper.

Many expressed concern that it endangered the safety of Times journalists, in particular those who are black. In circumstances where the police are already turning their violence on journalists covering the protests, this is a well-founded objection.

Nikole Hannah-Jones, a correspondent for The New York Times Magazine who won the Pulitzer Prize for commentary last month, tweeted: 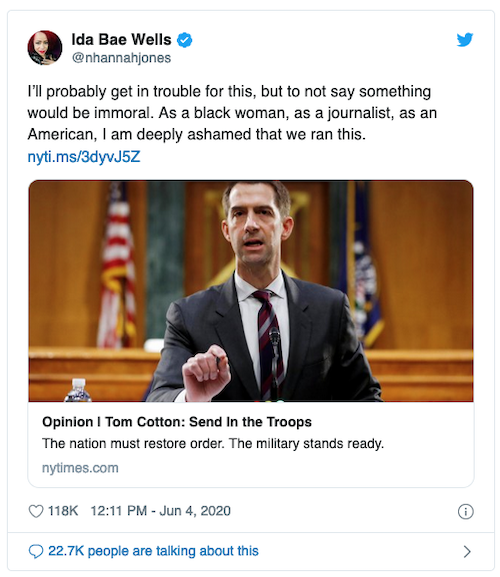 The NewsGuild of New York, the union that represents many Times journalists, said in a statement:

This is a particularly vulnerable moment in American history. Cotton’s Op-Ed pours gasoline on the fire. Media organiSations have a responsibility to hold power to account, not amplify voices of power without context and caution.

No coherent Times explanation
In the face of these cogent criticisms, it might have been expected The Times would publish a coherent and substantial account of its reasons for running the Cotton essay. It has not. It has left it to the editorial page editor, James Bennet, to respond, and he has contented himself with a Twitter thread.

His reasoning, if it can be dignified with the term, can be summarised in these statements from that thread:

Times Opinion owes it to our readers to show them counter-arguments, particularly those made by people in a position to set policy.

We understand that many readers find Senator Cotton’s argument painful, even dangerous. We believe that is one reason it requires public scrutiny and debate.

These reasons can be swiftly disposed of before moving on to questions he did not bother to mention.

Counter-arguments: by all means, but why from a party-political source at this time in American history, when party-political polarisation is as deep as at any time in the post-civil war era? Why not invite a non-party source, perhaps an expert in national security, to make the case for military intervention?

From a person in a position to set policy: just about the strongest reason not to run such a piece. It aligns the paper closely with those in power, an abrogation of the paper’s independence from government.

Scrutiny and debate: government is better scrutinised at arm’s length, and the public debate that has ensued is not about the merits of military intervention, but about the inflammatory content of the essay and the Times’s decision to run it.

Was the essay offered?
Now for the questions Bennet did not mention.

Did the Times solicit the essay from Cotton or did he offer it?

To what extent, if at all, did the Times consider the likely foreseeable consequences of running such a clearly partisan essay on so volatile an issue?

What consequences did it anticipate?

How did it balance the obvious risks of aggravating an already violent situation against the public-interest grounds Bennet has advanced?

Did it ask itself why a senator, with the powerful platform of the US Senate at his disposal, would seek to harness the authority of The New York Times to his cause?

Did it perceive that in lending its authority to this essay, it would be handing a valuable propaganda tool to the White House?

In the three-and-a-half tumultuous years of the Trump presidency, America’s serious national newspapers – The Times, The Washington Post, the Los Angeles Times – have been a remarkable bulwark in defence of American democracy.

Along with the judiciary, they have discharged their institutional responsibilities fearlessly. They have kept an unflinching gaze on the Trump presidency and faced down his intimidatory tactics.

With Congress paralysed by partisan divisions, it is these two institutions that have made America’s democratic arrangements work.

Yet the strains are beginning to show.

The Washington Post reported this week, in the context of police attacks on the media covering the riots, that “the norms have broken down”.

In these circumstances, the decision by The Times to publish the Cotton essay is worse than just a bad editorial call.

At a critical juncture in this crisis, it suggests a failure of nerve.

By Dr Denis Muller, senior research fellow of the Centre for Advancing Journalism, University of Melbourne.This article is republished from The Conversation under a Creative Commons licence. Read the original article.