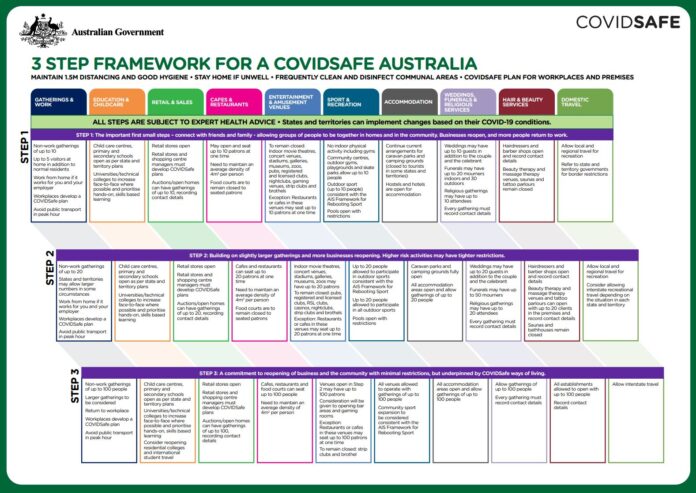 Nothing our leaders can do now will return the economy to where it was before COVID-19. For one thing, international travel is likely to remain closed for a long time.

But there are things they can do, and on Friday the prime minister outlined a roadmap.

Of interest to us is whether it makes sense to reopen bars and restaurants.

The Australian Government committed A$320 billion over six months to support businesses and workers whose incomes has been hit by the COVID-19 pandemic.

That amounts to $12 billion per week.

Reported job losses suggest around 29% is being paid out to support the accommodation and food services industry.

That can be thought of as one of the costs of keeping bars and restaurants closed.

What about the benefits? What costs do we avoid by keeping bars and restaurants closed?

It helps to illustrate our thinking as a decision tree.

The upper branches of the tree represent the decision about whether or not to lift restrictions.

If restrictions are lifted, there may, or may not, be a new outbreak that requires the reintroduction of restrictions.

While we don’t know the likelihood of a new outbreak, we can test different assumptions.

Read more: The calculus of death shows the COVID lock-down is clearly worth the cost

Given the very low number of new cases of COVID-19, the assumption we have tested is that there would be a one in ten chance of a new outbreak requiring the reintroduction of restrictions.

It’s a matter of probabilities

If the outbreak was controlled by reimposing restrictions (the 95% probability) we assume an extra 40 COVID-19 deaths and an extra four weeks of restrictions at a financial cost to the government of $6.8 billion.

If the outbreak was more severe and a broader set of restrictions are required (the 5% case) we assume an additional 200 deaths and extra cost to the government of $17 billion.

(We also assume that 25% of the government spending to support the hospitality industry would remain because a decision to reopen bars and restaurants would not result in the industry returning to it’s pre-COVID-19 state – many people would remain cautious about the risks of contracting COVID-19 or have become conditioned to less frequent socialising.)

When we weigh these costs by their probabilities we get expected costs to the government from reopening of $1.1 billion, compared to costs from keeping bars and restaurants closed for another week of $1.7 billion.

Is the $600 million per week value for money?

It suggests the government would be $600 million per week better off it it reopens bars and restaurants.

We would expect a number of extra COVID-19 deaths. Multiplying the probabilities of the extra deaths under each scenario by the likelihood of each scenario suggests there would be an extra 4.8 deaths if bars and restaurants are reopened this week.

Because the average age of people dying due to COVID-19 is around 80 years, and each might have around ten more years to live, the number of life years per week that would be lost as a result of the $600 million per week the government saved would be 48.

Read more: New cancer drugs are very expensive – here’s how we work out value for our money

It suggests each life year saved as a result of keeping bars and restaurants closed costs around $12.5 million.

Decisions on whether government should fund health interventions are commonly based on an assessment of whether the health gains justify the additional costs.

As a ballpark figure, new measures are funded if they are shown to gain an additional life year at a cost of around $50,000.

This suggests that by keeping bars and restaurants closed the government is paying 250 times more than it would usually pay to gain a life year.

It is funding that doesn’t pass the usual test

A separate guideline used by Australian governments to assess regulations and infrastructure projects puts the value of a statistical life year at $200,389 in today’s dollars.

This suggests that by keeping bars and restaurants closed the government is paying 60 times more than it would usually pay to save a life.

It’s why we think governments should reopen them, next week.

Like all such analyses, ours depends on the assumptions used.

We have put a spreadsheet of our decision tree online to allow readers to experiment with different ones.

It gives us an indication of how many life years the government is saving for the $600 million per week it is costing it to keep bars and restaurants closed.

It suggests the government could save many more life years by spending the money in a different way.

– ref. Should we re-open pubs next week? The benefits seem to exceed the costs – https://theconversation.com/should-we-re-open-pubs-next-week-the-benefits-seem-to-exceed-the-costs-137609