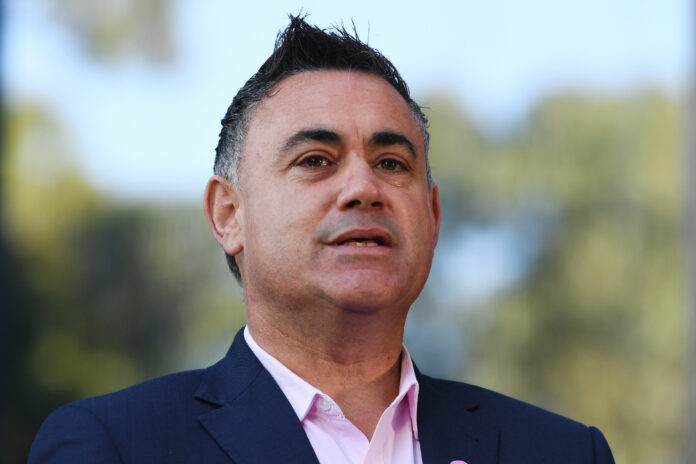 In a message to McCormack, a furious Barilaro said, “You will never be acknowledged by me as our leader. You aren’t. You never will be”. He accused McCormack of feeling threatened by his (short-lived) bid to switch to federal politics.

After giving every indication last week he wanted to contest the byelection Barilaro on Monday announced he would not be seeking nomination.

This followed his failure to get the Liberals to make way, allowing him to be the only Coalition candidate. But he is also blaming McCormack for undermining him.

McCormack was known to be unenthusiastic about the prospect – in the event of a win – of having the volatile Barilaro in his federal party. This would have put more pressure on McCormack’s leadership, which pre-COVID was under strain after a failed bid to overthrow him by Barnaby Joyce. Publicly McCormack, while careful with his words, noted that if Barilaro decided “to put his hand up, he’s got to go through the pre-selection process. That is always the case with every National Party member.”

On Tuesday NSW Liberal Transport minister, Andrew Constance, from the state seat of Bega, which takes in a substantial part of Eden-Monaro in the south, announced his bid and is set to be the party’s candidate, although the Liberals still have a preselection open.

Constance will come to the byelection with the memory of his prominent role during the bushfires still fresh in the voters’ minds. At that time, he was sharply critical of Scott Morrison’s performance. But Morrison will be now be happy to have him as Liberal candidate, giving his local popularity.

In his vitriolic message, Barilaro said: “Michael. Please do not contact me. Your lack of public enthusiasm or support for my candidacy went a long way to my final decision.

“Don’t hide behind the ‘members will choose the candidate’ rubbish, as you were the only one saying such lines. Don’t you think my branches would have backed me in?

“To feel threatened by me clearly shows you have failed your team and failed as a leader.

“You will never be acknowledged by me as our leader. You aren’t. You never will be.

“The Nats had a chance to create history, to change momentum, and you had a candidate that was prepared to risk everything to make it happen.

“What did you risk? Nothing.

“Hope you are proud of yourself.”

In his Monday announcement Barilaro said: “The polling showed I could win but sometimes in this game, you let ego get in the way of good decisions and I’ve got to make the best decision for me, my family, for the people of NSW – more importantly for the people of Eden-Monaro”.

The Liberals argued Constance would have a better chance of taking the Labor seat than Balilaro, despite the fact the regional centre of Queanbeyan is in his state seat of Monaro, and he won every booth in his electorate at the NSW election last year.

Eden-Monaro became vacant because of the resignation of Labor’s Mike Kelly due to ill health. Labor has chosen Bega mayor Kristy McBain, who is considered a strong candidate.

The contest is seen as an important test for opposition leader Anthony Albanese.

Labor has history on its side – it is a century since a federal government took an opposition seat at a byelection.

In response to Barilaro’s attack McCormack said he respected his “personal decision not to contest the Eden-Monaro by-election due to family reasons.

“I have always supported the democratic election processes of the National Party of Australia. I wholeheartedly endorse the right of branches to select their local candidates first and foremost.

“My support of Mr Barilaro has been long standing and I respect his position as Deputy Premier and New South Wales Nationals’ Leader.”