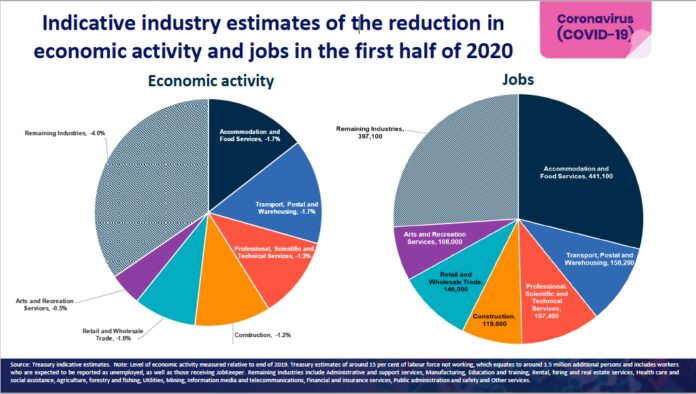 With the COVID case curve currently close to the floor, Scott Morrison on Tuesday declared attention had to be directed firmly onto another curve.

“Thousands of Australian lives have been saved, when you look at the experience of how coronavirus has affected so many countries around the world,” he said in his update following national cabinet’s meeting.

“But we now need to get a million Australians back to work. That is the curve we need to address.”

There are multiple problems in – to use Industrial Relations Minister Christian Porter’s term – “re-animating” the squashed economy and its individual businesses.

And there is also a potential danger in the process.

The government and health officials are being frank in admitting they expect the number of COVID cases will rise as things re-open.

“When we move and start to ease some of these restrictions, of course you will see numbers increase in some areas, you will see outbreaks occur in other places, that is to be expected,” Morrison said.

“What matters is how you deal with it, and how you respond to it,” he said.

Cases could be managed in a strong health system.

In response to a question about schools, Morrison said: “So rather than be focused on how many more cases there would be, what we’re focused on is making sure we have the capacity to deal with the cases.”

At the early stage of the pandemic, even when case numbers were low, the government’s great fear was it did not have the health infrastructure in place to cope with an escalation.

Weeks of frantic activity buttressed these resources, physical and human, including with the much-discussed app (that still needs many more than the present about five million downloads).

But while the government acknowledges we’ll likely see COVID cases creep up again, it will put no figures on this.

Asked what the health advice was on numbers, Morrison said, “Nothing at this point because it all is a function of what restrictions [are lifted] and how quickly.”

In terms of the virus, we’re headed into a new chapter of uncertainty, though this time with our defences stronger and extra knowledge about the enemy.

The government likes to talk about crossing a bridge to the other side of the COVID crisis. Ahead is a narrow part of the bridge, where missteps or ill-judged acceleration of the journey out, could result in a fall into dark waters.

Hence the work (presented to the national cabinet meeting) being done with business to make workplaces fit for purpose, and to enable outbreaks to be dealt with quickly and properly.

The disaster would be for the virus to take off, leading to the re-imposition of restrictions that had been removed.

As they talk up the imperative of the other curve, both Morrison and Treasurer Josh Frydenberg are ramming home the message about the damage to the economy of prolonged restrictions.

Both made the point on Tuesday that for every extra week the restrictions remained, there would be about $4 billion reduction in economic activity.

National cabinet agreed to have a three-stage framework – with detail on Friday – “to gradually remove baseline restrictions” so Australians could “live in a COVID-19 safe economy”.

Note that is a “COVID safe” economy, not a “COVID free” one (unlike New Zealand’s ambition). As Morrison said, “We aren’t pursuing an eradication strategy”. The virus will still be lurking.

National cabinet aims for this “sustainable COVID-19 safe economy” to be reached in July.

But everyone won’t be marching at the same pace.

Individual states and territories will decide their timeframes for moving between steps and removing particular restrictions.

This reflects that different parts of the country are at different stages, and some leaders are more cautious.

Asked whether there was anything he could do to pressure some states to move faster, Morrison had two messages: that federal government authority was limited, and that state and territory leaders would be accountable to their own constituents for the decisions they take.

Indeed, it’s been very obvious these leaders are acutely aware of their responsibility and answerability, a factor in the stances of some on the vexed issue of schools, in defiance of Morrison’s arm twisting.

“We’re a federation and at the end of the day, states have sovereignty over decisions that fall specifically within their domain,” Morrison said.

“Every premier, every chief minister has to stand in front of their state and justify the decisions that they’re taking in terms of the extent of the restrictions that are in place. The trade off that they’re making between people having jobs and the impact on the containment of the coronavirus.

“Now, my view has always been this … Just having a low number of cases is not success. Particularly when you got a lot of people out of work … That is the curve that I’m looking to address,” he said.

“We’ve had great success on flattening the health curve, and that’s great and we all wanted that. But it has come at a price and we now have to start balancing that up.”

On and after Friday, following the next national cabinet meeting, we’ll see how that balancing act is going to play out.

– ref. View from The Hill: Juggling the curves as we ease the COVID restrictions – https://theconversation.com/view-from-the-hill-juggling-the-curves-as-we-ease-the-covid-restrictions-137940