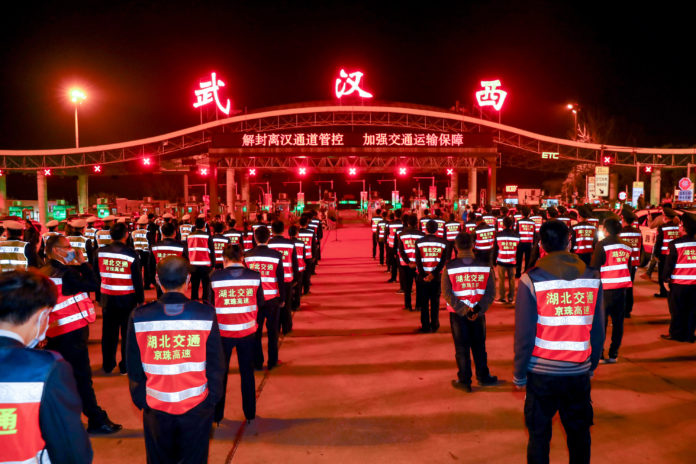 Australian Foreign Minister Marise Payne has led a bipartisan call for a global inquiry into the origins of the coronavirus, noting Australia will insist on an independent review, not one conducted by the World Health Organisation.

Labor’s shadow health minister, Chris Bowen, has given his full backing to the idea, saying

we would expect and trust that China would cooperate.

Payne and Bowen are likely to be disappointed.

In our most recent episode of The Little Red Podcast, former China correspondent Louisa Lim and I sat down with Joseph Nye, the man who coined the phrase “soft power”, Professor Bates Gill from Macquarie University and Natasha Kassam of the Lowy Institute.

Their views of the possibility of China — and the US — displaying moral leadership during this crisis are bleak.

In Nye’s blunt assessment, both countries are only interested in tactical leadership on global issues like COVID-19 and climate change. Both China and the US seem focused on wielding power, rather than achieving joint goals by exercising power with other nations.

Both the Chinese leadership and the American leadership are focused almost entirely on competitive power over who came out ahead [after COVID-19] and how well we dealt with it.

China has settled on its own telling of the story

The main barrier to Payne’s call for an inquiry is China has already settled on a narrative that the origins of the virus are unclear – Italy and the United States have been named as possible sources – and that if it did arise in China, it was not the result of a laboratory accident.

Researchers in China looking to publish anything related to the origins of the virus also now face an extra level of scrutiny.

As a result, the Chinese Communist Party (CCP) will have no interest in cooperating with any effort that might challenge that narrative.

dancing to the tune of a certain country to hype up the situation.

In disputes such as these, Australia is seen as a proxy for the United States, and by extension the colonial powers behind China’s “century of humiliation”, the term used to describe the period of foreign subjugation from the mid-19th century to the Communist Revolution after the second world war.

Overturning humiliation by foreign powers is the basis for President Xi Jinping’s project of national rejuvenation. Allowing a team of foreign investigators into China to ask awkward questions about biosecurity is never going to be on the agenda.

There was a brief period in February when China looked open to entertaining a different narrative around the origin of the virus. But that window quickly closed when the US media began to run stories questioning whether it was accidentally spread from one of two institutions in Wuhan studying bat coronaviruses.

Here’s the rub: both China and the US are playing to domestic audiences.

In the case of China, that audience is not even the Chinese public, writ large. As Bates Gill argues,

the primary target of what we’re seeing in all the so-called soft power is the party itself. It is an attempt to remind party members, reassure them about Xi Jinping’s leadership and first and foremost, feel good about themselves.

While there is mixed evidence to support the lab accident theory, as soon as the story is taken up by outlets such as Fox News, the matter enters the realm of information warfare, which both the US and Chinese governments have turned to in this crisis.

US Secretary of State Mike Pompeo has called on China to “come clean” on what it knows, echoing language frequently used by President Donald Trump. A recent Pew Poll found nearly 30% of the US population subscribes to the theory the virus is a Chinese “bioweapon”.

Read more: How vulnerable is Xi Jinping over coronavirus? In today’s China, there are few to hold him to account

Meanwhile, China has ramped up its own disinformation about the virus originating in the US.

The number of Twitter accounts opened by Chinese embassies, consulates and ambassadors has increased by more than 250% since March 2019. These diplomats are now being described as “wolf warriors” in China for their newly aggressive stance on social media toward western countries.

As Natasha Kassam observes in our podcast,

Conspiracy theories have been floated and then taken away, just trying to muddy the waters rather than actually change someone’s mind. This is reminiscent of Russian disinformation efforts.

‘Soft power is in the eye of the beholder’

In some countries, China’s “face mask diplomacy” – its recent move to provide protective equipment and respirators to all corners of the globe – will improve trust in the country as a global power.

As Kassam notes, the Chinese government is wise to where it gets a warm reception and where it does not:

China’s assistance is in stark contrast to the US ban on exports of personal protective equipment, as is their projection of competence in dealing with the virus.

But polling indicates that, as Nye puts it, “soft power is in the eye of the beholder”. Where China is not trusted, mistrust is likely to grow.

A recipe that can’t be altered

Herein lies the dilemma for Australia. Unless a broad coalition of countries from across the ideological spectrum back its call for an independent inquiry into the origins of the pandemic, it’s going nowhere.

Thanks to China’s all-court disinformation campaign abroad, including an effort to own and influence global media, paired with an ever-more tightly controlled media landscape inside China, the transparency Payne and Bowen call for is simply impossible.

Read more: The world has a hard time trusting China. But does it really care?

Under Xi’s predecessors, there was some room for divergent views, even from civil society. But under Xi, all information that meets Foreign Ministry spokesman Geng Shuang’s definition of “objective” and “scientific” is prepared in a centralised “kitchen”, as the Chinese media describes it.

The head chef has already decided on the dish. Regardless of how many deaths this virus will cause, alternative recipes from abroad are not welcome.

– ref. Murky origins: why China will never welcome a global inquiry into the source of COVID-19 – https://theconversation.com/murky-origins-why-china-will-never-welcome-a-global-inquiry-into-the-source-of-covid-19-136713