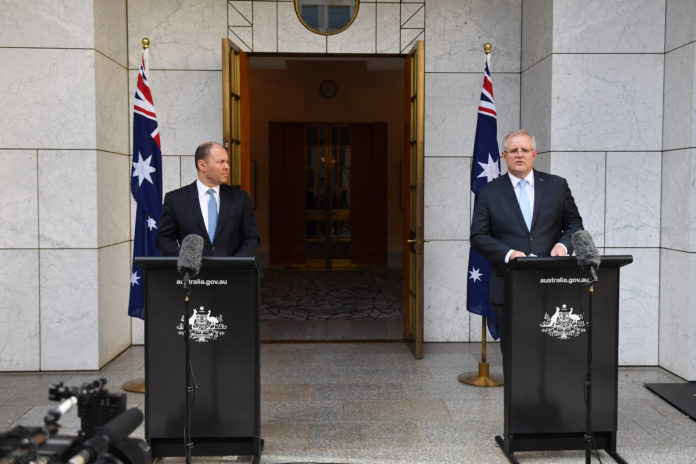 Two or three months back, Prime Minister Scott Morrison and Treasurer Josh Frydenberg were on the cusp of fixing that.

Now, the next surplus may be further off again.

Yet so deep are the ideological battlelines that some will never give credit to the pair for finding A$214 billion of new spending in the most dramatic political shape-shift in the federation’s history.

Some reticence is reasonable given that:

Announced in three eye-watering tranches as the scale of the coronavirus disaster revealed itself, the Coalition’s escalating response charts a stunning right-to-left expansion of government via colossal deficit spending freighted with intergenerational liability.

Read more: Has coronavirus killed ideology? No, it’s just cycled it around again

Until 2020, the Coalition’s somewhat niche lesson from the GFC was not a new appreciation of how Keynesian budget policy ameliorates economic pain, but rather a keener sense of what political advantage could be taken from the “fiscal hangover” from such anti-cyclical spending.

Grappling with the crisis, the Morrison government declared the usual ideology would be benched in order to protect the community, shield the economy and retain as much “snap-back” potential as possible following an enforced hibernation.

The biggest ticket spend is the A$130 billion (in just six months) JobKeeper package, which pays $1,500 a fortnight to employers to keep employees on the books. It follows a A$66 billion doubling of the Newstart pension (JobSeeker), and free childcare, among a suite of other measures.

Psychologically, it is not hard to see why entrenched Coalition critics would ask, “Where’s the catch?”

After all, how to make sense of such an about-face by a party that vilified Labor’s (smaller) GFC spending as excessive and the genesis of a “debt and deficit disaster”; lionised “lifters” over “leaners”; and most recently secured a third term on the prosaic pledge of delivering surplus budgets no matter what?

Of course, all this changed when the “what” turned out to be a global pandemic packing the harshest economic punch since the Great Depression.

Preening talk of large surpluses and even of economic growth disappeared. Australia’s enforced economic shutdown, its well-observed social distancing measures and a slice of good luck have combined to deliver remarkable progress against the disease threat. Even the suppression strategy now looks like eliminating the virus without the acute pain of eradication restrictions used in New Zealand.

But what about the economic tail?

And what if all of this non-ideological spending falls short anyway because at the margins, and for what appear to be ideological reasons, recovery is slowed down by deeper sectoral recession?

Aviation – the most visible and immediate casualty of the stay-home/don’t-travel imperative, stands out. The government has refused a A$1.4 billion loan to Virgin Australia on logic that appears partly ideological.

Telling Virgin’s international owners to look to their own “deep pockets”, Frydenberg explained on April 16 that more than A$1 billion had already been directed to the sector:

We want to see Virgin continue, we want to see two airlines in the domestic market, but we’re not in the business of owning an airline.

Yet even with that support, Virgin had grounded its fleet and stood down some 90% of its 10,000-strong direct workforce, while Qantas had done likewise with 20,000 of its 30,000 employees.

Now Virgin is in voluntary administration and several thousand livelihoods dangle over the precipice.

A game of ideological “chicken” is under way, with the Coalition betting that somebody else will step in to rescue the airline.

Several questions arise. Why let such a crucial sector crumble right now of all times? Why allow the shutdown to force a return to a monopoly? And, importantly, how would the collapse of such a large regionally significant employer, with all of its myriad interdependencies across the tourism and hospitality sectors, serve the ambition of a rapidly rebounding economy?

In 2009, the new Obama administration took equity stakes in automotive manufacturers to keep them afloat and was able to sell down those shares later when the car makers bounced back. Analysts argued that neither Chevrolet nor Chrysler were viable long term. They were wrong.

Beyond small government ideology, is that not a template for aviation now – especially if a monopoly is deemed unacceptable?

Another case is the JobSeeker payment. Generous though it is, this emergency assistance has eligibility limits. Those on work visas – who provide most of the regional seasonal workforce – are ineligible, and even Australian citizens employed on casual contracts of less than 12 months duration miss out. In some industries like education (university research assistants, casual school teachers, aged-care workers, entertainers), short-term contracts are the norm. Hundreds of thousands of workers – perhaps as many as a million – never receive contracts of greater than 12 months.

Again, given the importance of these workers in key sectors of the economy, the question arises as to why some jobs are worth protecting and others are not.

The ACTU warns that if Virgin falls over the Commonwealth could be up for hundreds of millions in workers’ payments from its “Fair Entitlements Fund”. And that’s before paying out unemployment benefits for some – particularly older workers – indefinitely.

If it would take three-and-a-half fire-tankers to save an apartment block that is on fire, and you stop at three to save water, haven’t you just wasted three tankers’ worth?

Morrison and Frydenberg have done extremely well in responding to this crisis. It would be a pity if, after all this spending, residual “old” thinking still left the recovery “a day late and a dollar short”.