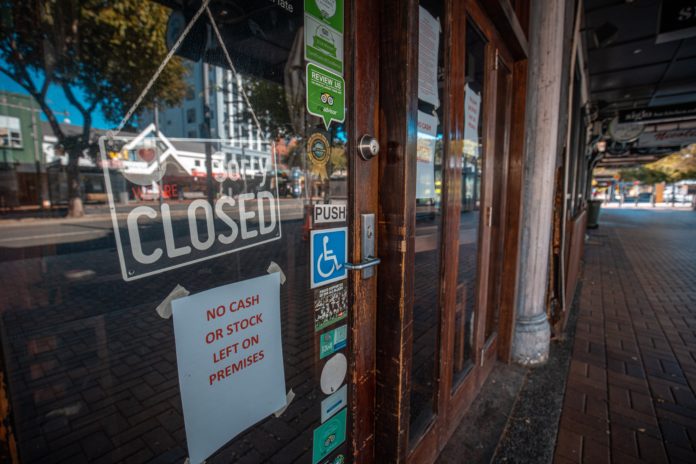 Source: The Conversation (Au and NZ) – By Martin Berka, Professor of Macroeconomics, Head of School of Economics and Finance, Massey University

New Zealand has the most stringent COVID-19 policy restrictions in the world, matched only by Israel and India, according to Oxford University’s coronavirus government response tracker.

The current level 4 restrictions have brought the number of cases down, and I am delighted the government acted quickly and strongly. But the newly announced level 3 conditions remain stringent, with ongoing border controls, limited domestic travel, and continued closures in many business sectors, including retail and hospitality.

On Monday, the government will announce whether New Zealand will remain in level 4 lockdown for longer, or move to level 3. The obvious trade-off lies between the loss of economic opportunities and the preservation of life.

Based on a combination of international and local data, I argue that New Zealand should go ahead and step back its restrictions from Thursday, because level 3 provides sufficient health outcomes without the worst economic impacts of level 4.

As the table below shows, New Zealand boasts the lowest mortality rate (0.1%, as of April 8) and ranks among the lowest on the number of confirmed cases per 100,000 people. New Zealand’s government can be proud of these health outcomes.

The links between the stringency index, the number of confirmed cases and case mortality, are complex. In the case of New Zealand, good health outcomes are largely the result of stringent policy. In Italy, the reverse is the case as policy stringency followed rapidly deteriorating health outcomes.

From an economic point of view, the key difference is that while many countries required workplaces to shut down, New Zealand went further; its closures during level 4 have extended to every non-essential business, leaving only supermarkets and pharmacies open.

This week, the New Zealand Treasury released a report with five different scenarios of economic impacts from COVID-19.

In one of the worst case scenarios, in which New Zealand stays at level 4 lockdown for six months, followed by another six months of level 3 restrictions, treasury forecast an unemployment rate of around 26% and a drop in GDP by 37%. This would be unprecedented in New Zealand history (the worst real annual GDP growth rate since 1860 was -7.07% in 1932, and the highest unemployment since 1970 at 11% in 1991). This scenario is very unlikely to happen, given no one in the government has been talking about staying at level 4 for that long.

In the most positive scenario, New Zealand would end its current level 4 lockdown after one month, followed by another month of level 3 and ten months at levels 2 and 1. In this case, treasury estimates GDP would drop by around 5% and unemployment would peak at around 8%, but only because of the government’s NZ$12 billion rescue package. This may seem more palatable, but is still far worse than the recession that followed the 2008 global financial crisis, when New Zealand’s GDP declined by 2.2% and unemployment peaked at 6.9%.

The government’s unprecedented fiscal response will protect employment, but it offers limited protection from a drop in GDP. This is because the government is effectively paying workers to not work. This protects incomes, but because most aren’t actually allowed to work, GDP drops more than employment.

Putting a value on lives lost

We rightfully feel repulsed by the notion of putting a price tag on life. But every government uses estimates of a “value of statistical life” in designing its health care policies and decisions about which life-saving drugs to fund.

There are hundreds of such estimates in the academic and policy literature. For example, the US Environmental Protection Agency uses a value estimate of around US$10 million per life, the Australian government indicates A$3.5 million, and the European Commission estimates €1-2 million.

If we assume value of statistical life of NZ$5 million (similar to the estimates in this report for the New Zealand Fire Service Commission), a back-of-the-envelope calculation suggests the policies in the tougher treasury scenario outlined above – of staying at level 4 lockdown for six months – would need to save at least 16,800 lives, statistically speaking, to have been worth it.

These unpalatable “trade-offs” are nevertheless what government officials consider when deciding when to open up the economy, aware that moving to level 3 will likely cost lives.

Having the most stringent policy stance has resulted in an enviable decline in new confirmed coronavirus cases in New Zealand and prevented overloading the healthcare system.

But treasury estimates that if level 4 were to continue for a year, GDP would drop by 15% compared to level 3. In nominal terms, this means around NZ$45.5 billion per year.

The drop in GDP may seem surprising as the differences between the two levels is minor. At level 3, borders remain tightly controlled, people have to keep working from home if possible, and only companies that can implement physical distancing measures are allowed to resume production. Hospitality, retail, tourism and entertainment sectors remain largely closed, except for digital transactions. But these and other services comprise most of the GDP in advanced economies.

This cost also ignores long-term effects of unemployment. Young people will likely be on permanently worse-off earnings paths if we head into a multi-year recession. Poor people will be harder hit because they lack an economic “cushion”.

The clearest path forward from next week

I think a strong economic and humane case can be made to relax the rules to level 3 at the end of the current four-week level 4 lockdown, starting from next Thursday.

International epidemiological policy models of COVID-19 predict that countries will go through cycles of easing and tightening restrictions.

It is practically impossible to eliminate COVID-19 in the short term without major social upheaval caused by an economic depression. Level 4 is no longer an optimal policy because it ignores the livelihoods of almost the entire New Zealand population. Nobody is suggesting to open up the economy completely, but I argue that level 3 restrictions are strict enough to protect lives, while also helping people recover their livelihoods.

New Zealand’s level 3 rules are more stringent than Singapore, Hong Kong or South Korea, and could still cause an unprecedented recession. New Zealand shouldn’t return to level 4 unless there’s a threat of our health system being overrun.

– ref. Protecting lives and livelihoods: the data on why New Zealand should relax its coronavirus lockdown from Thursday – https://theconversation.com/protecting-lives-and-livelihoods-the-data-on-why-new-zealand-should-relax-its-coronavirus-lockdown-from-thursday-136242