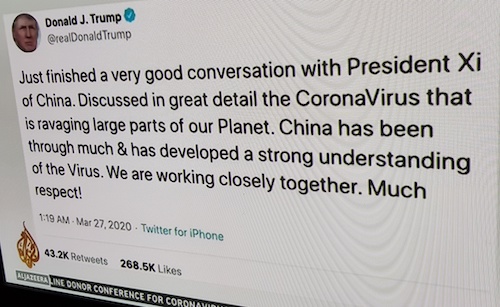 Donald Trump’s sabre-rattling freeze on funding for the World Health Organisation at a time when many countries are pulling together for a global response to the coronavirus pandemic has surely earned him the epithet of the “world’s chief covidiot”.

The US President’s efforts at deflecting the blame for his country’s national public health crisis by pointing the finger at WHO and announcing that Washington would pull funding as the largest donor has shocked the world, triggering widespread condemnation from leaders and public health experts.

The impact of this shock decision is bound to be felt in the Pacific region with some countries and territories clinging precariously to their Covid-19-free status, while others – such as the US territory Guam, New Caledonia and French Polynesia – have already become hotspots.

American funding to WHO provided more than 15 percent of the international body’s 2018-19 budget of $4.4 billion.

While Richard Horton, the editor-in-chief of the Lancet medical journal, denounced Trump’s decision as “a crime against humanity” and an “appalling betrayal” of every scientist, health worker and citizen – and of global solidarity, the second largest WHO donor, Microsoft’s Bill Gates of the Gates Foundation, described the move “as dangerous as it sounds”.

UN Secretary-General Antonio Guterres says it is “not the time” to cut funding or to question errors.

“Once we have finally turned the page on this epidemic, there must be a time to look back fully to understand how such a disease emerged and spread its devastation so quickly across the globe, and how all those involved reacted to the crisis,” he said.

Three-month review
Rather pointless right now when most countries are in crisis.

Trump ordered the blocking of funds pending a three-month review of WHO’s role in allegedly “severely mismanaging and covering up the spread of the coronavirus”.

The president claimed that the pandemic could have been contained “with very little death” if the UN agency had accurately assessed the situation in China, where the virus outbreak began in the city of Wuhan late last year. He accused of WHO of having put too much faith in Beijing.

However, the US president had in the early stages regularly downplayed the dangers of this virus that has killed more than 128,000 people and infected more than 2 million worldwide, according to figures from Johns Hopkins University.

He had declared it was all “under control” and as late as March 27 praised President Xi Jinping for China’s handling of the crisis. According to Politico, he tweeted or addressed rallies 15 times in praise of China.

The US has now become the hardest hit country with the highest death toll of more than 30,000 and 630,000 confirmed cases.

Ironically, the Johns Hopkins University figures – regarded as the most reliable – have been criticised for obscuring the degree of impact in the US by breaking up US death toll figures into individual state tallies.

Warning signs for PNG
The warning signs are there for countries such as Papua New Guinea which has already drawn alarm signals from Human Rights Watch, saying that a serious outbreak there would be “a catastrophe”. (Just two “cases” so far, one a foreign mineworker who was repatriated back to Australia and the other a woman in East New Britain who turned out to be a false alarm after a provincial lockdown).

“Even before the coronavirus pandemic, the fragile health system in Papua New Guinea was underfunded and overwhelmed, with high rates of malaria, tuberculosis, and diabetes among its population of more than eight million,” wrote an HRW associate director, Georgie Bright.

“Access to hospitals is extremely limited, with 80 percent of the population living outside urban centres. Prime Minister James Marape has acknowledged the country has only 500 doctors, less than 4000 nurses, and around 5000 beds in hospitals and health centres.

“The country reportedly has only 14 ventilators.”

However, Bright also acknowledged that hopefully there might be mitigating factors, such as large sections of its rural population living in remote mountainous villages in the highlands : “It could be that PNG will be spared the scale of the pandemic seen elsewhere such as Wuhan, a dense urban area with a mobile and older population.”

Vanuatu (population almost 300,000) is another country with serious concerns of “disaster” with a possible outbreak, but Fiji (pop. About 900,000) – although it has 19 confirmed cases so far – seems to be holding its own with the success of its fever clinics that have tested more than 120,000 people in the capital of Suva so far.

Timor-Leste is also on the watch list with an eight cases so far and a furore over the sacking of the acting health minister.

Pushed into the background by the relentless sad statistics and doomsday stories around the globe are some other stories in the Pacific that normally struggle to get an airing in mainstream media.

Growing concern for West Papua
Just over the porous 820 km jungle border from Papua New Guinea, are the two Melanesian provinces Papua and West Papua ruled under protest by Indonesia. Collectively known as West Papua, the region has become a growing public health concern as Indonesia appears headed for disaster.

The coronavirus pandemic is “exacerbating tensions” in West Papua and exposing the “shortcomings” of Jakarta government policy, laments a conflict watchdog group.

It has appealed for greater transparency and more support for the local Papuan administrations in coping with the spread of the virus.

“The virus arrived in Papua as tensions left over from deadly communal violence in August-September 2019 remained high, and pro-independence guerrillas from the Free Papua Organisation (Organisasi Papua Merdeka, OPM) were intensifying attacks in the central highlands.

“Papua’s major faultlines – indigenous vs migrant, central control vs local autonomy, independence movement vs the state – affected both how Papuans interpreted the pandemic and the central government’s response.”

The pandemic has also added new complications such as how many Papuans are “already portraying the virus as being brought in by non-Papuan migrants and the military”. As a result, “hostility and suspicion” are growing.

‘Jakarta six’ episode
Another episode happened in Jakarta this week that ought to have focused attention on the ongoing human rights struggle for Papuans yet was barely noticed in mainstream media in Australia and New Zealand.

A hearing about the trial of six Papuan activists – known as the “Jakarta Six” – will now be held online or long-distance amid the enforcement of large scale social restrictions to contain the coronavirus pandemic.

The accused – five men and a woman – are Paulus Suryanta Ginting, Charles Kossay, Ambrosius Mulait, Isay Wenda, Anes Tabuni and Arina Elopere. They were arrested by police for flying the Morning Star independence flag during a protest action demanding a referendum for Papua in front of the State Palace on August 28 last year.

The hearings into the alleged makar (treason, subversion, rebellion) case have been changed since the coronavirus pandemic has hit Indonesia, particularly in Jakarta.

The team of lawyers defending the six had earlier asked the panel of judges to postpone the hearing. However, the judges refused the request but changed the mechanism for the hearing so that the defendants can remain in jail for the trial.

NZ’s ‘long road back’
Back in New Zealand, the four-week national lockdown has been going encouragingly well, it is into its last week with the debate now moving on to the “long road back” for the economy by relaxing controls – a little – and the manner of how this would be achieved. A decision will be announced next Monday.

The Ministry of Health statistics show just nine deaths so far – mostly elderly rest home patients – with a fairly stable 1386 cases, just 20 new ones announces yesterday that are eclipsed by the rate of recoveries, now up to 728.

The last of 18,000 stranded German and European visitors and tourists seeking repatriation have now returned to their countries. The final Lufthansa Airbus flight had a sole incoming passenger – an Easter Bunny named Jacinda in honour of Prime Minister Jacinda Ardern who has gained admiration for her courageous leadership, clear communication and kindness.

Not to mention the prime minister, her cabinet and civil service managers’ voluntary gesture of a six-month 20 percent pay cut in solidarity with the “struggle that many New Zealanders are facing”.