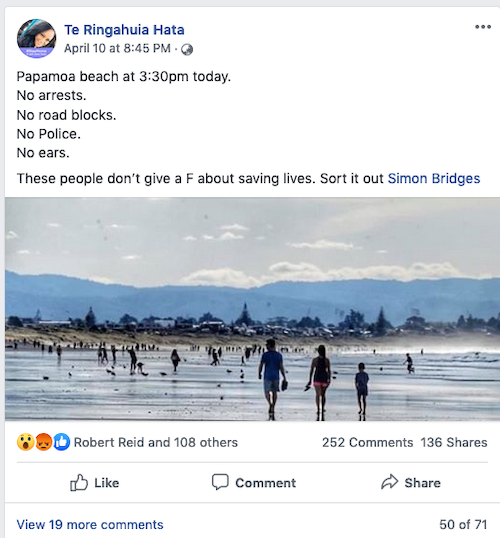 The lockdown breaches over the Easter weekend shows the number of self-entitled and selfish people flouting the rules in New Zealand and Fiji as reports have suggested.

Since alert level 4 restrictions began there have also been 109 prosecutions, 717 warnings and 21 youth referrals.

Director-General of Health Dr Ashley Bloomfield said during a media conference yesterday “police have been very active over the Easter weekend stopping cars and a high presence in the community”.

Police have been busy at checkpoints turning back people attempting to break the lockdown rules and paying little heed to Prime Minister Jacinda Ardern who called for “Staycation” during Easter.

In Papamoa, Tauranga, witnesses said large crowds were photographed on Papamoa beach with apparent disregard for the lockdown rules.

Fiji arrests 193
Meanwhile in Fiji, 193 arrests were made on Saturday night for social gathering breaches, 53 arrested for curfew breaches and one individual was arrested for breach of lockdown restrictions.

Police Commissioner Sitiveni Qiliho said these people were risking the lives of their families and loved ones by leaving their homes, breaching curfew hours and choosing to mingle with potential Covid-19 carriers over yaqona (kava) and drinking sessions.

Fiji Prime Minister Voreqe Bainimarama stressed again why people should respect the lockdown after a nine-year-old tested positive taking the total to 16.

It was the sixth case connected to a 53-year old man, who had travelled to India to attend a religious festival and reportedly ignored quarantine recommendations.

Guam registered its 5th death, a 79-year-old woman, and it now has 133 cases in total. Meanwhile, of the approximate 5,000 people that were aboard the USS Theodore Roosevelt.

The Navy reported 92 percent of the crew was tested, with 447 positive and 3,155 have been moved ashore and one sailor is in Guam Naval Hospital intensive care unit (ICU).

In New Caledonia there are 18 confirmed cases, 1 recovered and President Thierry Santa is in self-isolation after a member of his staff tested positive.

Papua New Guinea has reported a confirmed second case this week in East New Britain and West Papua has 26 confirmed cases and one death.

Timor-Leste recorded its second covid-19 infection at the weekend.

In New Zealand yesterday, Dr Bloomfield said there were 18 new cases, bringing the total number to 1330, and on the day before (Saturday, April 11) it recorded 29 cases with four deaths.

Vanuatu, Tonga, Samoa, Solomon Islands and Palau remain virus free although they have people in quarantine or have carried out tests that proved negative.

As if Covid-19 was not scary enough, last week Cyclone Harold tore through Solomon Islands – with 27 people feared dead, most were swept of a boat – Vanuatu, Fiji and Tonga, wreaking havoc and leaving a trail of destruction in all four Pacific countries.

OPM ceasefire offer
In the meantime, the Free Papua Organisation (OPM) has offered a ceasefire in the independence struggle against Indonesian rule in the Melanesian region in an effort to contain the global Covid-19 coronavirus pandemic.

The option of a ceasefire, however, must also be agreed to by the Indonesian government by withdrawing troops from Papua.

In Papua New Guinea, Police Minister Bryan Kramer has published an extraordinary attack on social media against two leading journalists over their reporting of the Covid-19 pandemic accusing them of “misrepresenting” a financial update last week and suggesting they should be sacked.

And, the economic enormity of the pandemic has prompted the World Bank to announce a rescue financial package of $US14b for the East Asia-Pacific region.

China crowding out rivals
As Nikkei Asian Review reported on Friday, China seeks to crowd out rivals such as the US.

In 2017 alone, Beijing announced $4 billion in aid to the Pacific region, putting it on track to overtake Australia as the pre-eminent donor.

Government debts to China already make up a sizable portion of many nations’ total external borrowing.

According to the latest government financial statements available, loans from China make up 62 percent of Tonga’s of total foreign borrowing; for Vanuatu it is 43 percent, and for Samoa 39 percent.

“That enhances the advantages China has already enjoyed in the contest for influence among these small but strategically important countries,” the Nikkei Asian Review went on to say.