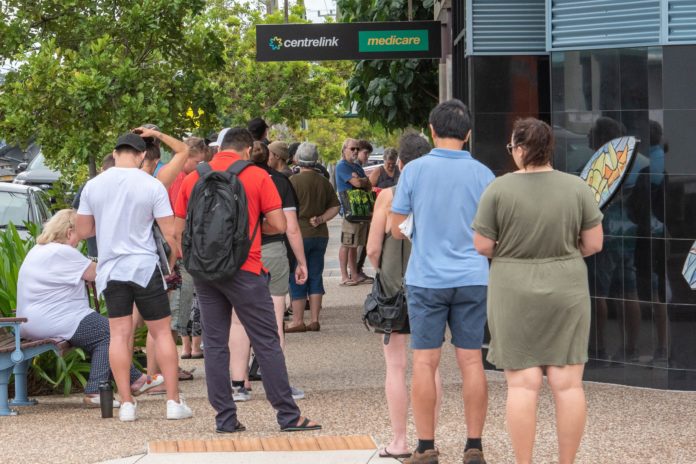 The COVID-19 pandemic is likened to a “war on two fronts” by senior government figures, including Prime Minister Scott Morrison and Treasurer Josh Frydenberg. On one front is the pandemic, which threatens to put unprecedented strain on the health system; on the other front, the lockdown is devastating the economy and employment.

These impacts have prompted debate about protection of renters. During the second world war Australia implemented rent control, protecting tenancies for decades afterwards. In this coronavirus “war”, governments should take inspiration from the past and again implement rent control.

Read more: Rents can and should be reduced or suspended for the coronavirus pandemic

We have already seen governments adopt other “wartime” measures. Commonwealth and state governments have joined forces in a national cabinet, likened to the wartime cabinet Australia had during the second world war.

Images of thousands of Australians queuing for welfare evoke memories of hardship not seen since the Great Depression and then the war. The scale of stimulus is unlike anything seen in Australia before, eclipsing the Global Financial Crisis stimulus package.

Renters already have it tough

Renters are a sizeable and vulnerable cohort. Almost one in three Australians live in rental properties. In Australia, renting has increased from a low of 25% of households in 1986 to 31% in 2016.

Not only are more Australians in rentals, but they are renting for longer. However, as tenancy is less secure than ownership, housing insecurity is a growing problem.

Renters are typically financially worse off than home owners. Based on my analysis of 2016 Census data, the unemployment rate among renters was 10.9% compared to 5.2% for owners.

Renters also generally have lower incomes. My census analysis has found almost half of renters earned less than A$649 a week, compared with only 31% of owners with a mortgage. (Comparisons of renters with outright owners can be misleading, as outright owners have much lower housing costs.)

Lower incomes mean a higher proportion of income is spent on housing. Households with a mortgage spend an average of 15.9% of household income on housing compared to 20.2% for private renters. Further, 43% of low-income renters experience housing affordability stress (defined as a household in the bottom 40% for income spending over 30% of income on housing).

These renters are highly vulnerable to the impacts of the pandemic.

Read more: Private renters are doing it tough in outer suburbs of Sydney and Melbourne

COVID-19 is making it way tougher

The economic crisis gripping Australia will affect an estimated 6 million jobs. But almost 1 million casuals are ineligible for the federal government’s $A130 billion wage subsidy paid to businesses to retain workers.

Disproportionate numbers of renters work in these casual jobs. Their already high rates of financial stress are likely to increase as they lose the income they rely on to pay the rent.

Read more: Coronavirus puts casual workers at risk of homelessness unless they get more support

As business revenues plunge, there are also calls for commercial landlords to provide rent holidays. At least one major retailer has refused to pay rent. To save businesses, the national cabinet last week announced a mandatory code of conduct for commercial tenancies, reducing rents proportionate to reduced turnover.

To date, the national cabinet has only agreed on an eviction moratorium for residential tenancies. It’s welcome but could simply shift payment or eviction into the future for households unable to pay rent – the moratorium does not waive the requirement to pay rent. Some landlords are rushing to evict before state and territory governments follow early mover Tasmania in putting the moratorium into effect.

A warlike crisis calls for a wartime responses

During the Great Depression, calls for greater protection for renters resulted in policies like rent control at state level. Australia’s entry into the second world war ushered in a national approach.

Read more: Explainer: what are rent controls – and who benefits from them?

In Victoria, rent control sat alongside public housing, offering two strong forms of protection to renters from 1938 to the mid-1950s, when both were wound back, in favour of home ownership. Despite this, rent control remained in force in Victoria, protecting thousands of tenancies until the 1980s.

The situation today is remarkably similar to that of the 1940s. In recent years growing numbers of Australians have found themselves in precarious rentals. While home ownership soared from the 1950s, in recent decades ownership rates have fallen as housing unaffordability has risen.

In 2016 rental rates in Victoria reached highs not seen since the late 1950s, when virtually all rents were controlled. Low-income households have been spending unsustainable amounts on rent even before the pandemic hit.

This “war on two fronts” will push many to the brink. A moratorium on evictions will delay the pain, but not avoid it. The national cabinet should take inspiration from Australia’s wartime cabinet and regulate rents nation-wide.

The lowering of commercial rents under the new code of conduct will prevent many business bankruptcies. Setting residential rents at affordable levels would also protect millions of vulnerable Australians. Such a policy would be consistent with Finance Minister Mathias Cormann’s concept of “spread[ing] the pain as fairly and equitably as possible” by sharing the losses with landlords.

Regulating rents would leave a lasting positive impact on Australia. We would come out of this crisis with a fairer rental system than we started with. And hundreds of thousands, if not millions, would be spared the stress of facing the threat of eviction.