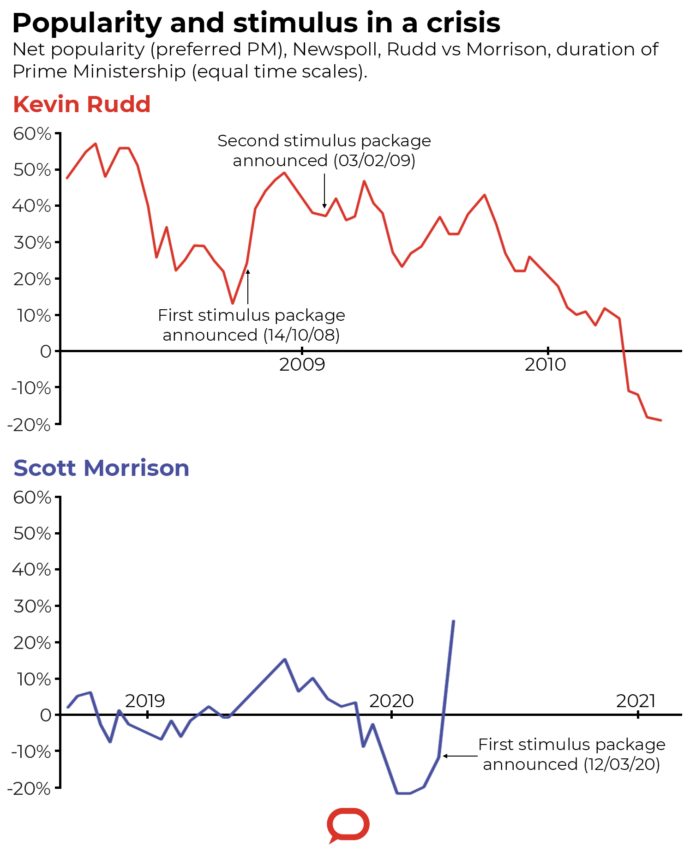 Remember how last year’s Easter felt bizarre because the country was in election-mode? How normal that seems, now everything is surreal, with the nation “holidaying” in this peculiar, unpleasant limbo.

As we contemplate the grimness we should also remember it could be much worse. It’s early days but we’ve dodged the horror of Italy, France, Britain, and the US. So far in Australia, the virus is being contained, the “curve” of new cases flattened.

Nevertheless, this Easter millions of Australians see little but uncertainty ahead, as they worry about their health, their jobs or lack or them, their businesses.

The economic fear inevitably remains dialled high despite a trimmed-down parliament (only 50-plus House of Representatives MPs out of 151) on Wednesday passing the government’s $130 billion wage subsidy package.

Earlier in the week, Scott Morrison had received a Newspoll bounce in his approval, just as Kevin Rudd did in the global financial crisis. Bad as the GFC was, it’s clear this crisis will be much more fraught to exit.

We are only just into the restrictions but already the debate is intensifying about how and when we get out of them – a result of the relatively good news and people’s natural impatience.

The question occupying cooped-up households, half-dead businesses, and anxious governments (and their health advisers) is: what now?

The immediate answer is simple. We need to endure Easter in a virtual monastery. When Health Minister Greg Hunt says “this in many ways is the most important weekend we may face in the whole course of the virus”, it is likely only a minor exaggeration.

The longer term answer to “what now” will involve practical and ethical judgements, and contested views.

The exit strategy is uppermost in Morrison’s mind – he has always bracketed “livelihoods” (aka the economy) with “lives” in his language.

We’re not going to jump from where we are now to that “other side” he and others talk about. We will walk on a long perilous journey requiring complex decisions about steps and timing, with the risk of serious mistakes, and the certainty of pain.

Chief Medical Officer Brendan Murphy says: “We are on a life raft. We now have to chart the course of where we take that life raft.” The national cabinet has asked its health experts for navigational advice. But the issue always comes back to the health-economics balance.

The much-anticipated modelling the government has released didn’t provide much of a compass. It told us the obvious: if we’d let the epidemic rip – which we were never going to – the health system would have been overwhelmed.

The present policy is one of “suppressing” the virus – isolating cases, tracking contacts.

Morrison believes it would be too costly to aim to eliminate COVID-19 here – the New Zealand route.

So the future choice is between attempted continued containment until there is a vaccine – a big operation in testing and tracing – or pursuing some form of “herd immunity”. The latter would allow the virus to move through the community (while protecting the most vulnerable).

The herd immunity path (there’d be a nicer name) would be very controversial and take more lives than attempting to maintain the suppression approach.

Asked on Thursday whether it was possible, when we do unwind the various restrictions, to simultaneously pursue a suppression policy, deputy chief medical officer Nick Coatsworth said:“It’s entirely possible, and that would need to be the aim….The suppression strategy needs to be sustainable in the medium term whilst we work out things like when a vaccine becomes available, whilst we bring new molecules online to be able to treat the virus.”

What is important as discussion gets underway about lifting some restrictions is that we get transparency on the health advice. This is being promised, but it’s no good having modelling long after decisions are made.

There has been more than a dash of “we know best” in how the government has explained things so far. “We’re acting on medical advice”, it has said, to justify this or that measure. But the official health advice has sometimes appeared less than consistent, and been criticised by some experts.

Morrison has canvassed easing restrictions on a patchwork basis, first in places where and when it seems safest to do so. Those places would in effect be trials for elsewhere.

This is logical but won’t be easy. If combined with the continuation of the suppression policy, governments must be willing to reimpose controls if case numbers increase again.

And strict health protocols should be in place for how businesses and organisations deal with fresh cases.

A present challenge is to manage the pressures from stakeholders and the community for an easing timetable. Innes Willox, chief of the Australian Industry Group, wrote this week in the Australian: “we need a path back to getting the economy going again. … Businesses owners and their backers will quickly change direction, make other arrangements or move on if they don’t have some hope or sense that the current restrictions aren’t limitless.”

After an initial period when anyone who criticised the government was likely to be attacked for betraying “Team Australia”, a degree of political normality is returning, at a muted level. Anthony Albanese has become more outspoken, and this week the Senate set up a Labor-chaired committee to examine the government’s response to the pandemic.

On the current timetable, the parliament is not due to meet again until August. The parliamentary hiatus is one restriction which is unnecessary and undesirable.

Morrison says all who have jobs are essential workers. Federal parliamentarians have jobs and part of their remit is to hold regular collective deliberations in Canberra. It’s time they got back to doing so, with provisions for appropriate distancing. One-day dashes are not enough.

– ref. Australia’s coronavirus debate turns to the way out – https://theconversation.com/australias-coronavirus-debate-turns-to-the-way-out-136058