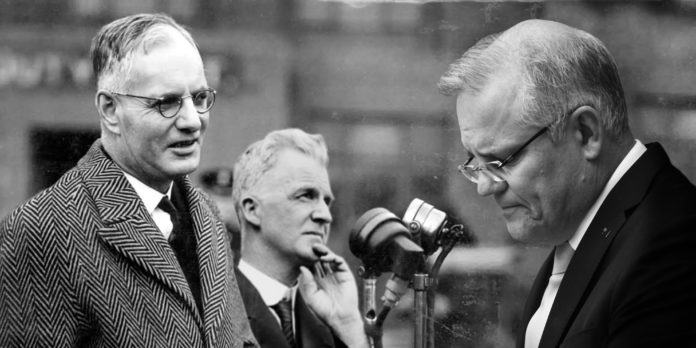 One of Australia’s preeminent historians, Stuart Macintyre, once observed of John Curtin, the Labor Party leader revered for navigating this nation through the dangers of the second world war, that he

would have made a timid and mediocre prime minister in peacetime; in war he assumed duties no one else could discharge. The occasion found the man.

Scott Morrison is no John Curtin. Yet, because of his incumbency coinciding with what is the most perilous peacetime challenge the country has faced in living memory, Morrison now seems destined to be a significant Australian prime minister.

Remember this is the “accidental” prime minister, who obtained the office almost by default after Liberal Party conservatives botched their assault on Malcolm Turnbull’s leadership in August 2018. He then miraculously survived the May 2019 election largely courtesy of Bill Shorten’s chronic unpopularity and Labor’s poorly calculated campaign.

Read more: Coronavirus shines a light on fractured global politics at a time when cohesion and leadership are vital

Fresh from that victory, Morrison’s government spent the following months frittering away the public’s goodwill. It appeared bereft of a discernible policy program, was divided over climate policy, and tainted by the scandal over its pre-election pork-barrelling of community sport funding grants.

Then there was Morrison’s mishandling of the summer bushfires calamity. Put together, it was a record that had the hallmarks of him joining the ranks of the beleaguered set of post-John Howard prime ministers who have each struggled to leave a substantial imprint on the nation.

But now that unflattering history seems like it dates from another age. In the new all-encompassing COVID-19 reality, Morrison has recovered if not the public’s trust, at least its ear, as he has presided over a series of momentous health and economic related responses to the pandemic – the latest among them the gargantuan $130 billion “JobKeeper” payment. The pace and scale of these actions arguably even puts in the shade the policy pyrotechnics of the famed first fortnight of Gough Whitlam’s government in December 1972.

Timing, in short, can be everything in politics.

It has long been recognised that crises present both an opportunity and a danger for leaders. As Macintyre’s observation suggests, Curtin’s reputation – he is commonly lauded as Australia’s greatest prime minister – sprang from a fortuitous congruence between the challenges he met during 1941-45 and his own leadership repertoire.

On the other hand, James Scullin, another Labor leader who was ostensibly equally gifted as Curtin, had his prime ministership broken by the crisis of the Great Depression. Powerless to arrest the country’s descent into economic freefall, Scullin is typically ranked at the bottom of the heap of Australia’s national leaders.

Read more: How Australia’s response to the Spanish flu of 1919 sounds warnings on dealing with coronavirus

In other words, while Morrison’s prime ministership seems fated to have an import that was unimaginable only weeks ago, this is no guarantee that it will be remembered as a success. How skilfully his government manages the crisis and the recovery phase will be the true test. It will be months, perhaps even years, before we will be able to fully measure whether Morrison was the appropriate leader for this time.

The political science literature suggests that in a crisis a leader has to perform at least three essential tasks. The first is to authoritatively interpret the causes, dynamics and consequences of the unfolding crisis. The second is to mobilise and coordinate and, where required, recalibrate existing governing systems to facilitate an appropriate response. Thirdly, it must persuasively explain the crisis to the public and the nature of the government’s actions.

Against these benchmarks, the jury is still out regarding Morrison’s response to the COVID-19 emergency. At least initially, and to be fair in common with most of his counterparts internationally, Morrison appeared slow to fathom the gravity of the threat. There are legitimate questions about whether his government’s actions were sufficiently expeditious and proportionate.

In terms of tweaking governing systems, a “national cabinet” (COAG by another name) has been established as the key decision-making forum for dealing with the crisis, and an advisory network of health bureaucrats and medical experts created.

There are also reports of a heavy reliance on treasury officials, the government seeking counsel from an informal group of business leaders, and the prime minister has also brought on board the former Rudd government minister and ACTU chief, Greg Combet, to provide a conduit to the trade union movement. Indeed, it has been striking to note how willingly Morrison has leaned on public service advice in all this. It is a sharp contrast with a prime minister who had hitherto spoken disdainfully of the “Canberra bubble” and also a far cry from his government’s bloody-minded reluctance to heed expert opinion on climate change.

When it comes to public communication, Morrison early on sent out too many mixed messages. He resorted to hectoring rather than informing and calming. But those tendencies have been less evident in recent days, and he appears to be doing much better than during the bushfires crisis when he lost control of the narrative at the beginning and never recovered it.

Read more: Grattan on Friday: Which leaders and health experts will be on the right side of history on COVID-19 policy?

There will be other things that will help determine Morrison’s effectiveness in dealing with the current crisis, not least his own psychological resilience and the robustness of the personal support network that he has around him. For most of us, the relentless pressures that Morrison and other leaders internationally are enduring at this time are nigh on unthinkable. Part of the legend of the naturally pensive Curtin is that, worn down by the tribulations of governing during war, he literally worried himself into an early grave.

There will also be a question of how Morrison readapts once the worst of the crisis is behind us. Like what happened to Kevin Rudd following the Global Financial Crisis, a potential danger for the future harmony of Morrison’s government is that he will have become habituated to small-circle decision making.

“Events, dear boy, events”, is what the British post-war prime minister, Howard Macmillan, is reputed to have replied when asked by a journalist what he feared most as a leader. Yet unanticipated events can make as well as break a leader. Morrison is currently finding that out – as are we, anxiously looking on.

– ref. Thanks to coronavirus, Scott Morrison will become a significant prime minister – https://theconversation.com/thanks-to-coronavirus-scott-morrison-will-become-a-significant-prime-minister-135314

Despite 432 Indigenous deaths in custody, no one has ever been convicted. Racist silence and complicity are to blame

Despite 432 Indigenous deaths in custody, no one has ever been...

Stimulus that retrofits housing can reduce energy bills and inequity too