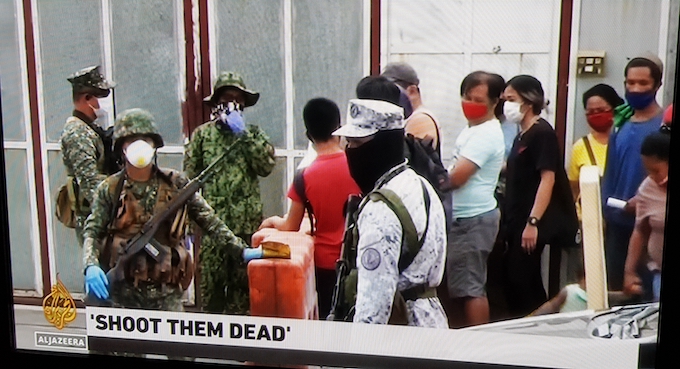 The International Coalition for Human Rights in the Philippines (ICHRP) has strongly condemned the shoot-to-kill order by President Rodrigo Duterte this week as a ‘dangerous’ opening to target and kill anyone in a public space.

“We are raising the alarm in the international community on President Duterte’s directive to kill unruly violators of the coronavirus quarantine,” said coalition president Peter Murphy.

“This pronouncement is a dangerous order that allows authorities to target and kill anyone in a public space.

“It is also a complete violation of the fundamental rights of Filipinos especially in this time of global pandemic.”

President Duterte addressed the nation hours after incidents of unrest and people massing up for food and relief in the country’s capital.

In his televised speech, his tirade of violent threats included: “I will not hesitate. My orders are sa pulis pati military…na pagka ginulo at nagkaroon ng okasyon na lumaban at ang buhay ninyo ay nalagay sa alanganin—shoot them dead,” (I will not hesitate. My orders to the police and military…if they caused any disorder, and they fight back and your lives are on the line—shoot them dead).

The same day, 21 citizens were arrested for going out of their homes and demanding the relief promised by the national government.

Residents rally for food, aid
Residents of an urban community in the biggest city in Metro Manila staged a rally asking for food and aid amid the government’s lockdown to contain the coronavirus, which in turn has left millions of Filipinos jobless and hungry.

“Our support goes to the poor Filipinos whose only crime is to be hungry and demand what is rightfully theirs,” said Murphy in a statement.

“The right to food and basic social services should be ensured especially in times like these. A video circulating in the social media shows citizens demanding food being violently dispersed by authorities.

Recently, the president was given special powers to distribute P200 billion (US$3.9 billion) to more than 18 million poor households. But after a week the aid remains unreleased.

“President Duterte’s criminal negligence coupled with brutal measures to address the pandemic is taking its toll on Filipinos. Millions of informal workers have been displaced and right abuses have been rampant all over the country,” said Murphy.

The authorities have been detaining homeless people, putting curfew violators in cages and using torture methods to punish them, and even arresting citizens over “provoking” posts on social media.

Netizens showed their anger online over the president’s pronouncement to “shoot them dead” and called for him to be ousted. The #OustDuterte hashtag has been trending in the Philippines for two days now.

The World Health Organisation (WHO) states that “measures that limit individual rights and civil liberties must be necessary, reasonable, proportional, equitable, non-discriminatory, and in full compliance with national and international laws.”