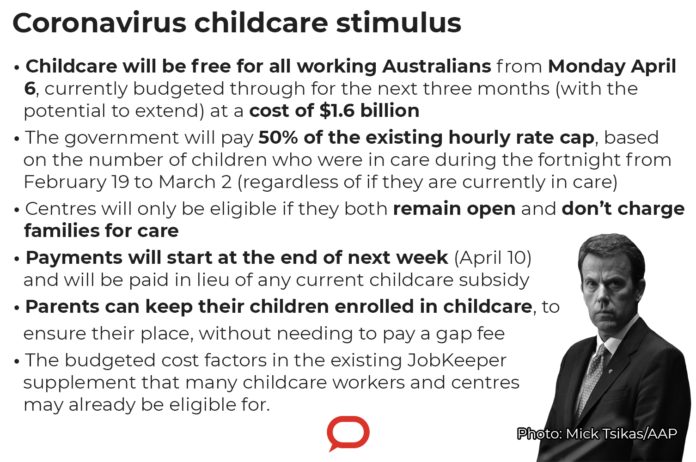 Prime Minister Scott Morrison has announced free childcare for more than one million families, with a funding boost that aims to keep more than 13,000 childcare services across Australia open.

In doing so, the government has backed its earlier recognition of early childhood education and care being an essential service.

Estimates suggest about 650 early childhood education and care services have already closed in Australia due to falling enrolments.

The government plans to pay 50% of the sector’s revenue up to the existing hourly rate cap, based on the enrolment numbers before parents started withdrawing their children because of the COVID-19 pandemic.

It will only do this so long as services remain open and do not charge families for care.

The funding will apply from April 6 based on the number of children who were in care during the fortnight leading into March 2, whether or not they are attending services.

The plan will cost A$1.6 billion over the coming three months.

Today’s announcement is a much needed lifeline for the early education and care sector, which was on the brink of collapse.

By last week, drops in occupancy at childcare centres were estimated to be between 15% and 50%.

Normally, the childcare subsidy is paid directly to early childhood services, which then pass it on to families as a fee reduction. Today’s announcement effectively increases the fee reduction to result in zero fees.

Read more: Quality childcare has become a necessity for Australian families, and for society. It’s time the government paid up

Last month, the government also increased the time families can stay away from childcare without losing their access to subsidies, from 42 days to 62 days. The new plan waives gap fees, so families don’t face costs for keeping children at home.

Previously, families would face fees even when their child was absent from childcare, so services could keep operating. While this made sense in the pre-COVID world, many families discontinued enrolment when they were not sure when their children would return to care.

Federal education minister Dan Tehan said families that discontinued their enrolment since February 17 were encouraged to re-enrol their child:

Finding a place in quality childcare remains a struggle for many Australian families, so support to stay enrolled is a significant benefit.

The funding boost means many centres can stay open and early childhood educators (including the 72% who are part-time or casual workers) will be able to keep working.

Read more: COVID-19: what closing schools and childcare centres would mean for parents and casual staff

JobKeeper payments will be available for those who cannot keep working. This is welcome respect from government for the importance of these workers, who are risking their health to give children continuity of care.

Where are the gaps?

The announcement caused initial confusion about whether free childcare would apply to all families. Education minister Dan Tehan asked that services prioritise vulnerable families and those who can’t care for their children safely at home.

The Prime Minister said “working parents” would be prioritised, not just those working in the most critical jobs.

Tehan later clarified that the support applies to all families who have an existing relationship with a childcare centre.

While families struggling to care for young children while working from home will welcome this announcement, it still leaves uncertainty about how “prioritisation” will occur.

It is also not clear whether the call for prioritisation was expected to limit the number of families using childcare services, to allow educators to implement strategies like extra cleaning and physical distancing to protect children and staff from infection.

Benefits for children’s learning are also largely missing in the political spin. The Prime Minister is right that “children need as much familiarity and continuity as we can help provide”, but early childhood services do more than provide familiar spaces for children.

When it comes to school education, the global focus has remained on keeping children learning, even for those not at school. But research shows learning is even more important in the early years, so governments also need a plan to support educators and families to keep early education going.

Read more: Preschool benefits all children, but not all children get it. Here’s what the government can do about that

Another glitch is that Goodstart Early Learning, Australia’s largest early childhood service provider, is technically ineligible for the government support announced so far. The company’s annual revenue is just above the A$1 billion eligibility limit for access to the new package.

Goodstart itself was born from the last major crisis in Australian childcare, when ABC Learning went bankrupt, placing more than 1,000 services at risk of closure. Goodstart, a not-for-profit social enterprise, was created from a consortium of community organisations and government support, to provide a new model of childcare that prioritised learning over profit.

Education minister Dan Tehan has described today’s reforms as “turning off the old system” of childcare funding. When Australia reaches the other side of the crisis, governments will face tough decisions about whether the clunky pre-COVID system – with childcare funding pieced together from a complex mix of government funding and vastly variable fees – should ever be turned back on.

A broken system will crumble to pieces at the first sign of crisis. Australia has seen childcare come close to the brink of collapse twice now in just over a decade. Governments owe it to children and families to never let it happen again.

– ref. Morrison has rescued childcare from COVID-19 collapse – but the details are still murky – https://theconversation.com/morrison-has-rescued-childcare-from-covid-19-collapse-but-the-details-are-still-murky-134798