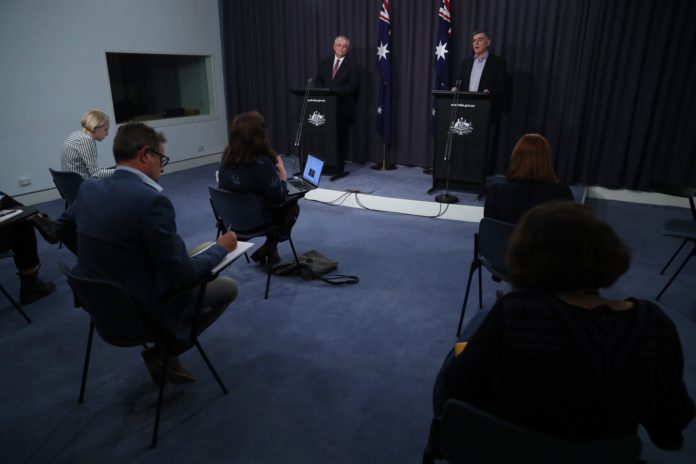 No more than two people are to gather together in public spaces, and playgrounds will be closed in the latest restrictions in the coronavirus crisis.

Meanwhile the government will now scrutinise all foreign investment proposals as well as impose longer time frames on examining applications “to protect Australia’s national interest” during the crisis.

The only exception to the two-person rule, endorsed by the national cabinet on Sunday, will be for people of the same household going out together, funerals (maximum ten), weddings (maximum five) and family units.

As of late Sunday, more than 211,000 tests had been undertaken and there had been 3,966 confirmed cases in Australia, with 16 deaths.

The government is hopeful the curve of the virus may be flattening but the national cabinet warns that in some jurisdictions retail outlets should be prepared for further measures.

States and territories have agreed they will put in place additional measures specific to their own regions, including closing categories of venues, where medical advice supports this.

Announcing the latest restrictions on Sunday night, Scott Morrison said public playgrounds, outside gyms and skate parks will now also be closed, adding to the extensive list of closures already in place.

This means the earlier limit of 10 people for an outdoor bootcamp, set last week, comes down to an individual and their trainer.

Morrison reiterated that in general, people should stay at home except for shopping (as infrequently as possible) for necessary items, medical care or compassionate reasons, exercise, and work or education that can’t be done at home.

He also said the strong advice for those 70 and over was to self-isolate to the maximum extent practicable for their own protection; this applied to those over 60 with chronic illnesses, and indigenous people aged over 50.

Asked why, given the two-person rule, shopping centres were still being allowed to remain open, Morrison said people needed to buy things other than food.

He gave the example of his own family. “Our kids are at home now, as are most kids, and Jenny went out yesterday and bought them a whole bunch of jigsaw puzzles.

“I can assure you over the next few months, we’re going to consider those jigsaw puzzles absolutely essential.

“It’s important that parents and families and households can get the things that they need to completely change the way they are going to live for the next six months at least.” This included people buying sporting equipment for home exercise.

The national cabinet agreed on principles for commercial and residential tenancies.

There will be a moratorium on evictions over the next six months for those in financial distress who can’t meet their commitments due to the virus.

Commercial tenants, landlords and financial institutions are being encouraged to find ways to ensure businesses can survive.

The federal government is working on a huge third support package expected to include wage subsidies.

“Australia is open for business and recognises investment at this time can be beneficial if in the national interest,” he said.

Under the foreign investment regime there are various thresholds for triggering scrutiny, according to type, value and source of the investment.

But now all proposed foreign investments that are subject to the the Foreign Acquisitions and Takeovers Act will need approval.

To ensure enough time for scrutiny the Foreign Investment Review Board (FIRB) would work with existing and new applicants to extend the review time from 30 days to up to six months, Frydenberg said.

The government would give priority to “urgent applications for investments that protect and support Australian business and Australian jobs,” he said.

“The Government recognises that foreign investment will play an important part in helping many businesses get to the other side – securing jobs and supporting our economic recovery.

“However, these measures are necessary to safeguard the national interest as the coronavirus outbreak puts intense pressure on the Australian economy and Australian businesses.”

A reason for the change is likely to be the fear companies could be targeted for takeovers when they are weak or collapsing.