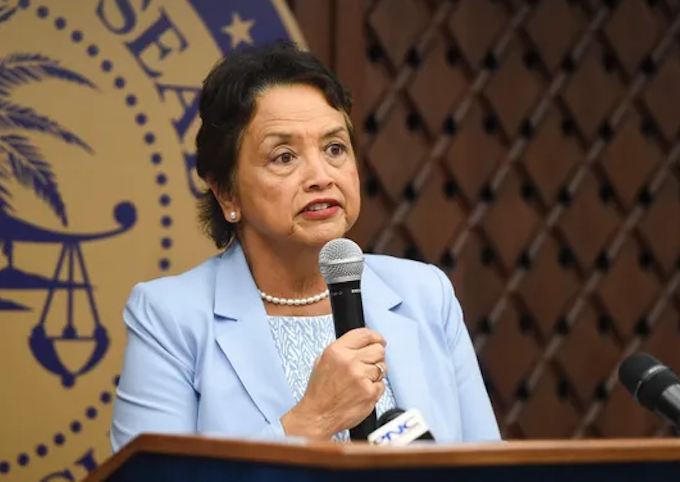 Guam’s government has confirmed a 68-year-old woman died of Covid-19 early today – the first coronavirus-related death in the Pacific.

Dr Mike Cruz, the government official leading the coronavirus response, said the woman was a relative of a person who recently returned to the territory with Covid-19.

He said the woman had “multiple co-morbidities”, including end-stage renal disease, which compromised her immune system.

Auckland’s Mt Roskill Grammar School has warned parents in a letter after a father of a pupil tested positive for the coronavirus, reports Kaniva Tonga.

The father had returned to Auckland from Europe and on March 12 he attended the Tongan Fiafia event at the school.

Guam’s Dr Cruz said there were 15 confirmed cases of the virus on Guam, with the government on Sunday morning declaring a major disaster.

“Five of the first 14 confirmed cases had recent travel, most of which is linked to the Philippines,” Dr Cruz told a news conference this afternoon.

“There is strong evidence that Covid-19 cases has spread throughout our community and has affected residents in the northern, central and southern villages,” he added.

Highest number
With 15 cases, Guam is the country or territory in the Pacific with the greatest number of people affected by Covid-19 – along with Tahiti.

Governor Lou Leon Guerrero called for the removal of US Attorney for the Districts of Guam and the Northern Mariana Islands, Shawn Anderson, after he refused to comply with the mandated quarantine for incoming travellers.

She sent a letter to the US Attorney-General requesting Anderson’s removal.

New Caledonia has two more cases taking the total to authorities say the two have been transferred to the isolation ward at the hospital.

The international carrier Aircalin has released a schedule of flights to repatriate non-residents to France and Australia.

Pohnpei, the capital of the Federated States of Micronesia (FSM), strengthened its ban on incoming travelers on Saturday in the face of the escalating spread of the Covid-19 coronavirus in the region.

The island, which hosts the capital for the four states comprising Micronesia, does not yet have a confirmed case of Covid-19.

The prime minister also announced that six other samples from patients who had been tested were negative.

The results for two remaining patients have yet to be received.

The young woman, who was the first suspected case, had travelled from Auckland, New Zealand to celebrate her 21st birthday in Samoa. She presented at the national hospital in Samoa with symptoms of Covid-19 on Wednesday.

She was admitted and put in isolation while samples were sent off to Australia and New Zealand.

The naming of the young woman by a local newspaper led to her and her family being the target of abuse.

Flights suspended
Air Tahiti Nui has announced that in a week it will suspend all flights from and to French Polynesia for a month because of the Covid-19 outbreak.

There are 15 Covid-19 cases in French Polynesia.

This will effectively end air links out of Tahiti after both Air France and French Bee said they were suspending their flights.

Air Tahiti Nui will end services to Japan this weekend.

This Monday’s flight from Pape’ete to Auckland has been cancelled but a flight from Auckland will go ahead on Thursday.

On March 28 the link to Paris will also be suspended.

She said the patient – a foreign national – had recently returned from overseas, and remained in isolation with what was described as only “mild” symptoms.

Papua New Guinea has now recorded its first case amid flawed communication from the government.

In Fiji a second patient – the mother of the first case has been confirmed as having the virus.

People are being arrested for breaching the lockdown in the second largest city of Lautoka.