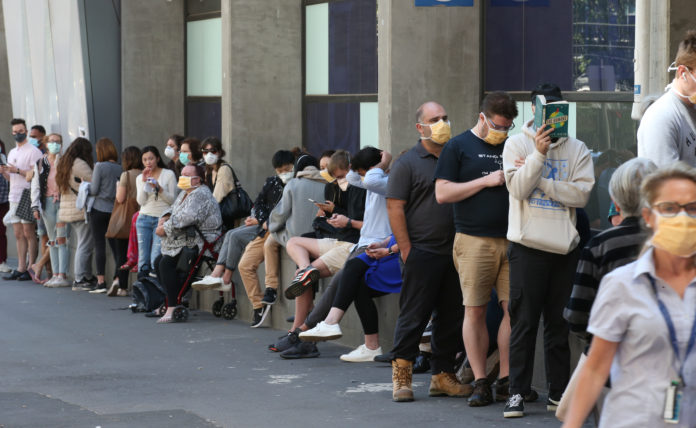 The government will unveil on Wednesday a package of coronavirus health measures, including a network of respiratory clinics, a new Medicare item for tele-consultations, and a communications campaign.

The package, which comes as the number of Australian cases reached 100, will cost A$2.4 billion, which includes $500 million announced last week to help states with their costs on a matching 50-50 basis.

The health measures precede the government’s multi-billion stimulus to address the hit the virus will deliver to the economy, which threatens to push Australia into recession.

Up to 100 “pop up” fever clinics will be established across the country, in a program costing $205 million.

These “one stop shops” will test people worried they may have the virus. They will supplement the work of GPs and state respiratory clinics.

As people become increasingly fearful about the virus, many are seeking tests, even though they fall outside the guidelines recommended for testing.

In Melbourne on Tuesday people queued outside the Royal Melbourne Hospital. In Perth there was a queue even before a new clinic opened at the Royal Perth Hospital’s Ainslie House, despite the clinic supposedly being for those at higher risk. In South Australia a “drive through” clinic has opened.

Commonwealth Chief Medical Officer Brendan Murphy said that in the last few days there had been a “significant surge” in the number of people requesting testing.

Partly this had been sparked by some misinformation in the media suggesting everyone who had flu-like symptoms should be tested, he said. “We’re not saying that at the moment.”

The aim of the pop up clinics in the federal package is to deal with people with milder symptoms, taking the load off hospitals’ emergency departments and GPs, so that hospitals are only presented with the more serious cases.

Each clinic, staffed by doctors and nurses, would be able to see up to 75 patients a day over six months. They could operate as dedicated medical centres.

Health authorities and medical bodies will identify practices in regional, rural and urban areas. Some 31 Primary Health Networks will receive $300,000 to assist in identifying and setting up the “pop up” clinic sites and distributing protective equipment.

Up to an initial $150,000 will be given to help clinics start and offset losses from normal business.

The new Medicare item for telehealth will enable those who are isolated due to the virus to access medical services from home by audio or video. This will reduce risks of transmission from people going to doctors’ surgeries (and the inconvenience of consultations in car parks as doctors keep them out of surgeries).

The telehealth service, starting on Friday, will be bulk billed and available for medical, nursing and mental health medical staff to deliver services over the phone or through a video conference (including FaceTime, Skype, WhatsApp). The new item will cost $100 million and run for six months, when it will be reviewed.

The telehealth services will be available to

The telehealth arrangements will also mean health practitioners who are themselves in isolation will be able to continue to provide services, so long as they are fit enough to do so.

Read more: ‘Fever clinics’ are opening in Australia for people who think they’re infected with the coronavirus. Why?

The planned national communications campaign about COVID-19, including information on how to guard against the virus and what to do if you get it, will start within days and cost $30 million.

A wide range of platforms will be employed, and particular audiences targeted. It will use television, radio, print, digital, social media and displays on public transport and at shopping centres, as well as putting material in doctors waiting rooms. Market research and tracking will be used to refine the campaign.

Scott Morrison said Australia is “as well prepared as any country in the world” to deal with the virus, and the health package “is about preventing and treating coronavirus in the coming weeks.”