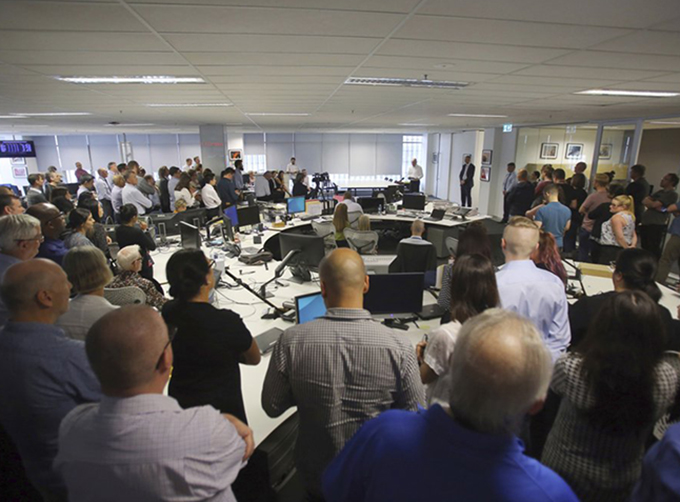 The shock announcement yesterday that the Australian Associated Press newsagency will cease operations after 85 years is a blow to journalism in Australia and the Pacific.

AAP, which is owned by Nine, News Corp Australia, The West Australian and Australian Community Media, provided services to media companies such as newswires, subediting and photography will close with the loss of 500 jobs – 180 of them journalists.

“This is a tragic end to one of the world’s best news agencies, one that has contributed so much to the first draft of history in Australia for 85 years,” says Professor David Robie, director of the Pacific Media Centre.

“It’s a great tragedy and a huge loss for all those talented journalists – reporters, editors and photographers – who have been on the AAP frontline.

“AAP has also played a crucial role in the Pacific, reporting political crises, disasters and social change through two key news bureaus in Port Moresby and Suva for many years.

“Just as the closure of NZPA in 2011- after 132 years – left a gaping hole in New Zealand international coverage, this will be another disaster for Australian public interest journalism.”

Senior lecturer and co-ordinator of journalism at the University of the South Pacific, Dr Shailendra Singh lamented the loss of AAP at a time when Pacific governments are clamping down on the media.

Demise of AAP ‘damaging’
“The demise of AAP is tragic and damaging. The Pacific has lost another source of independent reporting. The timing couldn’t be worse,” said Dr Singh.

“There is a clear trend across the Pacific of erosion of the Fourth Estate as governments in the region clamp down.

“Part of the reason is the unprecedented scrutiny governments are facing from so-called citizen journalists. The governments are lashing out in various ways, such as stronger legislation, and the mainstream news media is caught in the crossfire,” he said.

“Of course, the AAP presence and coverage has waned, but the AAP at least used to step up during crucial times, such as cyclones and political uprisings, as in the Fiji coups and the Solomon Islands conflict.

“Pacific journalism capacity is lacking due to various structural weaknesses in the system and AAP used to fill the gap at crucial times.”

As an example of the work AAP did in the Pacific, it was the first organisation to tell the world of the 1987 Fiji coup, through then Fiji correspondent James Shrimpton, who also played a round of golf a week later with coup instigator Colonel Sitiveni Rabuka and gained another exclusive.

‘Legendary journalists’
“AAP were legendary Pacific journalists. They had bureaux in Port Moresby and Suva, and they covered big stories. They cared about the region.

“It was AAP who told the world first about Rabuka’s coup. It was AAP who, as a competitor, I worried about. And I worked for them over the years, marvellous people…”

AAP CEO Bruce Davidson said yesterday: “We’ve seen a lot of cutbacks, closures, a reduction in news coverage by the traditional media companies across Australia; across the rest of the world.

“News agencies have endured [a tough environment] for quite a long time, but we are now in a situation where too many of our customers are not wanting to pay for our content.

“Too many of our customers are relying on what is on Google, what’s out there on Facebook in terms of their content generation,” Davidson said, explaining the rationale for the decision.

The Australian Media, Entertainment and Arts Alliance (MEEA) trade union labelled the decision to close the newswire as “irresponsible” and called on the government to rein in digital giant platforms, in a strongly worded statement.

“Look at the news stories, the photos, the coverage, the quotes and the enormous spectrum of excellent journalism that AAP has supplied over the past 85 years. AAP delivers news, photos and subediting services that the major media groups either cannot or will not,” MEAA media federal president Marcus Strom said.

Government failure blamed
He blamed the media crisis on the Australian government’s failure to adequately deal with the effect digital content aggregators, search engines and social media has had on news content makers.

“Google and Facebook are riding the coattails of news outlets, using the outlet’s news stories to lure away their audiences and advertisers which leads to the platforms also taking from the revenue streams that those news outlets sorely need,” Strom said.

“This erosion of media revenues through the proliferation of sharing of content for free by the giant digital platforms is a major cause of why AAP is losing subscriber revenue.”

In an earlier submission to the Australian Competition and Consumer Commission (ACCC) digital platform inquiry, MEAA called for a percentage of revenue to be levied on digital platforms for the use of media content, with the funding then to be retained and distributed through a Public Interest Journalism Fund.

AAP made a similar proposal in its submission, the MEAA statement added.

MEAA chief executive Paul Murphy said: “In its final response to the ACCC inquiry last year, the federal government failed to pick up on this recommendation or even to introduce proper regulation of digital platforms. The AAP crisis makes it imperative that this proposal be revisited.

“The government must deal with the serious case of market failure that is resulting in a decline in quality public interest journalism, which is essential for our democracy.”

AAP will close it doors on June 26, while the subediting arm Pagemasters will close in August.