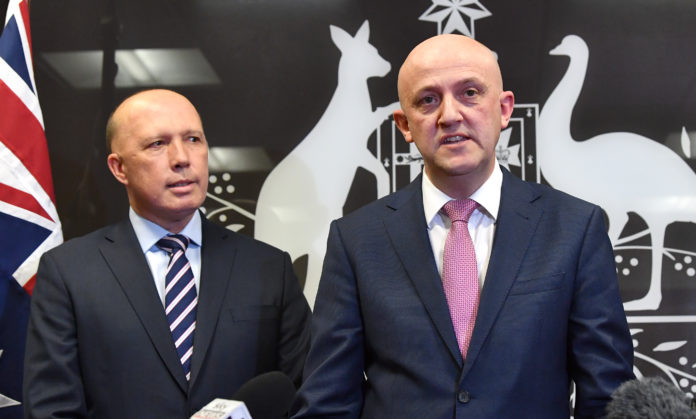 Words matter. Especially when you are the director-general of security and head of ASIO. Barely three months into the post, and delivering his first ASIO Annual Threat Assessment, Mike Burgess spoke with evident care and precision, promising to be “as open and frank with you as I can be about what we do and why we do it”.

Burgess spoke about the two key threats ASIO is dealing with: terrorism and foreign interference. “Violent Islamic extremism of the type embodied by the Islamic State and al Qaeda and their offshoots will remain our first concern,” he said, before adding, “but we are also seeing other actors operating in the terrorism arena.”

Intolerance based on race, gender and identity, and the extreme political views that intolerance inspires, is on the rise across the Western world in particular. Right-wing extremism has been in ASIO’s sights for some time, but obviously this threat came into sharp, terrible focus last year in New Zealand.

The focus on right-wing extremism is not unprecedented, but Burgess elevated it to a level of priority not seen in recent history. The attack in Christchurch in March 2019, in which an Australian-born right-wing terrorist shot dead 51 people in a cold-blooded attack and live-streamed it to a global audience, no doubt precipitated a rethink of the threat by the security community. ASIO’s assessment is clear:

In Australia, the extreme right-wing threat is real and it is growing.

Lest there be any doubt about the nature of the extremist ideology involved, Burgess added: “In suburbs around Australia, small cells regularly meet to salute Nazi flags, inspect weapons, train in combat and share their hateful ideology.”

Just weeks ago, he explained, an Australian was “stopped from leaving the country to fight with an extreme right-wing group on a foreign battlefield”. Australians, he said, are actively participating in “extreme right-wing online forums such as The Base”.

Burgess began his remarks by noting that terrorism was an enduring threat and was not diminishing. “The number of terrorism leads we are investigating right now has doubled since this time last year.”

For the director-general of security to pair the kind of terrorism inspired by Islamic State (IS) and Al Qaeda with right-wing extremism is a remarkable development. It reflects a convergence between Australia and the US on both threat and perception with respect to terrorism. This convergence is important because RWE is far greater problem in the US than it is in Australia, ranking “high” where al-Qaeda and IS rank “low” in recent assessments. It also brings Australia into alignment with the UK and Europe.

Is there a threat from ‘left-wing lunatics’?

In unscripted remarks, the Home Affairs Minister Peter Dutton was not nearly as careful with his language. He was later forced to walk back a loose “both sides” reference to “left-wing lunatics” and terrorism, by explaining that by “left-wing” he meant Islamic extremists.

While it is easy to make fun of the minister’s unfortunate choice of words, he was not entirely wrong in suggesting we shouldn’t care “where people are on the spectrum” of left and right, because “if they pose a threat to our country and want to do harm to Australians then they are in our sights”. Certainly, when it manifests, violent left-wing extremism is no less awful than violent right-wing extremism.

Ever since modern terrorism emerged in Europe in the mid-19th century, left-wing extremism has been a significant threat. This has ranged from the 19th-century anarchists through to the ethno-nationalist liberation movements of the mid-20th century. It also includes the Marxist-Leninist groups of the 1970s and 1980s such as the West German Red Army Faction, also known also as the Baader-Meinhof Gang, and Italy’s Red Brigades.

Outside Europe, groups such as the Japanese Red Army, the Liberation Tigers of Tamil Eelam in Sri Lanka, the Nicaraguan Sandinistas, the Peruvian Shining Path and the Colombian 19th of April Movement have been responsible for the deaths of countless thousands of people.

Charismatic left-wing terrorists such as the Venezuelan-born Ramirez Sanchez, aka “Carlos the Jackal”, like the Argentine Ernesto “Che” Guevara before him, epitomised the murderously delusional ethos of the “professional revolutionary”.

But by the 1990s these groups had all but disappeared (although violent left-wing extremism lives on in Colombia’s FARC narco-terrorists and in the Maoist Naxalite insurgents of India’s eastern seaboard).

Doubtless it was these groups the minister had in mind. Judging from earlier comments, perhaps he also thought some climate change civil disobedience protest groups in Australia, such as Extinction Rebellion, might eventually come to track in the same direction.

However, Burgess made no mention whatsoever of left-wing terrorism. This is likely because ASIO currently finds no evidence of a threat emerging from this quarter.

In his very first public statement as director-general, Burgess pointed out that the rising threats of terrorism, espionage and foreign interference meant “circumstances are stretching current resources”.

How we can combat terrorism in Australia

Left-wing terrorism may yet one day present a threat to Australia, but it does not do so now and is clearly not a current priority for ASIO. The intelligence agency has its work cut out tracking and countering the involvement of Australians in transnational online forums and networks promoting “extremist right-wing ideologies”.

The threat Burgess outlined is chilling, but it is nevertheless reassuring to know ASIO and the Australian security community are focusing so sharply on it.

But, as with the enduring threat posed by groups like al-Qaeda and IS, the security agencies alone cannot provide the full answer. Prevention is always better than cure.

Secretive security agencies can warn of the threat and disrupt plots, but the larger work of prevention is the duty of Australian society as a whole. Decisive and principled political leadership is required to close down the spaces in which right-wing extremist narratives are being freely promoted, inciting hatred and smoothing the way for recruiters.

Such dangerous narratives have found far freer expression in Australian politics than is good or wise.

Political and community leadership at all levels needs to address the intolerant toxic narrative of white supremacist bigotry and demonising. This threat has accelerated as toxic masculinity and right-wing extremism have converged.

Read more: Right-wing extremism has a long history in Australia

While the police and security agencies are tasked with defending Australia against threats such as terrorism, more is required than what they alone can deliver. The best defence is multilayered across the whole of society. It begins with being clear in identifying the threat and pre-emptively responding to it.

Closing down the opportunity spaces for right-wing extremism is vitally important, but so too is developing positive social alternatives to address the legitimate human need to belong and be accepted, which is felt so deeply by the young people that right-wing extremist recruiters are primarily targeting.

Burgess is right in addressing the threat posed by online forums and networks. We certainly need to do all we can to limit their influence and opportunity to do harm. But we need to do more than that. We need to be operating where they are operating and offering something better than what they are offering.

– ref. ASIO chief’s assessment shows the need to do more, and better, to prevent terrorism – https://theconversation.com/asio-chiefs-assessment-shows-the-need-to-do-more-and-better-to-prevent-terrorism-132447

COVID will likely shift from pandemic to endemic — but what does that mean?