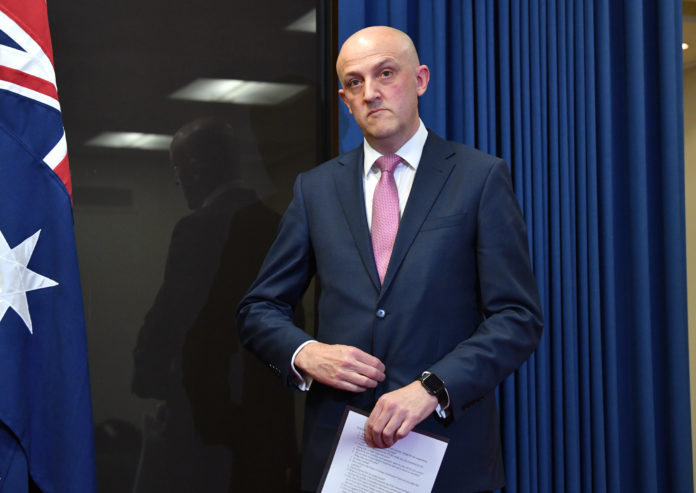 A foreign intelligence service sent a “sleeper” agent to Australia, who provided logistical support for visiting spies, the head of ASIO, Mike Burgess, has revealed, in a speech pledging to intensify the fight against the threat posed by espionage and foreign interference.

Delivering his first “annual threat assessment”, Burgess, who took over ASIO last year, warned: “There are more foreign intelligence officers and their proxies operating in Australia now than at the height of the cold war and many of them have the requisite level of capability, the intent and the persistence to cause significant harm to our national security”.

He said the “sleeper” agent “lay dormant for many years, quietly building community and business links, all the while secretly maintaining contact with his offshore handlers.

“The agent started feeding his spymasters information about Australia-based expatriate dissidents, which directly led to harassment of the dissidents in Australia and their relatives overseas.

“In exchange for significant cash payments, the agent also provided on-the-ground logistical support for spies who travelled to Australia to conduct intelligence activities”.

Burgess did not specify any particular countries conducting hostile operations here and indicated a number were in ASIO’s sights. “Australia is currently the target of sophisticated and persistent espionage and foreign interference activities from a range of nations.”

But interference from China – including its cyber attacks – has increasingly become a primary worry for the Australian government and intelligence community. China’s activities were a major driving force behind the foreign interference legislation brought in by the Turnbull government.

“The level of threat we face from foreign espionage and interference activities is currently unprecedented. It is higher now than it was at the height of the cold war,” Burgess said.

“Espionage and foreign interference are affecting parts of the community that they did not touch during the cold war.

“And the intent is to engineer fundamental shifts in Australia’s position in the world, not just to collect intelligence or use us as a potential ‘back-door’ into our allies and partners,” he said.

“ASIO has uncovered cases where foreign spies have travelled to Australia with the intention of setting up sophisticated hacking infrastructure targeting computers containing sensitive and classified information.

“We’ve seen visiting scientists and academics ingratiating themselves into university life with the aim of conducting clandestine intelligence collection. This strikes at the very heart of our notions of free and fair academic exchange.

“And perhaps most disturbingly, hostile intelligence services have directly threatened and intimidated Australians in this country. In one particular case, the agents threatened the physical safety of an Australia-based individual as part of a foreign interference plot”.

Hostile foreign intelligence services were being directed to target Australia because of its strategic position and alliances, its leadership in science and technology, the expertise across the economy and because it was retooling its defence force and defence industrial base.

“Hostile foreign intelligence agencies have always sought access to personal information because they want to identify and cultivate potential human sources”, Burgess said. Now they were recognising the opportunities presented by the internet and social networking applications.

“In the past, attempted recruitment was time-intensive, expensive and risky … But now, they can use the internet to work from the safety of their overseas headquarters to launch cyber operations against Australian networks and to send thousands of friend and networking requests to unsuspecting targets with the click of a mouse”.

The mere passage of the foreign interference law had discomforted foreign intelligence services. Any future prosecution would have a “further chilling effect”.

But ASIO sought to act before damage was done, and had recommended visa cancellations to stop foreign agents coming and had intercepted agents when they had arrived.

“As Director-General of Security, I intend to step up our actions to counter espionage and foreign interference”, Burgess said.

“We will actively support the prosecution of espionage and foreign interference before the courts,” he said.

“My message here is simple. If you intend to conduct espionage or foreign interference against Australia, ASIO and our partners will be hunting you”.

In his speech Burgess reiterated the “unacceptably high” threat of terrorism that Australia faced would remain for the foreseeable future, saying “the number of terrorism leads we are investigating right now has doubled since this time last year”.

While violent Islamic extremism would remain the principal concern, “the extreme right wing threat is real and it is growing”.

“In suburbs around Australia, small cells regularly meet to salute Nazi flags, inspect weapons, train in combat and share their hateful ideology. These groups are more organised and security conscious than they were in previous years.”

He said earlier this year ASIO advice led to an Australian being stopped from leaving to fight with an extreme right wing group overseas.

“While these are small in number at this time in comparison to what we saw with foreign fighters heading to the Middle East, any development like this is very concerning”.

– ref. ASIO chief Mike Burgess says there are more spies in Australia ‘than at the height of the cold war’ – https://theconversation.com/asio-chief-mike-burgess-says-there-are-more-spies-in-australia-than-at-the-height-of-the-cold-war-132384