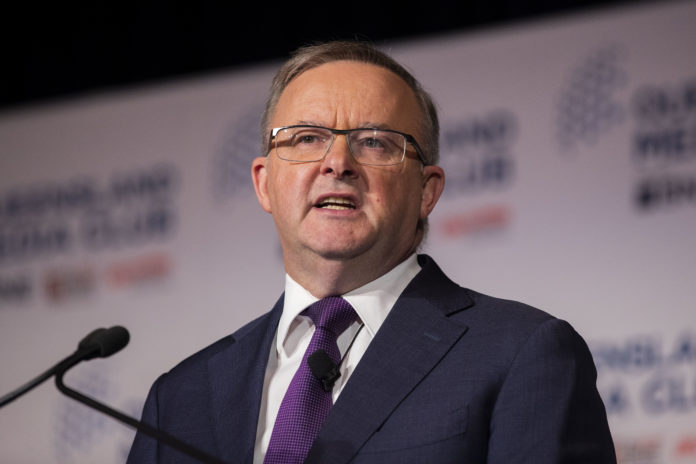 Anthony Albanese will commit a Labor government to adopting a target of zero net emissions by 2050, in a speech titled “Leadership in a New Climate” to be delivered on Friday.

The opposition leader’s embrace of this target, which the ALP also took to the last election, is in line with the policies of state and territory governments, many companies and the Business Council of Australia. It is also the public stand of some Liberal moderates but is totally rejected by the Nationals and hard-line Liberals.

Prime Minister Scott Morrison has refused to adopt it.

“Currently no one can tell me that going down that path won’t cost jobs, won’t put up your electricity prices, and won’t impact negatively on jobs in the economies of rural and regional Australia, ” he said this week.

In his speech, released ahead of time, Albanese also says a Labor government would never use Kyoto credits to meet Australia’s Paris targets, as the government will do if that is necessary.

And Albanese again condemns the government for putting $4 million into a feasibility study for a coal-fired power station in Collinsville, Queensland.

But Albanese is leaving until closer to the election the shorter-term emissions reduction target Labor will adopt.

At the last election it committed to a 45% reduction in emissions by 2030. Labor first took that target to the 2016 election and Albanese has previously said it was a mistake not to review it before the 2019 poll.

He says in his speech the 2050 carbon-neutral target should be “as non-controversial in Australia as it is in most nations”.

“This will be a real target, with none of the absurd nonsense of so-called ‘carryover credits’ that the prime minister has cooked up to give the impression he’s doing something when he isn’t.

On the Collinsville project, he says: “Let’s be clear. There is nothing to stop a private company investing its money in such a proposal. The reason it hasn’t is it doesn’t stack up.”

The $4 million is “just hush money for the climate sceptics who are stopping any real reform and who stopped the National Energy Guarantee supported by Turnbull, Morrison and Frydenberg.

“It’s pathetic. If it made sense the market would provide funding.

“The climate sceptics are market sceptics as well,” Albanese says.

“Investors will not contribute because the economic risks are simply too great. The costs are higher and rising. And the cost of alternatives like renewables is lower and falling.

“Everyone in the electricity sector knows that the only way a new coal power plant will be built in Australia is through significant taxpayer subsidies, including a carbon risk indemnity that the Australian Industry Group estimates would cost up to $17 billion for a single plant.

“That’s why one hasn’t been opened since 2007, construction hasn’t begun on one since 2004 and tenders haven’t been called this century,” Albanese says.

Meanwhile the terms of reference for the bushfire royal commission, released by Morrison on Thursday steer away from the issue of emissions reduction.

They acknowledge “the changing global climate carries risks for the Australian environment and Australia’s ability to prevent, mitigate and respond to bushfires”. But the inquiry is to report on