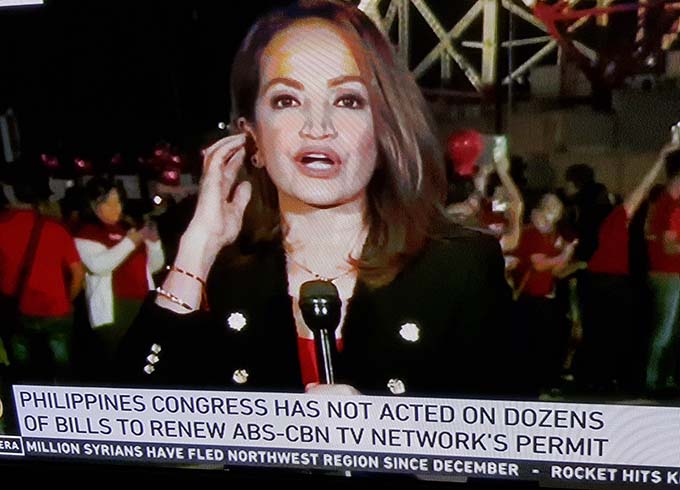 President Rodrigo Duterte takes legal action to shut down the biggest broadcaster in the Philippines in what is being described as the most severe attack on media freedom in the country. Video: Al Jazeera

More than 500 journalists have gathered to protest threats to the survival of the largest television network in the Philippines, ABS-CBN, amid ambiguous statements by politicians regarding the broadcasters’ franchise renewal.

The International Federation of Journalists (IFJ) and its affiliate, the National Union of Journalists Philippines (NUJP), condemns the blockade of the ABS-CBN franchise renewal and re-iterates the need for a review bill to pass through Congress.

At the Red Friday protest on Valentines Day in Quezon City, Metro Manila, more than 500 people gathered to fight the government attempt to close ABS-CBN.

READ MORE: Will media freedom survive in the Philippines?

The protest was organised by the NUJP, Altermidya Network, the Concerned Artists of the Philippines and Defend Jobs Philippines, as well as ABS-CBN employees and supporters.

Answering journalists, Cayetano said: “If I want to grandstand, I will call for a hearing. But is it the right timing?

“Are we all in the right frame of mind or are we still hot-headed? This is not that urgent. Why? Because ABS-CBN can operate until March 2022.”

25-year franchise
ABS-CBN secured its franchise for 25 years under Republic Act 7966, which came into effect on March 30, 1995. The company currently operates free TV Channel 2 and radio DZMM and employs 6730 regular employees, 900 non-regular workers, and more than 3325 other talent in its operations.

Senate President, Vicente Sotto, and House legislative franchise committee vice-chairperson, Isabela Representative Tonypet Albano, have previously reiterated that the broadcasting company can operate until 2022, when the 18th Congress ends, as long as there are a pending bills.

Despite these claims, Philippine’s President Rodrigo Duterte has stated he plans to reject the franchise renewal of ABS-CBN. On December 3, 2019, Duterte said that ABS-CBN would definitely be “out” in 2020.

ABS-CBN has faced an ongoing struggle for franchise renewal since Duterte’s election in May 2016. Two years later, in November 2018 Duterte publicly criticised ABS-CBN for not airing his campaign advertisements during the 2016 election, calling out ABS-CBN’s chairman emeritus Gabby Lopez a “thief”.

Efforts to shut the broadcasting company are being pursued by Solicitor-General Jose Calida who filed a petition against ABS-CBN on February 10, 2020. Calida accuses ABS-CBN of unlawfully exercising its franchise.

The IFJ said: “The ongoing efforts by the Duterte government and the Solicitor-General to block the ABS-CBN franchise renewal are a disgraceful attack on media in the Philippines with the intent to destabilise and threaten independent media reporting.

“Any review of broadcasting franchises should be conducted in an open and transparent manner with inputs from all parties and, particularly, the media itself. The IFJ stands in solidarity with its affiliate NUJP as well as press freedom advocates globally who strongly support the ABC-CBN franchise renewal.”