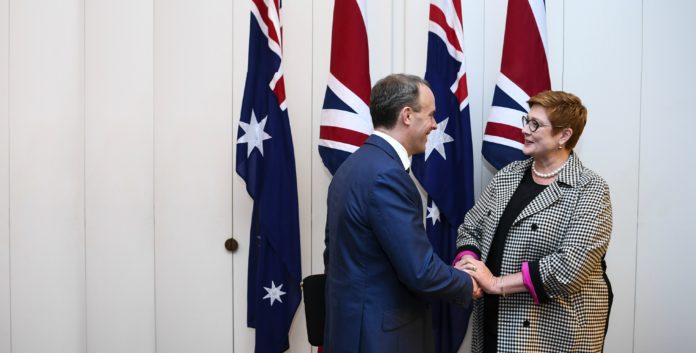 Both agreements are needed to help shore up the world trading system which has been without an effective enforcement system following the decision of the Trump administration to withdraw support from the World Trade Organisation.

In public, the major issue in the EU negotiations has been its determination to enforce so-called “geographical indications”, which limit the use of common names for products such as “champagne”, “feta” and “prosecco” to products made in those places, over and against our access to the wealthy EU market.

An agreement protecting the integrity of both French and Australian wine regions has been in place for more than 25 years. The EU wants to extend it to cheese, other foodstuffs and other beverages.

But it’s climate change that’s likely to be the biggest sticking point, with Australia appearing to drag its feet on its Paris commitments, and our catastrophic bushfires drawing the world’s attention to our government’s record.

Australia will be pressured on climate

The European Union is embracing climate action as a matter of policy, partly for environmental reasons and partly as an element of what it sees as economic sustainability.

In January, under the new leadership of Germany’s Ursula von der Leyen, the European Commission launched what it called the European Green Deal.

It aims to make Europe carbon-neutral by 2050, committing to a trillion-Euro public-private fund to transitions away from carbon. Crucially, it embeds climate action into trade policy.

The most intriguing, and complex, proposal is for a “carbon border adjustment” – a tax, levied on imports from countries without carbon pricing mechanisms.

The Commission also requires ratifying and effectively implementing the Paris Climate Accords as a precondition of trade agreements.

France has been especially bellicose on this point. In 2018, French President Emmanuel Macron pledged not to “sign commercial agreements” with nations that did not respect the Paris Agreement.

In November 2019 the French Foreign Minister insisted the Australia-Europe trade agreement include both ambitious climate targets and sanctions for failing meet them.

Read more: Arrogance destroyed the World Trade Organisation. What replaces it will be even worse

In November, Trade Minister Simon Birmingham fobbed off the French demands, insisting that Australia would meet its targets without difficulty, a statement that might have said more about government messaging to a domestic audience than the state of progress.

Also complicating the talks is the requirement that once negotiations are concluded, the deal still needs the approval of the European Parliament.

Left and Greens members have raised concerns already that the deal could result in increased Australian beef and sheep meat production which would boost methane emissions and emissions due to land clearing and transport.

Optimists in Europe see the negotiations as a way to get Australia to lift its environmental game. In an earlier round of negotiations, it reportedly pushed Australia on its poor fuel quality, labelling this a “technical barrier to trade”.

Negotiations with Australia could turn into a test case for Europe’s climate strategy. Successfully holding Australia to account on its Paris commitments and turning it towards a sustainable economy would be a decisive statement for Europe’s ambitions to lead the world on the climate crisis.

– ref. Our trade talks with Europe and Britain are set to become climate talks – https://theconversation.com/our-trade-talks-with-europe-and-britain-are-set-to-become-climate-talks-130544