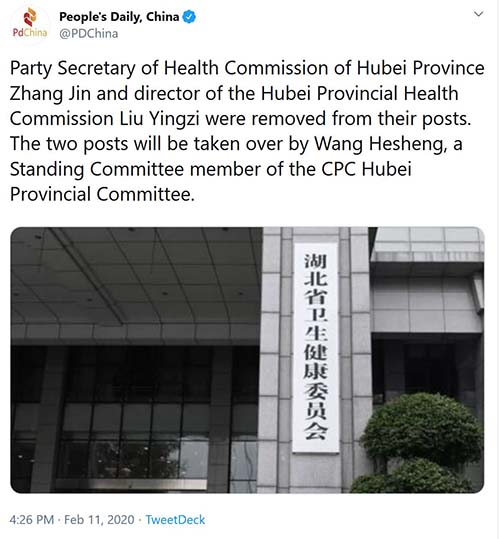 A backlash against China’s official response to the Wuhan coronavirus outbreak has left local officials and the central government scrambling to offset responsibility.

Meanwhile, close to 60,000 people have been infected in China – with a big spike reported this week – and 1367 have died.

A January 20 visit to Wuhan by Chinese Premier Li Keqiang marked the first public acknowledgment of the gravity of the outbreak. This visit became controversial as it happened just two days after the local Wuhan government held a massive public banquet for the Chinese New Year attended by more than 40,000 people despite full knowledge of the risks.

As China health expert and author of Governing Health in Contemporary China Huang Yanzhong explains in a podcast:

The local government, in order not to ruin the atmosphere, decided not to report the actual situation.

The first one to take the blame was Wuhan mayor Zhou Xianwang, who tried to make excuses for the now-infamous banquet:

The reason why the Baibuting community continued to host the banquet this year was based on the previous judgment that the spread of the epidemic was limited between humans, so there was not enough warning.

As per the expected script, Zhou, along with governor Wang Xiaodong and Wuhan Party Secretary Ma Guoqiang from Hubei province (where Wuhan is located), also gave a press conference on January 26. The press event turned into a major disaster after both officials displayed a lack of knowledge about the crisis, making blunt statements that increased the sense of panic among the public.

First, governor Wang fumbled three times when answering a simple question regarding the number of masks available for the local population. He decreased the number of local mask production from 10.8 billion to 1.08 billion and finally 1.08 million.

The video of the press conference was widely shared on Chinese social media and Twitter:

Hubei province governor Wang Xiaodong, on the evening of January 26 at the press conference about the prevention of the new type of pneumonia epidemic, speaking about the number of masks produced in Wuhan. First he said the annual output was 10.8 billion pieces. After a while, he said it was 1.8 billion, and then he changed again to 1.08 million.
The links can also be replayed after 47 minutes and 59 minutes.
I’m going crazy after watching it

The blunder gave birth to memes mocking the incapacity of the local government and showing their lack of preparedness. At the same event, officials also displayed a lack of coordination:

While Governor Wang said that medical supplies were in short supply in Hubei, Mayor Zhou declared that the shortage had been mitigated.

The axe has since fallen on health officials:

What if the central government was also to blame?
During a television interview on January 27, Mayor Zhou offered to resign and take the full blame:

Comrade Ma Guoqiang and I are willing to accept responsibility. If in the end you say someone has to be held accountable, you say the masses are not satisfied, then we’re willing to appease the world by resigning.

But while his 27 January declaration tows the party line, previously Zhou had made an unusual statement during Premier Li Keqiang’s visit to Wuhan on 20 January:

As a local government official, after I get this kind of information I still have to wait for authorisation before I can release it.

While thinly veiled, this statement is, in fact, a direct criticism of President Xi Jinping’s rule. Since taking office in 2013, Xi has accumulated large amounts of power in the central government and, for provinces, this means a very restricted space for local decision-making on sensitive issues.

As China researcher Jude Blanchette from the Washington-based Center for Strategic and International Studies explains:

Central-local relations in the Xi era have seen a severe diminishment of local-level autonomy, which has led to municipal and village officials waiting for clear signals from above before they take action.

Despite Beijing’s claims, the central government may deserve a significant amount of blame. On January 11, the team it dispatched to Wuhan concluded that everything was under control.

“The patients’ condition and the epidemic situation are currently controllable,” said Wang Guangfa, a member of the national medical expert team dealing with the situation.

Yet in a cruel and ironic twist, Wang Guangfa was himself contaminated by the virus. This sense of bitter irony is not lost on local officials in Wuhan and elsewhere.

Xi Jinping has been unusually low-profile since Premier Li Keqiang’s visit. This is interpreted as a form of political self-protection given that the outcome of the fight against the coronavirus remains uncertain.

However, Xi will not be able to stay out of the spotlight much longer. On March 5, 2020, China is holding its annual “Two Meetings” (两会 in Chinese) which are the annual plenary sessions of the two bodies that vote on political decisions at the national level.

As Victor Shih, a researcher on Chinese elites, points out, Xi’s isolation and elimination of other candidates might prove to be dangerous to manage for his political image, if not survival.

Published under a Creative Commons licence.