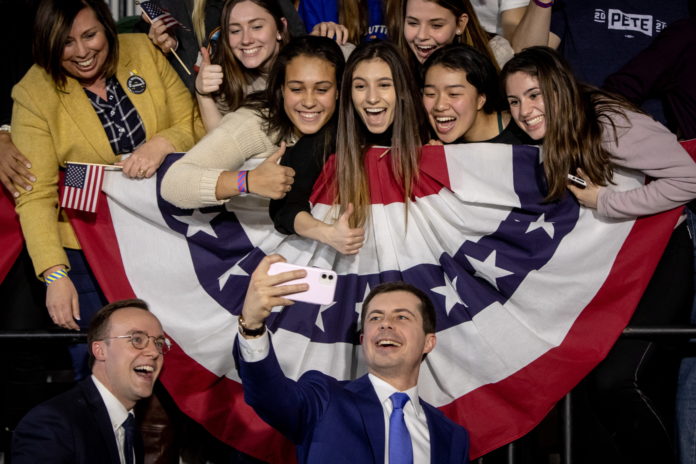 The apparent technical glitches that held up results from the Iowa caucuses for hours unleashed a stream of conspiracy theories online.

Most common were allegations that the Democratic machine was quashing votes for Bernie Sanders. There is no evidence for this, but the comments recall the bitterness that accompanied the contest for the Democratic nomination in 2016.

It is absurd that what happens in Iowa is given such weight, but over half a century it has become the first stage of a complex set of votes to choose a presidential nominee. The first Democratic caucuses, in a state with a population equivalent to southeast Queensland, saw millions of dollars and thousands of volunteers thrown into campaigning for delegates to the Democratic convention, where Iowa will have one-tenth as many votes as California.

But winning Iowa does boost campaigns and should kill off others. There are six potential contenders for the nomination, one of whom, Michael Bloomberg, wasn’t even on the Iowa ballots. Of these, former vice-president Joe Biden did worse than expected; Senator Amy Klobuchar managed to stay in the race.

The vote showed a clear split between “progressive” and “mainstream” Democrats, with Bernie Sanders and Elizabeth Warren – at the progressive end – together polling close to 50%.

Pete Buttigieg polled better than expected. So now the way the more mainstream Democratic vote, currently split between Buttigieg, Klobuchar and Biden, coalesces will determine which one of them seems viable.

A few months ago, Biden was seen as the frontrunner nationally. But as the one candidate who clearly underperformed, he is now heavily dependent on strong African-American support in South Carolina to remain competitive. If his support slips, this provides a real chance for Bloomberg, the former New York mayor, who is older, richer and more liberal than Donald Trump and is spending huge sums in preparation for Super Tuesday on March 3.

Iowa is too white and too rural to be representative of the national electorate, let alone those who might vote Democratic. Over the next few weeks, there will be Democratic primaries in New Hampshire, Nevada and South Carolina, which between them have a population under 10 million, far less than greater Los Angeles.

The real showdown comes on March 3, with primaries in 15 states, including California, Texas and Virginia. But, given the number of potential candidates, it is possible the race for delegates will continue right up to the convention in July in Milwaukee, presumably chosen because Wisconsin is a state the Democrats need to win in November.

In 1980, Teddy Kennedy campaigned against Jimmy Carter right up to the convention, just as Ronald Reagan had battled Gerald Ford four years earlier. In neither case did the incumbent go on to win the general election, which suggests the trap for the Democrats.

Given that all Democrat contenders agree the goal is to beat Trump, one might wish for some judicious ego-searching. The weakness of the American party system means there is no authority able to calculate who would be the strongest candidate in November, and pressure some of the current candidates to withdraw.

The longer the contest continues, the more ammunition this gives the Republicans, who will seize on every critical remark to use in the election. And the fervour of some supporters, most obvious in the Sanders camp, might mean some will refuse to vote in November if their candidate is not chosen.

In a race of four or five strong candidates, the top vote-getter among party loyalists is not necessarily the best candidate to win in November. In a country where it is difficult to get more than 60% of the eligible electorate to vote, a successful candidate needs to inspire people who are largely disinterested and cynical about politics to turn out.

It is not clear that any of the current candidates can appeal both to young African Americans and Latinos as well as older white working-class men in the Midwest. All of the remaining viable candidates are white; three of them are in their late seventies.

Bitter disagreement over the policy proposals of the candidates ignores the reality that unless the Democrats control the Senate, a president is unlikely to pass much legislation. They need a candidate who can bring out voters in states like Arizona, Colorado and Maine, where Republican senators are most vulnerable.

This week, three of the top contenders will be back in the Senate, first to listen to Trump’s State of the Union address, then to vote on the losing side for his removal from office.

One hopes they may sit down with other Democrats to find a way of throwing their weight behind a potentially winning candidate and take control of a process that could leave the party bitter and divided before its delegates even decide on their candidate in July.

– ref. Yes, the Iowa caucuses had major glitches, but the results may not even matter that much – https://theconversation.com/yes-the-iowa-caucuses-had-major-glitches-but-the-results-may-not-even-matter-that-much-131132