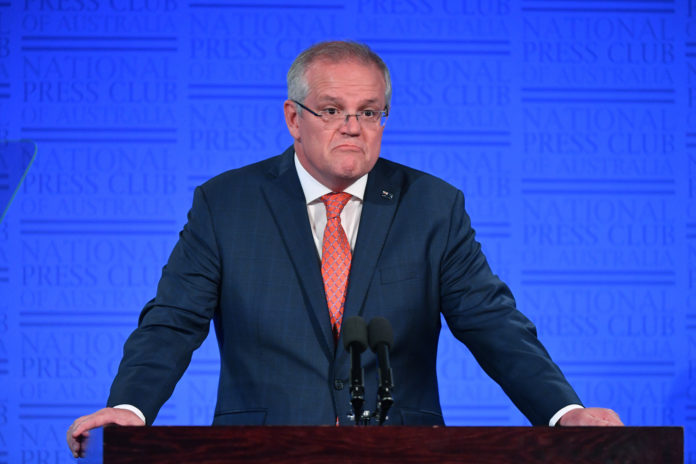 As the suspense over Bridget McKenzie’s future continues, Scott Morrison on Wednesday argued that in allocating public money, it’s politicians rather than officials who understand the community.

Previously, Morrison has highlighted that all the grants then sports minister McKenzie decided upon – overriding the ranking worked out by officials according to the program’s criteria – were “eligible” under the sports scheme.

Answering questions at the National Press Club, he elevated another line.

He recalled when he was social services minister his department had allocated the grants under a program and the result was some “wonderful community organisations” were defunded. He and the then prime minister had to intervene and fix things.

“On other occasions, departments have made decisions which had stripped money from Foodbank, and I’ve had to reverse those decisions,” he said.

Later he elaborated. “It’s not a question of either/or. It’s a question of the two working together. And my best experience as a minister and a prime minister is where you just worked together closely with your public officials and you make decisions.”

Despite Morrison saying how much he respected the “professionalism”, “expertise” and “skills” of the public service, his remarks won’t be lost on federal bureaucrats who already feel somewhat under siege from the PM.

On a literal reading of Morrison’s analysis, McKenzie gets protection on two grounds. The politically-based grants she made were “eligible” and politicians know best anyhow.

This suggests if McKenzie is to be dumped it will have to be on the ground of her failure to disclose her membership of a gun club she funded, rather on the propriety (or rather, impropriety) of her doling out money skewed to marginal seats – which is the more serious sin.

Around the government, there is some bewilderment that Morrison hasn’t dealt with the McKenzie situation before this (which of course does involve Nationals leader Michael McCormack).

It’s impossible to believe Phil Gaetjens, secretary of Morrison’s department, could not have finished his assessment of whether McKenzie had breached ministerial standards days ago if the PM had been minded to take a quick decision.

Whatever method there is in dragging this out isn’t obvious even to some in the Nationals, where McKenzie doesn’t have a great deal of support. It was noticed that on the ABC on Wednesday Victorian National Darren Chester, active in gathering the numbers for McKenzie’s election to the party’s deputy leadership, would not say whether she had his backing.

With parliament returning next week, Morrison can’t dally much longer.

He again played down his office’s part in the sports grants affair, saying “all we did was provide information based on the representations made to us, as every prime minister has always done”.

He also hinted he might make reparations to those organisations that were high on the officials’ list but missed out on grants, and are now squawking.

But beware the fine print in his words. “On any grants program, however it’s done, there will always be many applicants whose projects are very worthy and they’re unable to be accommodated by the budget that we’ve set.

The nub of the McKenzie affair is that the government was being “careful” about the politics in how this money was “managed”. For all Morrison’s public rationalisations, the voters understand this – and the PM must know they do. As he said, politicians “are part of our communities – we live in them – we engage there every day”. And no doubt they are hearing loud and clear the community feedback about the sports rorts.

– ref. View from The Hill: Politicians not bureaucrats are the ones in touch, Morrison claims in sports affair – https://theconversation.com/view-from-the-hill-politicians-not-bureaucrats-are-the-ones-in-touch-morrison-claims-in-sports-affair-130795