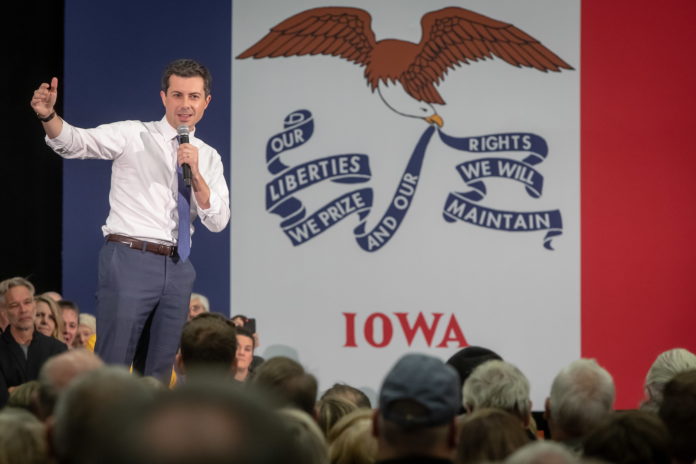 While political parties in both Australia and Britain have recently moved towards leadership contests that give more say to ordinary party members, nothing matches the democratic scale of the American process to nominate presidential candidates.

The Democratic nomination contest, which begins on Monday with the Iowa caucuses and then continues with the New Hampshire primary on February 11, looks and feels a lot like the presidential election that will be held in November.

In 2016, 57.6 million voters participated in the primaries or caucuses to choose the Republican and Democratic candidates, which was just shy of the record turnout in the 2008 contests.

The amount of money now invested in these nominating contests is staggering, as is the attention focused on them by the media.

Read more: In the Democrats’ bitter race to find a candidate to beat Trump, might Elizabeth Warren hold the key?

When did primary voting begin?

Americans have not always chosen presidential candidates this way. Throughout the early days of US politics, state party leaders chose candidates at the national conventions in a deal-making process mostly hidden from ordinary citizens.

A few states adopted primaries early in the 20th century as part of the progressive revolt against elite control of all institutions. Party leaders still made the final choice, but primaries served as a useful “beauty contest” to test a candidate’s viability in the presidential election.

The turning point came with the Democratic National Convention of 1968, a violent affair at the height of the Vietnam War. The vast majority (80%) of the votes in the 13 state primaries that year had gone to anti-war candidates, but party leaders swung the convention to the pro-war vice president, Hubert Humphrey, who hadn’t contested the primaries and went on to lose the election to Richard Nixon.

This bitter and divisive event led to reforms in the Democratic Party that made primaries the main means of selecting candidates. Republicans quickly followed suit, and by 1976, primaries and caucuses decided the nominees for both major parties.

In another quirk of the process, candidates are awarded a certain number of delegates depending on how they fare in these nominating contests. The final vote for the nominee takes place among these delegates at the national party conventions in July and August.

Technically, the delegates decide, but they nearly always affirm the results already decided in the primaries.

Declining influence of the parties

An landmark study published in 2008 examined the importance of the “invisible primary” before voting even begins. In this process, party leaders effectively vet candidates and choose a front-runner to support during the actual primaries and caucuses.

When party leaders coordinate with each other, the authors found, they nearly always get their preferred candidate.

This model has been highly influential, but has required serious re-evaluation since the 2016 election when Donald Trump won the Republican nomination despite fierce opposition from party elites.

Trump’s nomination showed the weakness of the party “establishment” compared to the sheer force of celebrity. His ability to command media attention far outweighed endorsements from party leaders during the nominating process.

The power of Iowa and New Hampshire

States vote at various times between February and June, and a huge amount of attention is given to the states voting first.

Iowa comes first with its caucuses (small gatherings of voters that discuss candidates and choose delegates), followed soon after by New Hampshire with its primary (a straightforward ballot election). South Carolina and Nevada round out the voting in February before the Super Tuesday contests on March 3, when more than a dozen states vote.

With a large field of candidates, Iowa and New Hampshire play a crucial role in giving some candidates momentum, while denying others a pathway to the nomination. It’s not unusual to see candidates drop out after these contests, despite the fact there are still 48 states left to vote.

To make matters more complicated, every state and territory has its own rules on how primaries and caucuses are conducted.

Iowa earned its first-place status because its unique process takes so long. Iowans will meet at more than 1,600 caucus sites on Monday to choose delegates to go to county conventions. Those representatives will then select delegates for the state convention, where it will be decided how Iowa’s delegates to the national convention will be divided up.

This system was devised to give more power to grassroots activists. It often results in chaos. In 2016, there were ties at some caucuses with results decided by games of chance, and the Iowa Democratic Party unilaterally changed one result.

The Democratic National Committee has since imposed new rules to make the process clearer and more transparent.

The problem of race

Another problem is that Iowa and New Hampshire are both whiter and more rural than the rest of the country. Both states are particularly unrepresentative of the Democratic Party electorate, which is more than 40% non-white.

Though Iowans are proud of giving Barack Obama a crucial, early win in 2008, no African-American or Latino candidates gained enough traction in these early states this time around to even make it to the voting.

Julián Castro, one of those minority candidates who has already dropped out, said last year that Democrats can’t

complain about Republicans suppressing the votes of people of color, and then begin our nominating contest in two states that hardly have people of color.

Castro is not alone with this complaint, though others have argued that white and non-white Democratic voters have similar preferences this time around.

There have been attempts since the 1970s to reduce the importance of these two states in the nominating process, but they have fiercely resisted change.

New Hampshire has enshrined in law that it must hold its primary before any other state. And even without Republican challenger to Trump this year, the Iowa Republican Party is still holding its laborious caucuses.

In the words of the state’s Republican chairman,

we cannot go one year without Iowa first-in-the-nation or we are done.

The nominating system, then, is a huge and unwieldy monster. Other than the reforms of the 1970s, there has been little conscious design of nominating institutions.

Instead, haphazard bargains have hardened into historical legacies. The constitution also has nothing to say about political parties and provides no guidance on how nominations could or should be done.

There may be widespread dissatisfaction with the length and expense of primary campaigns, the outsized influence of early states and the ugly conflicts primaries cause before the real election even begins.

But major reforms are unlikely in the near future. As a result, those who want to succeed must master an arcane system, not try to change it.

– ref. The US presidential primaries are arcane, complex and unrepresentative. So why do Americans still vote this way? – http://theconversation.com/the-us-presidential-primaries-are-arcane-complex-and-unrepresentative-so-why-do-americans-still-vote-this-way-129759

Can the Pfizer or Moderna mRNA vaccines affect my genetic code?