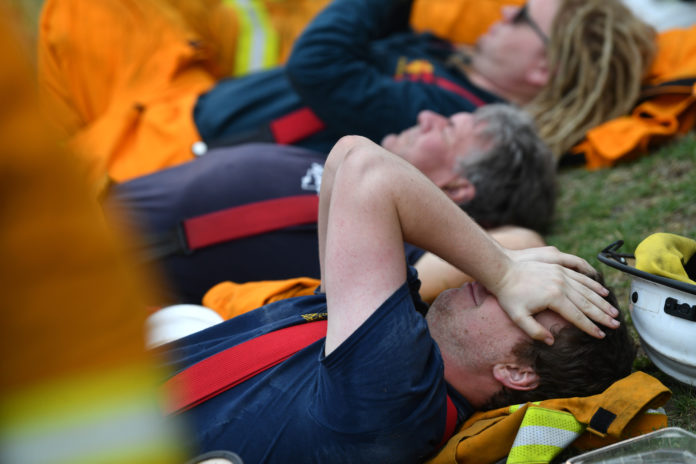 Many firefighters will by now be exhausted, having been on the front line of Australia’s bushfire crisis for weeks or months.

This bushfire season has been unrelenting, and the hottest months of summer may still lie ahead.

In part, the toll is physical. The flames are high, they are intense, and they move fast. It’s hard to breathe because the air is so hot.

At the same time, first responders have witnessed widespread devastation. To land and livelihoods, to people and animals. Meanwhile, grief for the death of fellow firefighters feels raw, and the risk to their own lives very real.

We’re right to be concerned about firefighters’ mental health.

Every 4.3 weeks, a firefighter, paramedic or police officer dies by suicide – and that’s when it’s “business as usual”.

Research shows our first responders are more likely to be diagnosed with a mental health condition than the overall Australian population. They are more than twice as likely to think about suicide, and three times as likely to have a suicide plan.

This paints a grim picture of the well-being of a population who dedicate their professional lives to helping others.

Read more: As bushfires intensify, we need to acknowledge the strain on our volunteers

It’s likely responding to a disaster on the scale of the current bushfires could increase the risk of mental illness for some.

If firefighters are not coping, they may develop psychological disorders including post-traumatic stress disorder (PTSD), anxiety, depression, and substance abuse.

PTSD develops when a person isn’t able to recover after experiencing a traumatic event.

Some firefighters may develop symptoms while they’re still fighting the fires. They may feel on edge, but push down their fears to get on with the job. However, it’s more likely symptoms will only appear weeks, months, even years down the track.

PTSD is associated with significant impairment in day-to-day functioning socially and at work. For firefighters and others with PTSD, typical symptoms or behaviours will include:

Volunteers in regional communities are particularly susceptible to trauma. They have often joined fire brigades to help protect their own communities, and then face trying to save their own homes or those of neighbours and friends.

We also need to be mindful of retired firefighters for whom these current bushfires will have triggered painful and disturbing memories. They may not currently be on the front lines, but they only need to turn on the television, open the newspaper, or look at social media to be taken straight back to Black Saturday or whatever particular event is distressing for them.

The problem with reaching out

The increased prevalence of mental health issues among emergency responders suggests many existing emergency service well-being programs are failing those who need them the most.

In Australia, these programs are largely based on a what’s called a “resilience model” that focuses on people “reaching out” and seeking help when they need it.

First responders may be unlikely to take this initiative in the middle of a mental health crisis, when it’s often a struggle even to pick up the phone to a loved one, friend or colleague.

Instead, we need an approach to well-being that removes the onus on the individual. We need to shift our thinking from a model that requires the individual to “reach out”, to a model that also values others “reaching in” to identify those who may be struggling.

Ambulance Victoria’s Peer Support Dog Program, which allows staff to bring in accredited dogs to create social interactions and conversations, is a good example of how “reaching in” helps with first responder well-being. This kind of approach empowers people through social connections and the appreciation they are also supporting others.

While employers need to do more in to facilitate “reach in” programs, anyone can create informal support networks. Whether friendship groups, community groups, sporting groups, or something else, the underlying thread should be a committment to each other’s well-being.

Read more: The rise of ‘eco-anxiety’: climate change affects our mental health, too

As we continue to contend with this crisis, ensuring firefighters feel supported can make a difference to their well-being. If you see a responder in the street, say thank you. If you see one in a cafe, shout them a cuppa. If you have kids, get them to write a letter or draw a picture and drop it off to the local emergency services station.

We can’t eliminate the risk firefighters will suffer with mental health problems after what they’ve been through, but these little acts of kindness can make a difference.

– ref. To improve firefighters’ mental health, we can’t wait for them to reach out – we need to ‘reach in’ – http://theconversation.com/to-improve-firefighters-mental-health-we-cant-wait-for-them-to-reach-out-we-need-to-reach-in-129900