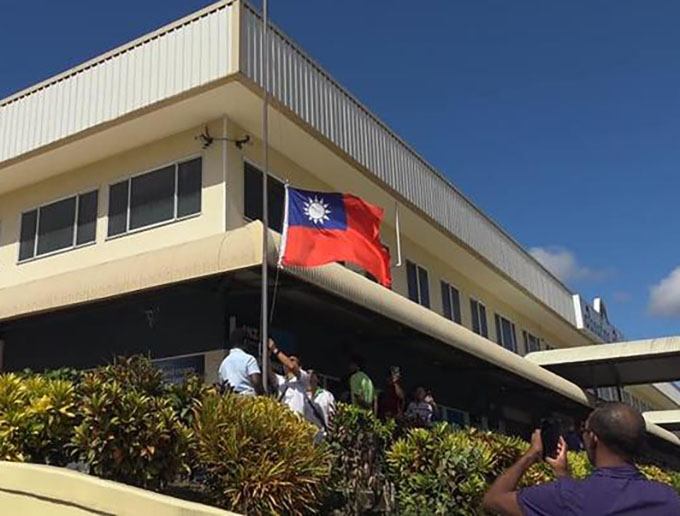 By Jamie Tahana of RNZ Pacific

Taiwan suffered two major diplomatic blows in the Pacific this week with both the Solomon Islands and Kiribati severing their ties in favour of China.

In just four days, Taiwan’s diplomatic allies fell from 17 to 15, further isolating the island as Beijing aggressively courts the handful of countries that still recognise the government in Taipei.

The Pacific had been a stronghold of support for Taipei as its diplomatic allies steadily dwindled. Until this week, six countries in the region recognised Taiwan over China. But in terms of population, Solomon Islands and Kiribati were the biggest.

The first domino to fall was Solomon Islands. Since the government of Prime Minister Manasseh Sogavare was re-elected last year, there had been persistent murmurings about a potential switch that only grew louder when a taskforce formed by Sogavare recommended a change in relations.

On Tuesday, Taipei tried to front-foot an imminent announcement from Sogavare, declaring that ties with Solomon Islands had been severed with immediate effect.

At 11:30am, the Taiwanese flag in Honiara was lowered, and the plaque removed from the embassy entrance. A plane was on its way to take their diplomats home. All technical and medical personnel would be leaving, too.

“This is a choice the Solomon Islands government has made, leaving us with no other option but to respond in this way,” said Taiwan’s President, Tsai Ing-wen.

On Friday, the second domino fell.

Kiribati President Taneti Maamau made an announcement on national radio. His country would also be switching to China. That, too, brought swift rebuke from Taiwan.

The statement said Maamau had recently sought financial assistance from Taiwan to help buy airplanes for the national airline, Air Kiribati. The Taiwan government had suggested lending money to buy the planes, but the Kiribati government had instead demanded a donation.

“According to information obtained by Taiwan, the Chinese government has already promised to provide full funds for the procurement of several airplanes and commercial ferries, thus luring Kiribati into switching diplomatic relations,” the statement read.

Maamau and the Kiribati government were unable to be reached for comment on Saturday.

Taiwan is ruled by the Republic of China government in Taipei, where it has been based since it lost a civil war on mainland China to Mao Zedong’s communist forces in 1949. Beijing considers the island its own territory – a renegade province – and neither Beijing or Taipei will maintain diplomatic ties with countries that recognise the other.

As the flag lowered outside the Honiara embassy on Tuesday morning, a large mournful crowd had gathered to farewell the ambassador, Oliver Liao. Local staff were in tears as Liao embraced them a final time on his way to the airport.

“Our friendship continues, especially our friendship with the civil society, we continue to regard you as really good friend,” Liao told the crowd. “Over the past few years, in my tenure serving this embassy, I have been so deeply touched by your support and your friendship.”

“We really love you,” he said ruefully.

Later on Tuesday, a crowd marched through central Honiara protesting the decision by the Sogavare government.

The premier of Malaita province, Daniel Suidani said his people were not happy with the switch, with the change the latest touchstone for the independence movement there. Suidani said he would push for independence to maintain ties with Taiwan, if there was backing from Malaitans.

Kenilorea, who is the son of the country’s founding Prime Minister, was once the permanent secretary of the Ministry of Foreign Affairs and is the current chair of the parliamentary foreign affairs committee, said the signs for the future were already ominous.

“The reality is that we will be expecting a lot of interest now from such a dominant partner, and the fact that we are already marching to their drumbeat … is an ominous sign that they are already dictating our every next moves,” he said.

In Kiribati, there was a similar reaction there, too.

“We cannot understand the decision,” said Sir Ieremia Tabai, a former President who is now a leading opposition parliamentarian. “At the last election they said to the public that there would be no change in terms of recognition of Taiwan, so we are very surprised that they made the decision now.”

“They don’t have the mandate to change the recognition,” Sir Ieremia said.

But unlike Solomon Islands, it is not the first time Kiribati has changed colours. For 23 years from 1980, Kiribati maintained relations with Beijing, even hosting a Chinese satellite tracking station on South Tarawa, near a similar US facility in the Marshall Islands.

That was until former President Anote Tong switched to recognise Taiwan in 2003, and the Chinese satellite facility and embassy in Tarawa were promptly abandoned.

Sir Ieremia said that if the opposition was elected to government in elections that are due to be held in Kiribati next year, then diplomatic recognition would be switched once again.

The Solomon Islands Prime Minister, Manasseh Sogavare, was adamant that there would be no going back. In an 11-page statement released to media on Friday night, he defended his cabinet’s move, saying any decision otherwise would have been irresponsible.

“While we cannot deny the longstanding friendship we have maintained with Taiwan, the future stability and wellbeing of Solomon Islands depends on our own ability to engage at the international level with development partners capable of advancing our national interests,” he said.

Sogavare stressed that recognising China would not mean taking on risky loans or falling into a debt trap, as Taiwan’s President warned in her announcement.

Losing its two largest diplomatic allies in the Pacific is a significant blow for Taiwan and its President, Tsai Ing-wen, ahead of elections on the island in January. Since she was elected in 2016, seven allies have fallen to Beijing amid rising tension between the two sides of the Taiwan Strait.

The latest decisions by Solomon Islands and Kiribati are likely to ripple through domestic politics there, analysts have said, with elections less than four months away.

Tsai, a pro-independence politician, will be fighting for re-election against Han Kuo-yu, an opponent who is friendlier towards China.

But that local dynamic was one of the justifications given by Sogavare in his statement.

“The Solomon Islands is better served making a decision that reflects our long-term development interests rather than being uncertain over what might happen should one day Taiwan democratically decide to reunite with mainland China,” he said.

For now though, Taiwan’s remaining allies in the Pacific are remaining steadfast in their support.

The Marshall Islands and Palau, both countries in free association with the United States, have confirmed their continued backing for Taipei, and Tuvalu’s new Prime Minister, Kausea Natano, on Friday affirmed his country’s continued support.

However, the government of Nauru’s new President Lionel Aingimea is yet to comment publicly about his country’s relations with Taiwan.

But that doesn’t mean Taipei and Beijing won’t continue hustling.

At a news conference on Friday, a Chinese foreign ministry spokesperson, Geng Shuang, was asked whether China was pushing for Tuvalu to switch recognition.

“China’s position is consistent and clear,” he said. “We stand ready to develop friendly cooperative relations with countries around the globe on the basis of the ‘One China’ principle.”