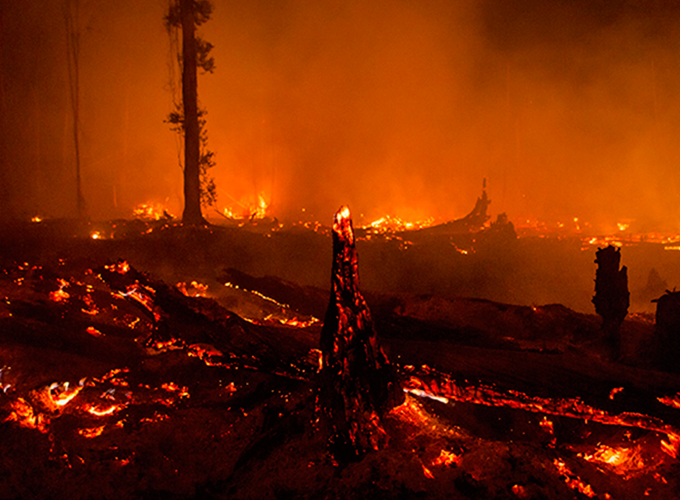 Officials have said that about 80 per cent of the fires were intentionally set to make room for lucrative cash crops like oil palm.

Spokesman for Indonesia’s disaster management agency Agus Wibowo said that these “slash and burn tactics” were the quickest and cheapest method for farmers to clear the land of its carbon rich rainforests.

Aerial photographs have showed huge clouds of white smoke across vast areas of Kalimantan, the Indonesian part of Borneo, which is home to the endangered Orangutan.

The toxic haze from the fires has also been affecting neighbouring countries, with hundreds of schools in Malaysia forced to close, reports The Guardian.

Indonesian officials have reportedly attempted to deflect some of the blame for the smoke to fires in Malaysia.

“The Indonesian government has been systematically trying to resolve this to the best of its ability. Not all smog is from Indonesia,” said Indonesia’s Environment Minister, Siti Nurbaya Bakar.

However, her Malaysian counterpart Yeo Bee Yin has since released data from the ASEAN Specialised Meteorological Centre (ASMC), which showed the total number of hotspots in Kalimantan was 474 and 387 in Sumatra. By comparison, only seven were recorded in Malaysia.

According to CNA News, Indonesian president Joko Widodo has said he has “made every effort” to extinguish the fires by deploying aircraft and 6000 troops to the hot spots and holding a “salat istisqa”- a prayer to Allah for rain in times of drought.

If nothing comes of the prayer, Coordinating Minister for Politics, Security and Legal Affairs Wiranto has said that the government will seed the clouds with chemicals to prompt “artificial rainfall”, reports Detik News.

While 200 people have been arrested in relation to the fires, officials have said that air quality had been recorded as “unhealthy” or “very unhealthy” in Malaysia, Sarawak and Singapore.

Indonesian forest fires have been a major environmental and health issue in recent decades as dryer conditions and the growing global demand for palm oil exacerbate their spread.

The 2015 forest fires resulted in huge plumes of smoke reaching as far away as Cambodia. Research has estimated at least 23 million were affected and over 100,000 thousand were killed from respiratory related illnesses in Indonesia alone.

The cost to mitigate the 2015 haze was reported to be US$40 billion.

The fires in Indonesia have added to global alarm about the dire situation in Brazil, where blazes have consumed over 2 million acres of rainforest in the Amazon basin, known as the “lungs of the earth”.