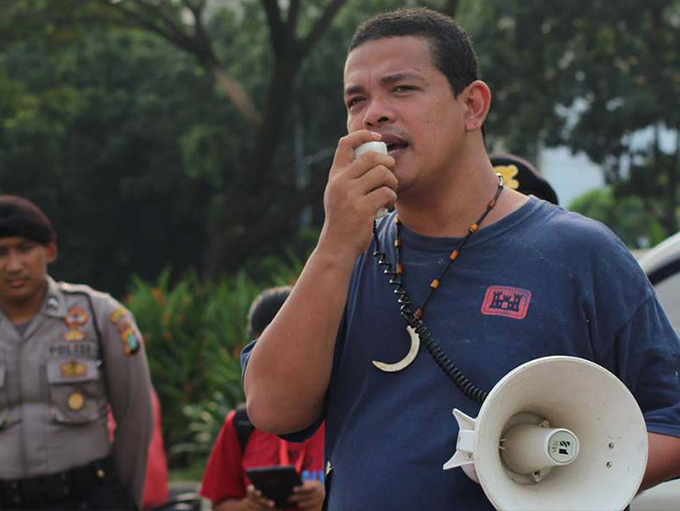 Two of the eight were arrested for allegedly flying the Morning Star flag during a rally in front of the state palace last week.

Anes Tabuni and Charles Kossa were arrested on charges of coordinating the protests, making the invitations, mobilising the protesters, preparing the flags and giving speeches.

The raising of the Morning Star – the West Papuan flag of independence – is considered a crime in Indonesia and carries with it a potential 15-year prison sentence.

Reaction from protestors
The arrests sparked a reaction from scores of fellow demonstrators who went to the Metro Jaya regional police headquarters on Saturday.

They planned to surrender themselves to police as a show of solidarity with their two colleagues as they had all participated in the rally.

“Overnight we communicated with all of the groups from Papua and West Papua calling on them to gather [at the Metro Jaya headquarters], we will go there and surrender ourselves, we also took part in the rally so please arrest us [too],” said Papuan student public relations officer Ambosius.

“We won’t return home without our friends, we’ll get them home no matter what it takes,” he said.

Police surround dormitory
Ambosius said that the arrests occurred on the evening of Friday August 30, when police encircled the Lanijaya student dormitory in Depok and forced their way in.

He said the students were roused and the males ordered to remove their shirts. After an interrogation, Tabuni and Kossay were taken away by police to the Metro Jaya headquarters.

The other six activists were arrested on similar charges and have been brought in for police questioning, reports CNN Indonesia.

The legal team representing the arrested has confirmed that Surya Anta was arrested at a Jakarta shopping centre on Saturday afternoon.

Some of the other arrests took place at the same time as the solidarity action in front of the Metro Jaya regional police headquarters on Saturday.

Arrests ‘unwarranted’
According to a press release from the legal team, the arrests were carried out without warrants.

“The joint team of officers [making the arrest] also threatened them saying they weren’t allowed to take videos or pictures. The arresting officers even assaulted one of the women when they tried to break free,” read the press release.

The legal team is asking the police and other parties to prioritise the principles of human rights when processing the detainees.

Meanwhile, four Australian nationals are to be deported from Papua for allegedly taking part in the demonstrations, reports the Jakarta Post.

Indonesian officials have accused West Papuan liberation groups of collaborating with foreign entities to kindle unrest in the region.