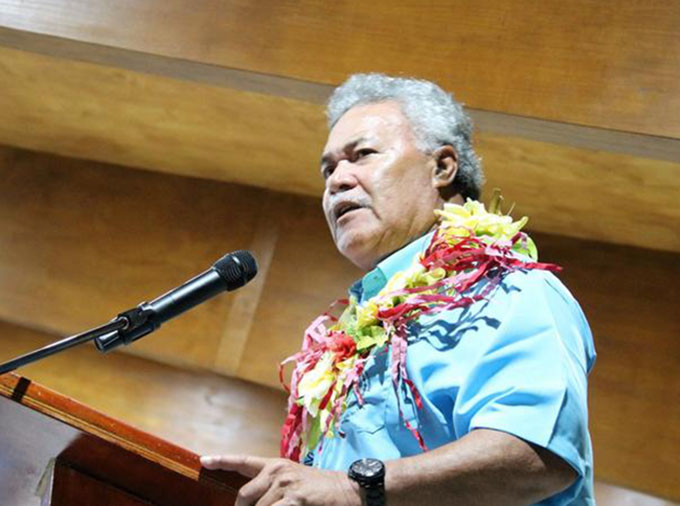 In an interview with RNZ on Sunday, Enele Sopoaga also threatened to pull Tuvaluan labour from Australia’s seasonal worker programme in light of comments by Deputy Prime Minister Michael McCormack, who was recorded saying people from Pacific countries threatened by climate change – like Tuvalu – would survive because “many of their workers come here and pick our fruit”.

Australia’s High Commissioner to Tuvalu would be summoned to explain the comments on Monday, Sopoaga said, and he would cancel the programme if he wasn’t satisfied. He would also encourage the leaders of the other Pacific countries – including Kiribati, Samoa and Tonga – to do the same.

“I thought the Australian labour scheme was determined on mutual respect, that Australia was also benefiting,” said Sopoaga. “We are not crawling below that. If that’s the view of the government, then I would have no hesitation in pulling back the Tuvaluan people as from tomorrow.”

“I don’t think the Tuvaluan people are paupers to come crawling under that type of very abusive and offensive language,” he said. “If New Zealand is thinking the same way, we’ll have no other option but to do that [there too].”

McCormack’s comments came after the region’s leaders – including Sopoaga, Morrison and New Zealand Prime Minister Jacinda Ardern – met for a marathon 12 hours on Tuvalu’s main island, Funafuti, on Thursday with Australia, the region’s largest economy and emitter, pitted against the Pacific.

The Pacific countries wanted strict commitments to cutting down greenhouse gas emissions, a phase out of coal power stations, support in replenishing the UN’s Green Climate Fund and a strong and united communique that they could take to international climate talks at the UN next month.

But Australia refused to budge on certain red lines, which included insisting on the removal of mentions of coal, a commitment to limit global warming to under 1.5C and drafting a plan for achieving net-zero emissions by 2050.

It succeeded. Late on Thursday night, a watered-down communique was released, although some are now questioning at what cost.

Australia is meant to be in the midst of a so-called “step-up” in the Pacific, and Morrison came to the meeting stressing the vuvale (family links) between Australia and the region as Canberra gets increasingly jittery about China’s presence.

Pacific trip-up
But if the reaction from the region’s leaders in the past few days has been anything to go by, the step-up has tripped and tumbled some way down the stairs.

Marshall Islands Foreign Minister David Paul tweeted “Stepping-up means showing up. It means showing you are willing to play your own part in fighting the greatest threat to the Pacific and to the world.” That was later followed by: “The Pacific’s survival – and the Australian fruit industry – requires leadership on the greatest threat to our region and to the world.”

But the most cutting criticism was from Fiji’s Prime Minister, Voreqe Bainimarama, who said on Saturday that Australia had taken a “big step backwards” in its relationship with the Pacific. That came after he told The Guardian on Friday that Morrison’s approach during Thursday’s meeting was “very insulting and condescending.”

‘Insulting’ statements
“I thought Morrison was a good friend of mine; apparently not,” said Bainimarama, who was attending his first forum in more than a decade, after being suspended in 2009.

“The Prime Minister at one stage, because he was apparently [backed] into a corner by the leaders, came up with how much money Australia have been giving to the Pacific. He said ‘I want that stated. I want that on the record’. Very insulting.”

After playing it diplomatically in a news conference on Friday morning, where he was seated side-by-side with Morrison, Sopoaga didn’t hold back on Sunday, backing Bainimarama’s comments.

“We were overwhelmed by the promises of the step-up policy by Australia,” Sopoaga said. “Very un-Pacific, it was. I certainly hoped the leaders would come together and recognise the culture, the Pacific way of life.”

Words ignored
Referring to a speech by two youth leaders who called for action to save their homeland, Sopoaga said: “One leader was … shedding tears, he told me, ‘the words of those girls are cutting through my heart.’ Unfortunately one didn’t hear these words, and pretended not to hear these words. One guy, one guy deliberately decided to ignore these words.”

Sopoaga told the story of his days as a young diplomat in the early 1970s, in what was then the South Pacific Commission. The commission evolved into the forum as many countries became independent from colonisation. In those days, he said, independence leaders were frustrated that they couldn’t talk about their issues like environment, decolonisation or nuclear testing because “these colonial masters were pushing us down.”

“And I see now after so many years of us coming away to set up the Pacific Island Leaders Forum, we are still seeing reflections and manifestations of this neo-colonialist approach to what the leaders are talking about,” Sopoaga said.

Scott Morrison left Tuvalu asserting that the Australian government was committed to helping the region in its fight against climate change, and that there were efforts being made in Australia to curb emissions. He also announced an A$500m fund to help fund climate adaptation in Pacific countries.

And Australia did make some concessions in the communique. It backed a separate climate change statement committing countries to working in solidarity to combat it.

It also signed on to address climate financing, a commitment to phase out reliance on fossil fuels, and pledged to try to meet a target of 1.5 degrees. However, the wording is vague, and all references to coal have been scrubbed. And a “climate crisis” is only referred to for the small island states, not the whole region, which would include Australia.

Sopoaga said that despite the setbacks, he was still happy with what came from the forum. “It’s not perfect, but it is good,” he said. “I certainly believe we could have done much better.”

“We really need to step-up our game.”