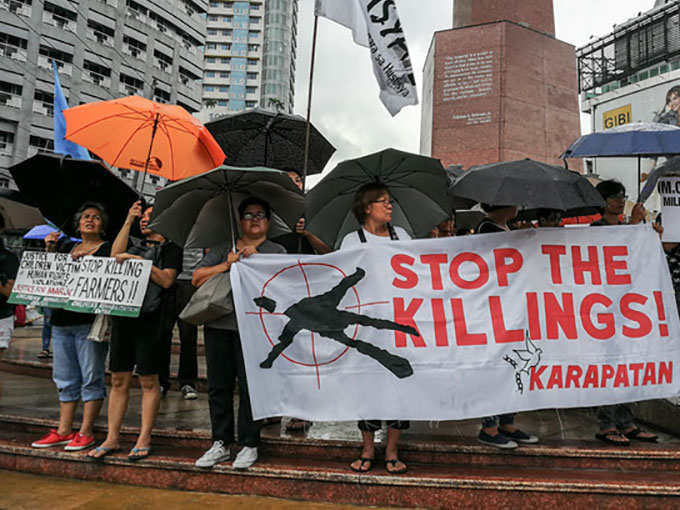 Duterte’s plan for Negros has been the subject of speculation in response to the killings in Negros Oriental, where a total of 21 people – many of them farmers – were killed in less than two weeks July 18-27, reports Rappler.

The deaths include a lawyer, a barangay captain, a city councillor, a former mayor, and a one-year-old child.

“We can see the pattern of human rights abuses in the Philippines is similar to the days of martial law under Marcos,” said the coalition in a statement.

People criticising the Duterte government were being branded as supporters or members of the New People’s Army (NPA).

“The pattern of killings and other human rights abuses is prevalent across the whole of the Philippines,” the statement said.

The latest extrajudicial killing happened on August 2 in Antipas, Cotabato, on Mindanao island in the southern Philippines.

Pastor killed
The victim was a pastor of the United Church of Christ in the Philippines (UCCP), Ernesto Estrella, 51, married, a resident of Davao City.

Estrella was visiting his relatives when he was shot point blank by two suspects who were riding on motorcycle.

On August 1, Duterte increased to 5 million pesos  (NZ$400,000) a reward for information leading to people being accused of responsibility for the deaths of four policemen in Negros.

Duterte’s pronouncement “puts anyone at risk of being killed”, said the coalition.

“Anybody could kill several persons, put a gun in their house or property and then claim that the victims are the killers of the four policemen in Negros.

“This will also spark more killings and unrest, which Duterte could use as a basis for declaring martial law in Negros or the whole of the Philippines.

“The Filipinos’ experience of martial law is horrendous. Martial Law is not the answer to the root causes of the armed conflict in the Philippines.”

Reform ‘not bullets’
Filipino farmers were demanding genuine agrarian reform “and not bullets”, the coalition said.

Filipino workers were demanding an increase in wages and an end to contractualisation.

Overseas Filipino workers were demanding job creation so that they were not forced to seek jobs outside the Philippines and away from their families.

“But Duterte has killed the Peace Talks just when the substantive agenda on CASER (Comprehensive Agreement on Socio Economic Reforms) was on the negotiating table.

“It is clear that Duterte is on the side of those who refuse to address the root causes of armed conflict in the Philippines,” claimed the coalition.

Defence Secretary Delfin Lorenzana said he had so far made no recommendation for martial law, reports Rappler.

“As of now, absent any recommendation from the AFP and PNP forces, intel reports and local government unit recommendation, I am not yet recommending martial law in Negros,” he said.

‘A vigorous cold front’: why it’s been so cold this week, with a chilly weekend on the way