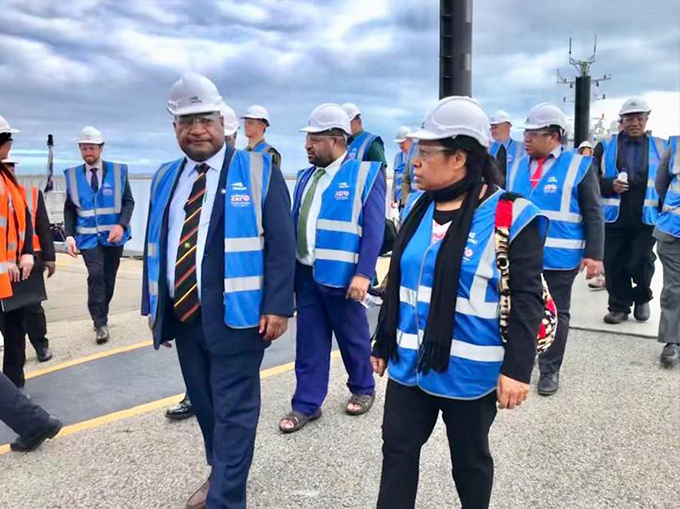 James Marape told The Guardian that Australia had “a moral responsibility … to the upkeep of the planet”, particularly given the extreme effect it was having on smaller Pacific nations.

“I don’t intend to speak from Canberra’s perspective, they have their own policy mindset, but as human beings I know they will respond to the moral obligation that is prevalent amidst us, that we are environmentally sensitive to the needs of others.”

He said the voices of smaller island nations must be listened to.

“As big countries in the Pacific – Papua New Guinea, Australia, New Zealand – we have a sense of responsibility to the smaller island countries, because displacement of these smaller communities will first and foremost be our neighbourhood responsibility,” Marape said.

In a wide-ranging interview, Marape outlined a vision for his country, to leave behind a history of wasted opportunities and squandered resources, and move towards a healthy and educated nation free of violence.

In May, after Scott Morrison led the Coalition to an election victory, Pacific leaders urged him to do more on climate change, saying Australia was “lagging behind”.

Marape, undertaking his first official visit to Australia last week, said he would “not be silenced” on environmental responsibility.

“We can have our resources but we must have it in an environmentally-friendly manner, so that we leave planet earth to the next generation not in the form we’ve inherited but a better form.”

He said he believed Australia, New Zealand, and PNG should lead the Pacific as a “bloc” of nations reconstructing their economies to handle resource productions in a more environmentally and socially sensitive way.

On Thursday Marape warned foreign companies already in PNG that he intended to crack down on regulatory compliance, and also shake up revenue processing to ensure PNG drew at least 50% in taxes and royalties.

He also wanted to see a shift towards an agricultural exports economy, as a “food bowl for Asia” rather than the current dependence on mining.

“For the amount of wealth the lord has blessed us with … the actual translation of this resource into improving peoples life hasn’t happened well in 44 years,” he told Guardian Australia.

“I don’t blame the past they lived at the time. They wrote the history, I’m going to write the future for our country.”

He said if his government didn’t get the balance right, future generations would blame them.

His comments followed an ambitious declaration on Thursday that the impoverished nation would be free of its dependence on Australian aid – more than half a billion dollars a year – within the decade.

He told Guardian Australia a prosperous PNG was a “win-win” for Australia.

“If we are independent economically, if we are solid and sustaining our own life, your taxes don’t need to come to us,” he said.

“We’ll keep the borders up north safe, we’ll have a better, friendly region up there, so the entire region is safe. If we disintegrate up there it affects Australia too.”