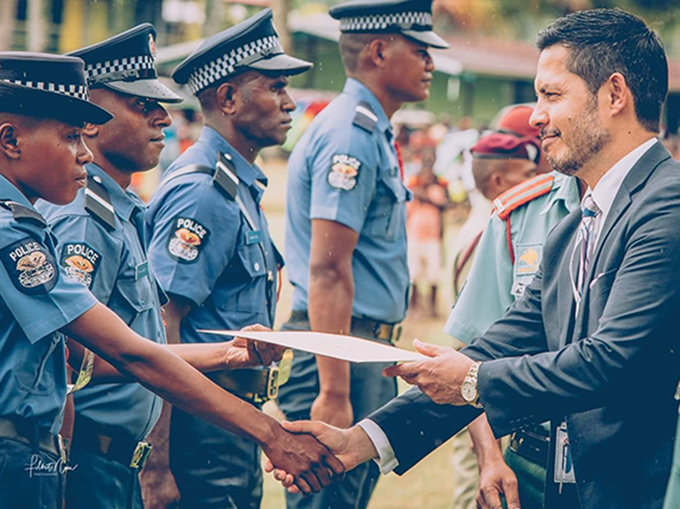 The recent horrific events in Hela Province have brought the role of the police force in Papua New Guinea into sharp focus.

We can only hope that Morrison, if he responds positively, will take considered advice on the matter and not charge off on some ill-advised scheme involving direct Australian intervention.

Probably the worst thing that Morrison can do is dither and fund some sort of too hard basket investigative consultancy, although I understand this has already been canvassed.

The situation in Hela and the way the police respond is essentially up to the Papua New Guinean government. What it needs from Australia right now is solid practical support in terms of funding and resources.

Police in “sorry state”
Papua New Guinea is well-aware that its police force is in a very sorry state and needs to be both considerably expanded and resourced.

James Marape may have various plans to change Papua New Guinea for the better but the most crucial change maker in his government is Police Minister Bryan Kramer.

As the minister responsible for law and order, he sits at the pivot point of any meaningful change process. If he performs well, and is supported by the Prime Minister, Papua New Guinea has a bright future.

Having a law abiding citizenry is an essential precursor for so many aspects of life in any nation.

Lawless society
Conversely, having a lawless society destroys national life and the opportunities available to it.

If Papua New Guinea was a law abiding nation it would have a vibrant and profitable tourism industry employing thousands of people.

If Papua New Guinea was a law abiding nation, violence against women and children would be considerably reduced.

At the moment most women and children have no recourse to justice if they are beaten and assaulted simply because the police resources are not there to deal with it.

Without fear of being brought to account Papua New Guinean men are free to exercise their most vile impulses.

If Papua New Guinea was a law abiding nation corruption could be brought down to manageable levels.

No fear of punishment
At the moment politicians, public servants and others engage in corrupt activities because they have no fear of being caught.

Citizens of a law abiding nation are much more inclined to report corrupt behaviour when they see it because they are much less likely to be the victims of reprisals.

If Papua New Guinea was a law abiding nation people would feel much safer in their day to day activities. They would be free to safely travel on the roads and venture out at night. Without the prospect of being robbed they would engage with each other freely in commerce.

If Papua New Guinea was a law abiding nation economic activity would flourish. More people would have jobs, especially those youths who are responsible for most of the petty crime. Drug and alcohol consumption would decline if people were gainfully employed.

How do we know all of these things?

Law abiding history
Because Papua New Guinea was once a law abiding nation.

If you don’t believe this, find an old grey lapun and ask them. They will tell you what it was like to leave their house unlocked, walk safely to the trade store, buy their goods and walk home without looking over their shoulder for potential thieves or assailants.

Bryan Kramer’s task is enormous. He will need more than the remainder of the government’s term in office to make sustainable inroads.

Not only has he got to rescue and rehabilitate a demoralised police force but he has to bring about cultural change.

He has to change the dog-eat-dog attitudes that currently exist and replace them with ones that respect not only the laws of the land but citizens respect for each other.

He can’t do it by himself and will need a lot of help. But he will be the pivot where change occurs.

I can’t think of anyone better to be that pivot.