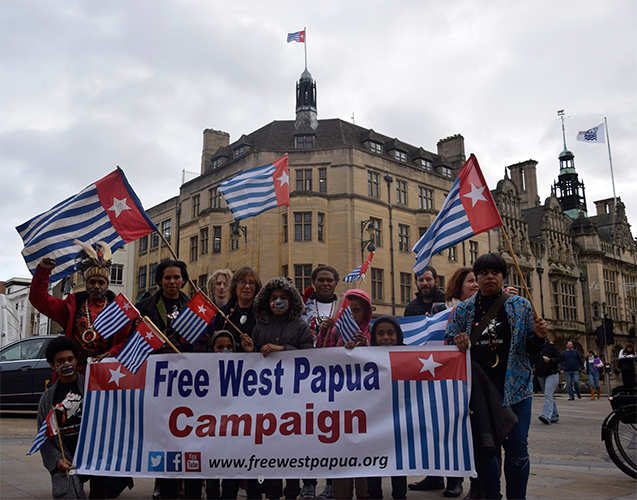 “Indonesia strongly condemns the award by the Oxford City Council for this person,” said the Indonesian Foreign Affairs Ministry in a written statement on Thursday July 18.

“Giving an award to this person shows the Oxford City Council’s lack of understanding about the behaviour of this person and the real situation in the provinces of Papua and West Papua, including the development and advances there,” the ministry said.

The ministry also said that the government’s position on the independence movement in Papua remains firm although it also expressed its thanks to the British government for consistently and fully supporting Indonesia’s sovereignty over Papua.

“Indonesia’s position on the separatist movement remains firm. We will not retreat one centimetre in upholding the [sovereignty of the] RI [Republic of Indonesia]”, it said using the term “separatist”, which the West Papuan movement rejects in favour of pro-independence.

“Indonesia respects the British government’s firm position of consistently and fully supporting the sovereignty and integrity of the Unitary State of the Republic of Indonesia and because of this the Oxford City Council’s position has no meaning whatsoever.”

In relation to the award, the British government asserted that it does not mean that the government supports Papuan independence.

“We support Indonesia’s territorial integrity and Papua as part of Indonesia,” said the British Foreign Affairs Department as quoted by BBC News.

The Oxford City Council decision to give the award to Wenda has no relationship with the British government’s position on Papua.

“Politically, the position of local councils are independent of the central government, so this represents the authority of the Oxford City Council,” the department said in conclusion.

The City Council awarded Oxford based Wenda its highest honour in recognition of his tireless fight for West Papuan self determination.

In a press release it said that “Oxford residents and the City Council have taken up the cause for their own.”

Wenda meanwhile said that he appreciates being given the award saying that it shows that Oxford City is concerned about justice and human rights for the Papuan people.

“This award shows that the people of Oxford have listened and responded,” he said.