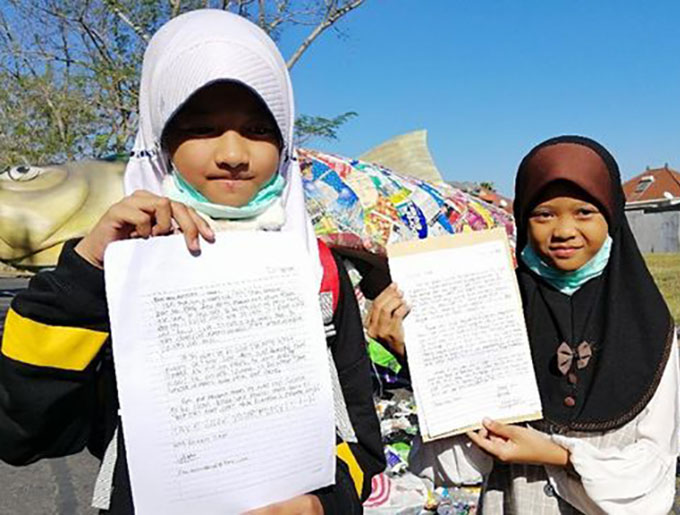 The letters were sent through the US Consulate-General in the East Java provincial capital of Surabaya, reports CNN Indonesia.

In an Indoleft translation, Nina is reported as saying that she wrote the letter as a protest against the US which illegally exports plastic waste into Indonesia that is contaminated with toxic and hazardous materials (B3).

READ MORE: Indonesia sends rubbish back to Australia as ‘too contaminated’ to recycle

“This is a letter to Mr President Trump, so that you don’t export anymore waste to Indonesia. Why should we suffer the impact, they should deal with their own rubbish”, said Nina in Surabaya last week.

Nina, who is a class 7 student at the Wringinanom 1 State Junior High School in Gresik, also expressed her regret that advanced countries such as the US are unable to deal with their own rubbish problems.

Instead of helping, the US instead disposes of it in Indonesia.

“We already have a lot of problems in Indonesia because of rubbish. Why is it being added to by America”, she said.

Sad over animal deaths
In her letter, Nina told Trump that she was sad at seeing wild animals dying because of plastic waste. One of which is a whale which was recently found dead with its stomach full of plastic rubbish.

Nina continued by saying that she did not want to see a future in which animals died as a result of plastic rubbish from the country led by Trump.

Speaking in the same vein, Zade, a class 6 Pogar 2 State Primary School student in Bangil, Pasuruan, challenged Trump by asking if the number one person in the country of Uncle Sam would like to suffer the same fate as turtles and whales to die because of plastic waste.

Zade said that in the area around her home many babies suffer from illnesses because of the smoke from burning plastic rubbish imported from the US.

“Do you want to be like the turtle with a plastic in their nose, whale died because their stomach are full of plastic. So many baby around me are sick because of the smoke from burning of plastic waste your country,” wrote Zade in English in her letter.

Other protests
She also asked that Trump take back his plastic rubbish and not turn Indonesia into his country’s rubbish ground.

Aside from Nina and Zade, a six-year-old boy Ramadhani Wardana also took part in a protest against the importation of waste from the US.

Warda, as he is often called, even gave a speech during an action by the Brantas River Coalition to Stop Imported Plastic Trash (Bracsip) at the US Consulate-General in Surabaya on Friday.

“Take back your trash!,, said Warda waving a red-and-white Indonesian flag tied to a bamboo pole.

Maternal metamorphosis: how mothering has changed in Australia since the second world war

Who are the ‘Original Sovereigns’ who were camped out at Old Parliament House and what are their aims?