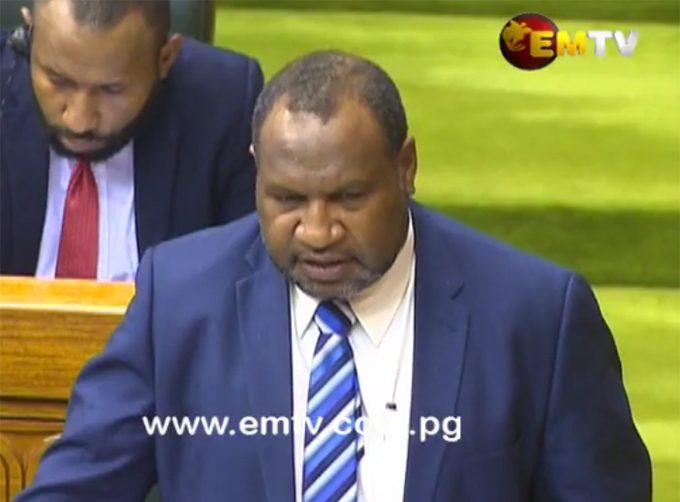 Deputy Prime Minister Davis Steven has been tasked to set boundaries on the terms of reference and set a timeframe to complete Papua New Guinea’s proposed Commission of Inquiry into the UBS Loan Report. Video: EMTV News

By Miriam Zarriga in Port Moresby

He said during question time in Parliament yesterday that he was open to total scrutiny but insisted all other players, including private lawyers, accountants, Oil Search, Kumul Petroleum Holdings Limited, and all members named in the report, including former prime minister Peter O’Neill, would be open to the commission of inquiry.

Marape said the Australian Security Commission would be asked to provide information on the loan while the UBS commission of inquiry would act as a precursor to what the Independent Commission against Corruption (ICAC), would eventually be and would continue as a buffer for corruption into the future.

“The UBS report that was furnished in this House and emanates from the Ombudsman Commission was more geared towards establishing the culpability of leadership breaches in the context of those of us who held offices in relation to our subscription to the Leadership Code of conduct,” he said.

“When I made the announcement in response to the tabling of this report, it was my humble opinion that a greater cry was out there. While the focus was on those of us that hold leadership the offices pertaining to the subscription of Leadership Code, the UBS saga extends beyond leadership breach and culpability that relates to the leadership, a greater step back and a dive into the entire UBS saga in the first instance.

“The OC report is one that has come out for the benefit of the public and Parliament and for the benefit in the instance for the OC to pick on and expand beyond just a report, and see those of us implicated and breach of the leadership code and for them to initiate individual proceedings in this manner,” Marape said.

Terms of reference
“The COI (commission of inquiry) must be established to fully ascertain whether there are other corruptions involved in the entire saga, an inquiry will be set up on the earliest I have asked the Deputy Prime Minister and Attorney-General to bring into Cabinet at the earliest a paper that will entail the inquiry start, when it will terminate and what the boundaries of the Terms of Reference of the inquiry.

“The investigations will not stop at the leadership level and that involves some of us including the former prime minister, in the process of UBS our country lost money and lost in the billions and we need to know exactly how much we lost.

“Oil Search will be asked to answer several questions including what happened to the 10.01 per cent of shares the country should have a share in, with KPHL asked on their involvement in the UBS loan as well.

“And in the name of giving honest sincere answers to the public who demand accurate information on what has taken place.”

Marape said the commission “must be established to fully ascertain whether there are other corruptions involved in the entire saga because the question is whether there is corruption in the UBS transaction”.

He added the inquiry “must establish who are the middlemen, the nation talks about corruption.

Leadership breach?
”We need to establish not only Leadership Code breach but entire criminality in it if there was any criminal offence conducted by anyone”.

“Money flowed from UBS to purchase of Oil Search shares, what happened beyond the Oil Search share, did PNG government spend any money it? The nation deserves greater scrutiny instead of just leadership scrutiny, how much did we lose in the process and revenue that was meant to support the budget of 2014-2016 if we did lose it, the inquiry must ascertain and establish exactly how much we lost,” Marape said.

“We want this to be concluded at the earliest and questions must be framed to make up the terms of reference when it is established.”

Miriam Zarriga is a reporter with the PNG Post-Courier.